The international satellites — one from Lithuania, four each from Luxembourg and the USA 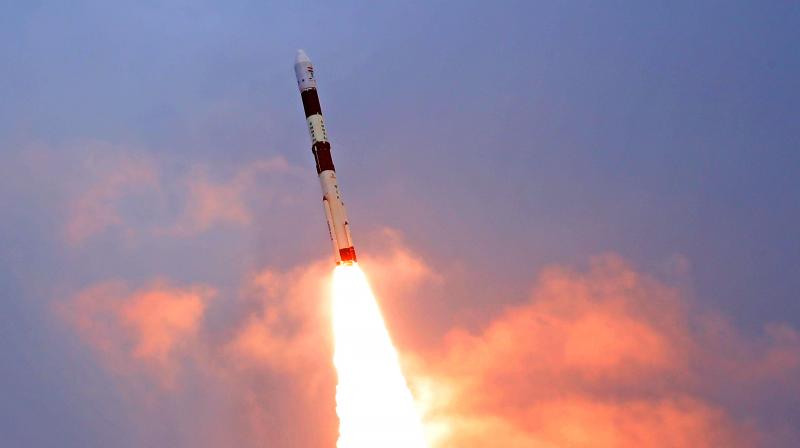 Nellore: In its first launch this year, India’s workhorse rocket, the Polar Satellite Launch Vehicle, placed the Earth Observation Satellite (EOS-01) and nine foreign satellites into their designated orbits after a textbook-perfect blast-off from the spaceport at Sriharikota near Nellore on Saturday.

Minutes before the launch, heavy downpour and lightning at the Sriharikota range (SHAR) caused some concern at the mission control in the Satish Dhawan Space Centre (SDSC). The countdown was halted 18 minutes before launch.

After hectic deliberations, the scientists led by Dr K. Sivan, Indian Space Research Organisation (ISRO) Chairman and senior scientists S. Somanath and P. Kunhikrishnan decided to postpone the launch by nine minutes. The countdown resumed, and the rocket, designated PSLV-C49, blasted off  at 3.11 pm instead of the scheduled 3.02 pm.

After 15 minutes and 20 seconds, EOS-01 was injected into its orbit. Subsequently, nine commercial satellites were released into their intended orbits.

After separation, the two solar arrays of EOS-01 were deployed automatically and the ISRO Telemetry Tracking and Command Network at Bengaluru assumed control of the satellite. In the coming days, the satellite will be brought to its final operational configuration.

“PSLV-C49 successfully placed all ten satellites precisely into their 575-km orbit,” Dr Sivan declared and congratulated the launch vehicle and satellite teams for rising to the occasion amidst the Covid-19 restrictions.

EOS-01, earlier known as RISAT-2BR2, is an earth observation satellite intended for applications in agriculture, forestry and disaster management support.

The international satellites — one from Lithuania, four each from Luxembourg and the USA – were launched under commercial agreement with NewSpace India Limited (NSIL), department of space.

The Lithuania satellite, R2, is a technology demonstrator while the Luxembourg satellites, Kleos (KSM-1A/1B/1C/1D), are designed for maritime applications. The USA satellites, named Lemur (Lemur-1/2/3/4), are meant for multi-mission remote sensing.

ISRO used the PSLV-DL variant, which has two strap-on boosters with 12 tonnes of propellant, for the mission. This variant was first used to launch a Microsat-R satellite on January 24, 2019.

This was the 51st launch of the PSLV, the 76th launch vehicle mission from the SDSC and the 38th launch from the first launch pad at SHAR.

The success of the mission, the first since the Covid-induced lockdown in March, was a big relief to the ISRO authorities whose plans to launch at least 10 missions this year were affected by the pandemic.

ISRO took almost three months for the launch of Saturday’s mission due to the Covid-19 regulations which mandated use of limited manpower. ISRO closed the rocket launch viewing gallery for the public and the media was not allowed to witness the launch from the space centre.

In view of the Covid-19 guidelines, former chairmen of the Indian Space Research Organisation (ISRO) and directors of various ISRO units were not invited to witness the launch.