Technology   In Other news  09 Apr 2020  What a good scout! 12-year-old boy designs, 3D-prints ear guard for health staff wearing masks all day
Technology, In Other news 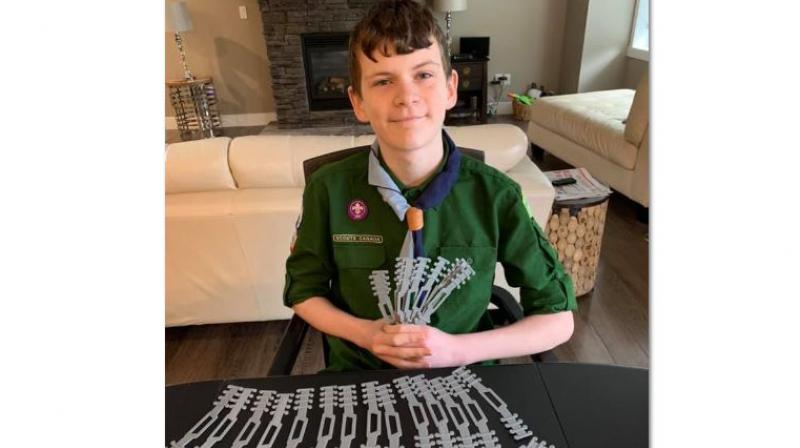 The 3D printed ‘ear guard’ that Quin Callander produced has several grooves on which the elastic strap of a mask can be looped. This allows the user of the ear guard to adjust the mask’s elastic strap to cover their face tightly but without putting pressure on their ears. (Photo | Facebook - Heather Roney)

Chennai: A 12-year-old boy scout in Vancouver, Canada has developed a simple but clever solution to the problem of ear straps of masks causing pain to healthcare workers who have to wear them all day.

When Quinn Callander heard that doctors, nurses and paramedics had severe ear pain and soreness from wearing masks over long shifts, he thought up an idea to help ease the pressure and prevent chafing behind the ears.

He worked out several design for a plastic strap that he could produce using his 3D printer, and finally settled on a workable model.

Callander then set about printing the prototype—a strap that goes around the back of the head to which one could attach the elastic of the mask. The 3D printed ‘ear guard’ has several grooves on which the elastic strap of a mask can be looped. This allows the user of the ear guard to adjust the mask’s elastic strap to cover their face tightly but without putting pressure on their ears.

The ear guard is made of a kind of plastic commonly used in 3D printing called polylactic acid, which is relatively cheap, Fast Company reported.

The young boy, who is keeping his Scout’s oath of Duty to Others, has produced more than 1,700 ear guards since March. Demand for his handy accessory soared since he distributed his initial batch to hospitals in Vancouver.

Callander has since put his design online on the open source 3D printing community Thingiverse, from where anyone can download it and 3D print the ear guards.

Following his lead, a volunteer group that Callander works with has also printed 5,000 ear guards and given it out to hospital workers. “Seek out your local health care providers, ask if this would help them, and get your printers going!” Callander wrote on his Thingiverse post.