Technology   In Other news  10 Mar 2020  Spotify's new home screen gets the smarts, suggests playlists to suit your routine
Technology, In Other news

Spotify's new home screen gets the smarts, suggests playlists to suit your routine 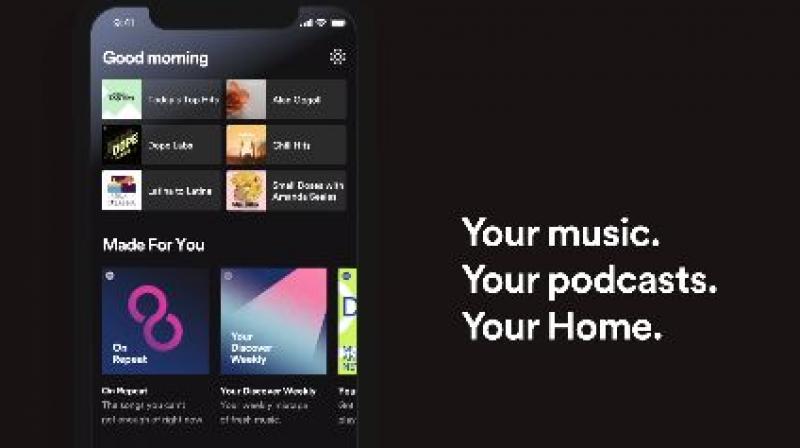 The transition throughout the day happens on six tiles on the top of the new home screen. (Photo | Spotify)

Chennai: With several music apps vying for your attention, Spotify has come up with a smart upgrade to its home screen, making it somewhat intuitive for your convenience.

What you get is a homescreen that suggests your favourite playlists depending on your routine at different times of day. Open the app in the morning, and along with a ‘Good Morning’ greeting it could suggest a playlist for your workout, later a podcast for your office commute, and perhaps at night a soothing collection of songs to help you wind down.

Spotify does this by learning your pattern of listening to music and podcasts. The transition throughout the day happens on six tiles on the top of the new home screen.

Below these tiles are Spotify’s recommendations, which it bases on learning your preferences as you use the app. And as usual, it also shows you what’s popular in general.

The upgraded home screen is available on both the Android and iOS apps.

Earlier, the Spotify home screen highlighted your ‘Recently Played’ and ‘Top Podcasts’ on the home screen.

With its revamped more personalised home screen, Spotify hopes to attract lots of new users and enable greater user engagement. In India, Spotify needs to ensure it doesn’t lose out to the new kind on the block, Resso, a music app recently launched by TikTok developer ByteDance. Resso, like TikTok, is one of the most engaging apps, with its focus on user-generated content.