Twitter has locked horns with New Delhi this month over the order to remove more than 1,100 accounts and posts on farmer protests 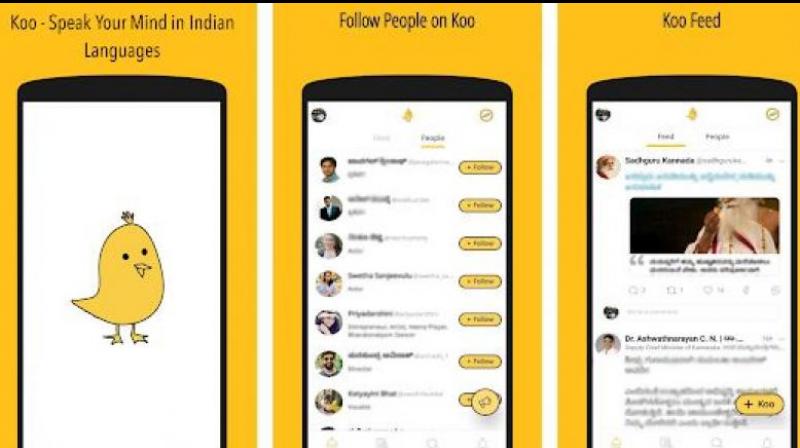 Koo is a Twitter-like micro-blogging platform which allows users to post multimedia content, including audio clips. (by arrangement)

New Delhi: Indian social-media app Koo is witnessing a surge in popularity, fuelled by politicians and others flocking to it after U.S. rival Twitter Inc refused to follow a government order to block certain content on its platform.

Twitter has locked horns with New Delhi this month over the order to remove more than 1,100 accounts and posts which the government says are spreading misinformation about farmer protests against new agricultural laws.

The dispute escalated on Wednesday when Twitter said it did not fully comply with some requests as it believed they were not in line with Indian law.

Koo said downloads had surged 10-fold in the past two days to over 3 million. Meanwhile #kooapp was the top Twitter trend in India on Wednesday with nearly 21,000 posts, followed by #BanTwitter.

Koo is a Twitter-like micro-blogging platform which allows users to post multimedia content, including audio clips. A text post is restricted to 400 characters and the service supports six Indian languages, including English.

Like Twitter, Koo’s logo is a bird, though yellow in colour. It allows users to use hashtags (#) or the “@” symbol for mentions. The app also allows users to ‘re-koo’, Koo’s version of a retweet and chat instead of a direct message.

How did it start?

Koo was founded by Aprameya Radhakrishna and Mayank Bidawatka, both MBA, or business management, graduates. The duo are also the founders of Vokal, an audio-video knowledge-sharing platform similar to Quora.

The app was launched in March 2020, and won an government award for driving tech innovation. It raised more than $4 million in funding last week from new and existing investors including venture capital firms Accel and 3one4 Capital.

Who is on Koo

For years, Twitter has been a major public communication tool for the Indian government. But several ministries and high-profile figures, including Bollywood actors, have also gradually begun using Koo in recent months. The technology ministry and trade minister Piyush Goyal joined this month.

Koo is however still dwarfed by Twitter, which had 17.5 million users in India as of last month, its third highest user base after the United States and Japan, according to German database firm Statista.

Prime Minister Narendra Modi, who is yet to join Koo, spoke about the app last year in his monthly radio address. “It’s called Koo,” he said. “In this, we can place our opinion and interact in our mother tongue through text, video or audio.”

What its founders say

The sudden increase in Koo’s popularity can be compared in some respects to the surge in the use of digital payments apps in India following a ban on high-value currency notes in late 2016, Koo’s co-founder Bidawatka told Reuters.

“You could say this is something similar, because a certain event happened and lot of people want to move here... There is a surge at an unexpected time and lots of people are talking about us.”

Radhakrishna posted a hiring alert for engineers on LinkedIn on Wednesday.