Technology   In Other news  11 Mar 2019  India’s 1st AR/VR International Film festival and Conference took off with success
Technology, In Other news 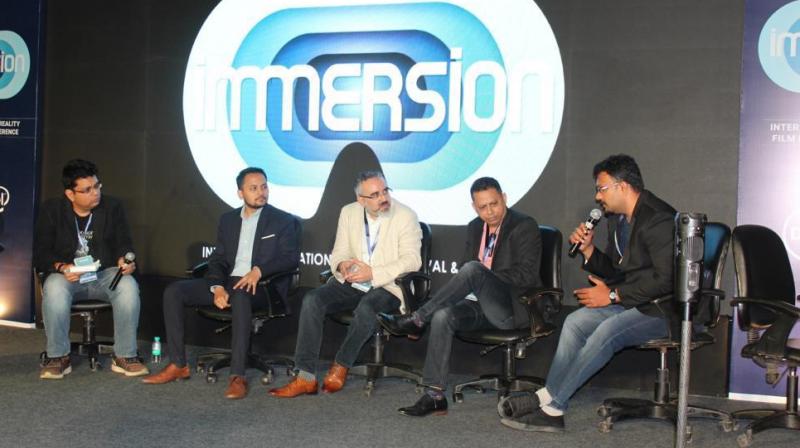 Immersion-India’s 1st Virtual Reality Film Festival & Conference held on the 1st – 2nd March 2019 at the Nehru Centre in Mumbai, India was a massive success, it drew the movers and shakers of the AR/VR/MR industry folks in Mumbai.

The two day event had Workshops led by industry thought leaders, Expo Space & VR Screening Zones where one could experience some of the top Local & Global Award winning VR Content plus Interactive Games. At the centre of Immersion two-day conference were panel discussions, where 45 prominent personalities from established companies, start-ups, independents from the Indian and global AR/VR industry, shared their expertise in implementing or developing immersive technologies for such industries as healthcare, education, ecommerce, entertainment, gaming, advertising, travel & tourism, among others.

The Indian AR/VR market is nascent but is expected to achieve a compound annual growth rate (CAGR) of 76 per cent over the next five years. This will primarily be driven by demand from business and consumer sectors. There are over 170 AR/VR start-ups in India, 60 per cent of which were established in the last 2 years. The majority of these start-ups are located in the Indian cities of Bengaluru (Bangalore) (27 per cent), Delhi (25 per cent) and Mumbai (13 per cent). Investment remains a problem for AR/VR start-ups in India. Only a handful of startups in AR and VR have received any form of capital investment, with the top 15 having raised under $3 million in funding.

“Over a year and half of hard work has gone behind in building this platform but feeling very blessed with the way Immersion Fest’s 1st edition has shaped up. Industry leaders are now calling it the ‘Flagship Event for AR/VR in India’. My humble desire in building Immersion was and will always be to nudge India’s AR/ VR industry forward, build a community and push drive adoption, be it for enterprise or consumers. For the 2nd edition, we will have capsules where we will bring investors & startups together. Capsule for the education industry, Bollywood industry, engage the Government plus trade organisations & embassy’s for building bilateral exchange programme, we are speaking with UK, Canada, Australia, Ireland and Israel embassy, Immersion India’s 1st VR Fest is happy to synergise with like minded and Build a Bigger Better Experience for the 2nd Edition in 2020,” said Eddie Avil, Founder Director for Immersion VR Fest.