Technology   In Other news  11 May 2020  This wearable covid sensor could help monitor symptoms early, manage disease better
Technology, In Other news 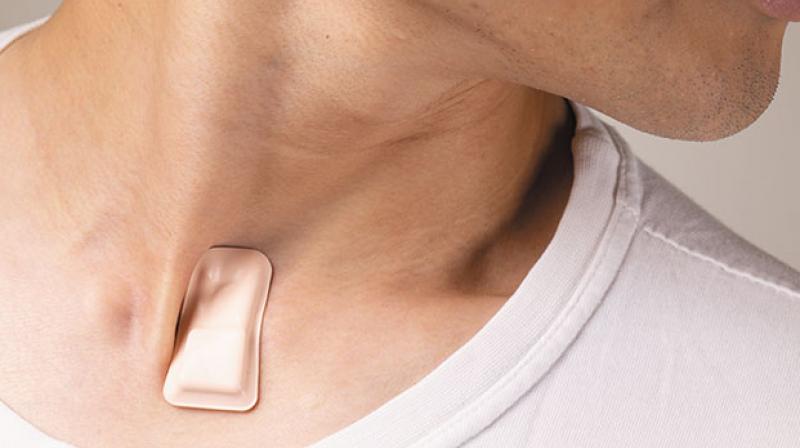 The sensor, a flexible band-aid-like sticker made of soft silicone material, is stuck on the neck at the lower throat, and works by constantly measuring vibrations from coughing, chest wall movements, respiratory sounds and heart rate as well as body temperature. It produces insights using machine learning. (Photo | Northwestern University)

Chennai: Just yesterday, a report quoting University of Minnesota scientists said the coronavirus is likely to remain a menace for another two years! Day before yesterday, Health Ministry Joint Secretary Lav Agrawal said we have to learn to live with the virus. If that is so, monitoring people for early symptoms becomes crucial in our attempt to get life back to some semblance of normality.

The sensor, a flexible band-aid-like sticker made of soft silicone material, is stuck on the neck at the lower throat, and works by constantly measuring vibrations from coughing, chest wall movements, respiratory sounds and heart rate as well as body temperature.

Arun Jayaraman, a research scientist at Shirley Ryan AbilityLab, was quoted as saying on the Northwestern University website that his team is developing custom signal processing and machine-learning algorithms to train the device on recognising coughs.

The vibration data of infected and non-infected persons is fed into a cloud. Machine learning software picks up on the variations, which enables it to create signatures of vibrations both pertaining to COVID-19 symptoms, as well as those indicative of normal breathing or chest sounds.

From these signatures, it is able to match COVID-19 symptoms when it presents itself in newer patients.

“As the algorithm becomes smarter, our hope is that it will begin to discriminate among which coughs are COVID-like and which are from something more benign,” Jayaraman says.

What could be better

Currently, the sensor does not measure blood oxygenation levels, which is particularly important as many COVID-19 patients do not show any respiratory distress but have low blood oxygenation, which could result in death.

Northwestern University’s John A Rogers says the team has earlier incorporated such a capability into clinical grade monitoring devices for intensive care units, and it can be replicated in the COVID-19 sensor.

About 25 affected individuals began using the devices two weeks ago. Dr Mark Huang, a physician at Shirley Ryan AbilityLab, who has worn the sensor himself says, “The sensor also will offer clinicians and patients peace of mind as it monitors COVID-like symptoms, potentially prompting earlier intervention and treatment.”

“This opens up new telemedicine strategies as we won’t have to bring in patients for monitoring,” Jayaraman says.

The device came about as a result of earlier research by Rogers’ and Jayaraman’s labs that monitored swallowing and speech disorders in patients recovering from stroke. It was tweaked to measure vibratory signatures of COVID-like symptoms.

The team is already producing dozens of devices per week.