Technology   In Other news  11 Jun 2020  Amazon halts police use of its facial recognition tech for a year till rules are framed to prevent misuse
Technology, In Other news

Two days ago, IBM announced that it would stop selling facial recognition tech for general purposes to prevent its use in racial profiling. 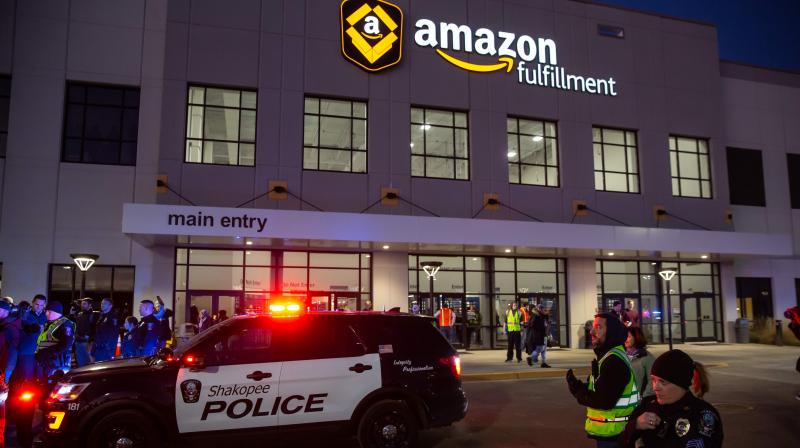 In this file photo taken on December 14, 2018, police officers put barricades during a protest at the Amazon fulfillment center in Shakopee, Minnesota. - Amazon on June 10, 2020, announced a one-year ban on letting police use its facial recognition technology, calling for strong government regulations for its ethical use. The moratorium comes after repeated calls by critics and racial justice groups for Amazon's cloud computing unit to stop providing police and immigration officials with tools that can be used to unfairly target people based on race. (Photo | AFP)

San Francisco: Amazon on Wednesday announced a one-year ban on letting police use its facial recognition technology, calling for strong government regulations for its ethical use.

The moratorium comes after repeated calls by critics and racial justice groups for Amazon’s cloud computing unit to stop providing police and immigration officials with tools that can be used to unfairly target people based on race.

“We’re implementing a one-year moratorium on police use of Amazon’s facial recognition technology,” the Seattle-based computing and retail titan said in a blog post.

“We hope this one-year moratorium might give Congress enough time to implement appropriate rules, and we stand ready to help if requested.”

The announcement came after a coalition of racial justice groups this week launched an online petition calling for Amazon to cut all ties with police and US immigration officials.

Amazon’s “surveillance empire” could be used by police to target people by race, making the company complicit in such abuse, Media Justice and other petition backers argued.

It was not clear to what degree Rekognition was used by police or immigration agencies.

Ring cameras sold by Amazon are used for home security, but people can share access to surveillance video with police if they wish.

Amazon said organizations such as the International Center for Missing and Exploited Children and Marinus Analytics will be able to continue using Amazon Rekognition to help rescue human trafficking victims and reunite missing children with their families.

“We’ve advocated that governments should put in place stronger regulations to govern the ethical use of facial recognition technology,” Amazon said in the post.

“And in recent days, Congress appears ready to take on this challenge.”

Amazon shareholders last year rejected proposals to prohibit sales of facial recognition technology to governments and study how it might threaten privacy or civil rights.

The failed proposals were put forth by a group of shareholders but opposed by the board of directors at Seattle-based Amazon.

IBM this week said it is no longer selling general purpose facial recognition software and is opposed to using such technology for racial profiling or mass surveillance.

The century-old technology firm called for responsible national standards regarding how facial recognition systems should be used by police agencies.