Technology   In Other news  12 May 2020  No theatres open, Bachchan, Akshay, Vidya Balan films set to stream on Netflix, Hotstar, Amazon Prime
Technology, In Other news 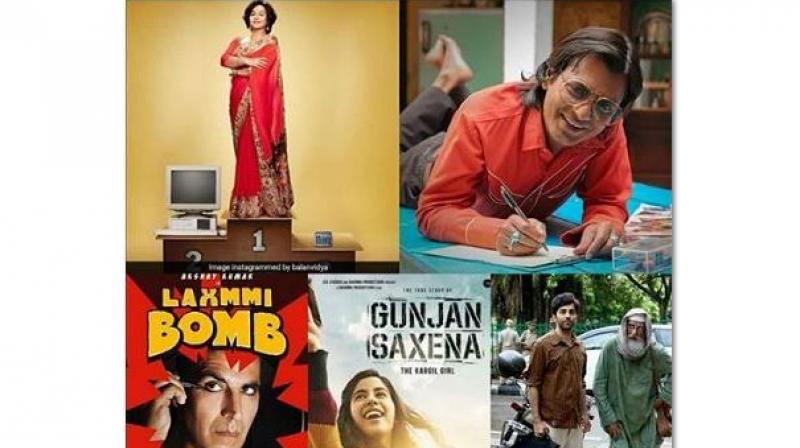 Most plans are shrouded in secrecy with officials reluctant to come on record. But the list of 2020 films that will be released on streaming platforms is long, said insiders. (Photos | Instagram)

Mumbai: Big ticket releases such as Amitabh Bachchan’s Gulabo Sitabo may bypass theatres and premiere directly on digital platforms, being seen as a potential saviour for the film industry in a year marred by the COVID-19 pandemic and uncertainty over when cinemas will open.

Faced with the question of going ‘direct to digital’ or waiting for theatres to open after the situation improves, many filmmakers and production houses are exploring the option of heading to streaming platforms, industry insiders said.

Shoojit Sircar’s Amitabh-Ayushman Khurrana starrer Gulabo Sitabo, Anu Menon’s eponymous biopic on math genius Shakuntala Devi, with Vidya Balan in the title role, as well as Chehre, another Amitabh film, are among the films likely to be released soon on a streaming platform.

“The deal of releasing ‘Gulabo Sitabo’, a quirky comedy set in Lucknow, and ‘Shakuntala Devi’ on Amazon Prime Video has been locked. The official announcement for both the films is most likely to be made this week,” a source close to the streamer told PTI.

Ronnie Lahiri, producer on “Gulabo Sitabo”, neither confirmed nor denied reports when PTI reached out to him but asked journalists to wait for an official statement.

An insider on the team of “Shakuntala Devi” also did not comment about the film’s digital release.

“Given how the lockdown is panning out, a digital release for ‘Chehre’ is being mulled,” Pandit said, adding they would wait till the first week of June to take a final call.

The one official announcement was the release of Nawazuddin Siddiqui’s film “Ghoomketu”, which streamed on ZEE5 last week.

Most other plans are shrouded in secrecy with officials reluctant to come on record. But the list of 2020 films that will be released on streaming platforms is long, said insiders.

Top on the list is Laxmmi Bomb, featuring Akshay Kumar and backed by Fox Star Studios, which has reportedly been picked up by the recently launched service Disney+ Hotstar. However, Hotstar representatives maintained a “no comment” stance as did producer Tusshar Kapoor.

The movie, directed by Raghava Lawrence, was scheduled to be released on May 22 in theatres. That is unlikely to happen with no signs of cinema theatres opening even if the lockdown ends.

However, Advani said the film is currently being edited “despite physical constraints” and the team is optimistic it will be ready “very soon”.

“We are exploring all possible avenues. Nothing stands confirmed or committed. As soon as we are clear about the way ahead, we will make a statement,” he said.

Bhushan’s T-Series’ has two other films, Ludo and Jhund.

While questions sent to Bhushan on the slate of his films were unanswered, a source from the production house confirmed that T-Series is planning to release its films digitally and talks are currently on.

There are also some producers who want to wait it out.

Producer Jackky Bhagnani, who was looking forward to the theatrical release of  Coolie No 1 on May 1, said he is not thinking about films right now.

“Let us overcome this crisis and we will announce in happier times,” Bhagnani said when asked about whether he was looking at releasing the film digitally.

Reliance Entertainment said it will wait to release two of this year’s most awaited films — Akshay starrer Sooryavanshi, and ‘83’, fronted by Ranveer Singh.

The team will wait for the lockdown to be lifted and release these movies in theatres.

“We will first complete the film then we will wait. If six or nine months down the line the situation becomes much worse we will take a call at that time. There is no hurry. Same is the case with Sooryavanshi and our other films,” Reliance Entertainment Group CEO Shibashish Sarkar told PTI last month.

“There is a lot of big money involved. Also, if you release on OTT you cannot release it in theatres. If you release a film in theatre it will come on satellite as well as digital later,” said trade analyst Taran Adarsh.

Last week, the Multiplex Association of India (MAI) appealed to studio partners, producers, artistes and content creators to support the cinema exhibition sector by holding their films and releasing them in theatres once they reopen.

The statement followed reports that several films were looking at a direct to digital release amid the lockdown.

The combination of “pent-up demand” and the promise of new movies would boost film business and contribute massively in reviving the industry, the association said.

“The collective, social experience of watching films on the big screen needs to be preserved and it can be done so only with the collective support of all stakeholders,” the statement from the body read.

“One can’t say the film will lose or gain from a digital release, because when you release a good film in theatres, the sky is the limit,” Adarsh added.