Trump is blocking chipmaker Broadcom from pursuing a hostile takeover of US rival Qualcomm. 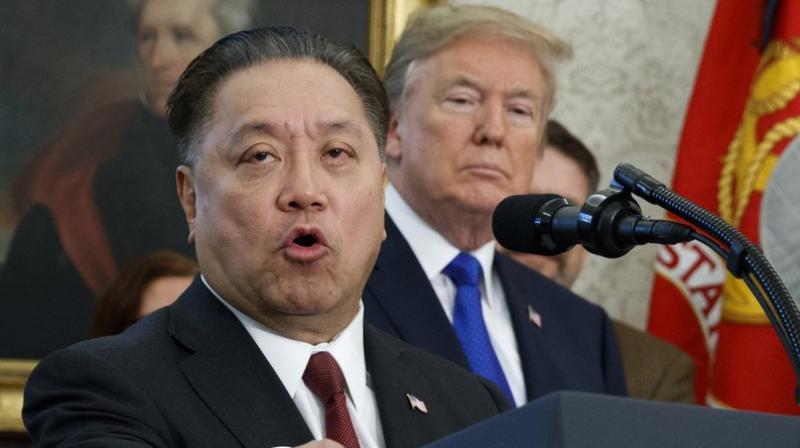 This photo shows Broadcom CEO Hock Tan speaking while US President Donald Trump listens, in background, during an event at the White House in Washington, to announce the company is moving its global headquarters to the United States. (AP Photo/Evan Vucci, File)

President Donald Trump blocked Singapore chipmaker Broadcom from pursuing a hostile takeover of US rival Qualcomm, ruling the proposed combination would imperil national security. The decision, announced late Monday, abruptly ends Broadcom’s four-month, $117 billion bid to buy Qualcomm — a deal that would have been the largest ever completed in the technology industry.

In a statement, Broadcom said it “strongly disagrees” that the acquisition raises any national-security concerns. Qualcomm did not immediately respond to a request for comment. Trump’s order gives Broadcom few options other than to drop its bid, said Macquarie Securities analyst Srinivas Pajjuri.

Broadcom faced challenges almost from the start of its quest. Qualcomm quickly spurned its unsolicited suitor and continued to resist even after Broadcom raised its original offer from $103 billion. Broadcom’s Singapore connections complicated matters, even though the company maintained its physical headquarters in Silicon Valley and virtually all of its shareholders are in the US.

The Trump administration nevertheless baulked at the prospect of a prominent US chipmaker being owned by a foreign company, particularly at a time countries around the world are gearing up to build ultra-fast “5G” mobile networks that could tip the balance of power in technology.

Although its name isn’t widely known outside the technology industry, Qualcomm is one of the world’s leading makers of the processors that power many smartphones and other mobile devices. Qualcomm also owns patents on key pieces of mobile technology that Apple and other manufacturers rely upon in their products.

Qualcomm is fending off allegations of complaints filed by Apple and government regulators around the world that it has abused the power of its mobile patents to throttle competition and charge excessive royalties for its technology.

Broadcom CEO Hock Tan had seized on Qualcomm’s legal headaches in his attempt to persuade the US government to keep the deal alive. “Qualcomm faces a number of challenges that hamper its role in developing 5G,” Tan wrote in a letter sent to US Congress last week. Unlike Qualcomm, Tan said, Broadcom financed its innovation through “lawful practices.”

Trump decided to squelch Broadcom’s bid on the recommendation of the Committee on Foreign Investment in the United States, which reviews foreign purchases of US entities. The decision didn’t come as a surprise. Earlier this month, the committee branded the proposed deal a potential security risk that could hobble the US’s ability to make the smooth and quick transition to 5G.

In an attempt to ease those worries, Broadcom last week pledged to make the US a leader in the race to build 5G networks, saying it would create a $1.5 billion fund to support the effort if took control of Qualcomm. Broadcom also tried to curry favour by moving its legal headquarters from Singapore to the US within the next few weeks.

Singapore became Broadcom’s legal home two years ago after it was sold to Avago, a company that once was part of Silicon Valley pioneer Hewlett-Packard. Broadcom’s company’s physical headquarters are already in San Jose, California — about 450 miles from Qualcomm’s headquarters in San Diego.

Trump hosted Broadcom’s Tan in the White House last year when the executive announced the proposed move. Now that Broadcom has been shoved aside, Qualcomm will be under pressure to prevent its stock price from sinking while trying to complete its own proposed takeover — a proposed $43 billion purchase of NXP Semiconductors.

“Now it’s on (Qualcomm’s) management to deliver on what they promised,” Pajjuri said.