Driverless cars give hope to blind - are automakers onboard?

Self-driving-car advocates say that in addition to helping the disabled, the vehicles will allow people to do other tasks while driving. 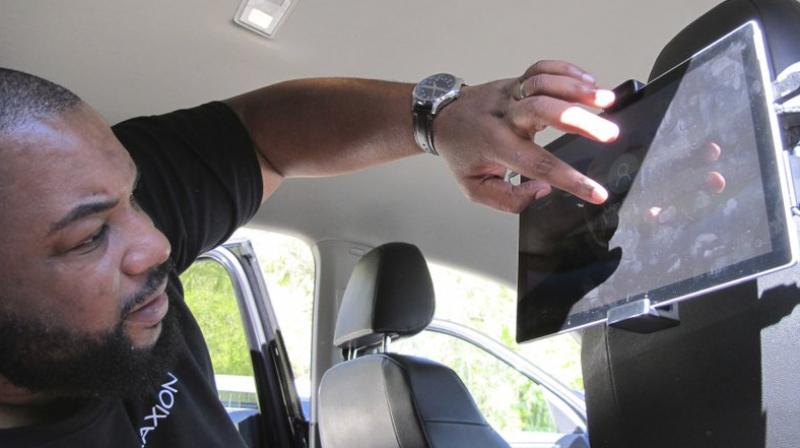 In 2012, Steve Mahan, who is blind, climbed into the driver’s seat of a self-driving car and rolled up to the drive-thru of a Taco Bell in a video that’s been viewed more than 8 million times online. The piece, produced by Google, captured the potential of autonomous-car technology to change the lives of the visually impaired.

“It was my first time behind the steering wheel in seven years and was absolutely amazing,” Mahan said.

Self-driving-car advocates say that in addition to helping the disabled, the vehicles will allow people to do other tasks while driving and make roadways safer by removing human error.

But six years after Google’s viral video, national advocates for the estimated 1.3 million legally blind people in the US are worried the industry is not factoring their needs into the design of the new technology, a mistake they say will make the cars more expensive and harder for them to access.

“Although we have been held up as obvious beneficiaries of the technology in conversations and presentations, this will have just been exploitation if the systems are not accessible,” said Anil Lewis, executive director of the National Federation of the Blind’s Jernigan Institute.

“How about instead of Taco Bell, we demonstrate a blind person independently operating an autonomous vehicle, dropping off his/her kids at school on the way to work, and maybe stopping by a Starbucks on the way?”

The concerns are fueling new research outside the auto industry to develop data and software meant to help ensure the needs of the blind are met when autonomous cars become commonplace.

In a University of Florida study, blind people are using experimental software that could be easily installed in cars and peoples’ phones. On a recent sunny winter day in central Florida, Sharon Van Etten eased into the backseat of an SUV and began speaking to a computer screen in front of her.

“Where do you want to go?” the computer’s voice responded.

Van Etten, who is legally blind, said “Kmart,” and of the car sped, the computer’s voice intoning, “Central Christian Church on the left” and other landmarks as they coasted down the street. When the driver pulled the car up to the store, the voice told Van Etten which side to exit from and mentioned some of the obstacles she’d face between the car and the store entrance.

University of Florida researcher Julian Brinkley developed the program, which he has named “Atlas.” Using data he collects from users like Van Etten and others through collaboration with the Florida Center for the Blind in Ocala, he’s figuring out the specific needs blind people have using self-driving cars and using his software to solve problems.

“If I’m a visually impaired person and I don’t have the ability to verify visually that I’m at the appropriate location, how do I know that it’s not dropping me off in a field somewhere?” Brinkley said. “In the case of autonomous cars, hopefully, accessibility will be moved to the forefront by some of the research.”

Brinkley doesn’t have access to a self-driving vehicle so instead uses a process developed by Stanford University researchers in a specially configured conventional vehicle. Participants interact with vehicle-control software in what appears to be a self-driving vehicle, and the vehicle’s driver, hidden behind a partition, uses instructions from the software to drive to the right place. Participants don’t know that a human driver is at the controls.

Researchers at the Massachusetts Institute of Technology, Texas A&M University and the US Army Research Laboratory also are working on accessibility issues for driverless vehicles for blind and other people with disabilities.

At Waymo, Google’s self-driving-car company that started nearly a decade ago, officials say visually impaired employees contribute to design and research. While no specific system for blind riders has been completed, the company says it’s developing a mobile app, Braille labels and audio cues.

“Autonomous vehicles aren’t being designed for blind people; we’re one of the beneficiaries of the technology,” the 65-year-old said from his San Jose, California, home. “They’re working on it. I don’t push. They expose me to what they’re working on, and so I’m patiently waiting.”

Autonomous-car industry analysts say the needs of disabled people are being discussed as designers figure out how users will interface with the cars, but there are many competing demands.

“They’re trying to figure out what way to interface with these vehicles for riders, and to build a sense of trust about what the vehicles are doing,” said Sam Abuelsamid, an analyst with Navigant Research in Detroit. “But right now, I don’t know if anyone has all the answers.”

In the meantime, advocates for the blind have turned to Florida’s Brinkley and other researchers to push development forward. Back in Ocala, Cinzhasha Farmer giggled nervously as the Atlas voice spoke to her. The 41-year-old was eager to participate in Brinkley’s study so she can one day drive without relying on others.

“It’s one of my goals, and I don’t know how I’ll ever accomplish it — but that car may do it,” she said with a smile.