PUBG has announced a partnership with bollywood movie Street Dancer 3D, and ahead of Makar Sakranti has also launched an aptly themed game. 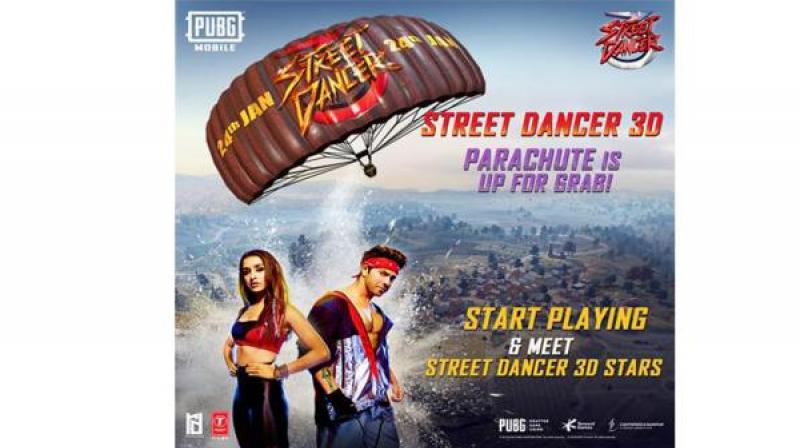 The partnership with a Bollywood movie will be a first for PUBG MOBILE in India.

Tencent Games and PUBG Corporation have announced their partnership with the upcoming Bollywood release Street Dancer 3D, starring Varun Dhawan and also the launch of a special mini game to celebrate the festival of Makar Sankranti. Soon, a special integration of the movie with the game can be seen by the players, who also have a chance to participate in events and secure an opportunity to meet the cast and crew of the movie. Also, staying true to its element of being a user-engaged entertainment platform, PUBG MOBILE has rolled out a limited-edition mini game with a special ‘Kite Event’ for its community.

The partnership with a Bollywood movie will be a first for PUBG MOBILE in India. To this regard, the game would be launching a promotional Street Dancer 3D themed parachute. The players who get this parachute at the start of the game will have a special surprise in store. Lucky players will stand a chance to win a meet and greet with the cast and crew of the movie. Players must register in the game to participate in the contest and an in-game movie-branded zone will display the leader board and rankings of the participants. Among these, the ‘Top 5’ players of the contest will get the opportunity to meet Varun Dhawan and the rest of the stars of Street Dancer 3D.

With PUBG MOBILE Season 11 just around the corner, the limited-edition mini game representing Makar Sankranti, a festival signifying the change in season, is meant to add some festive spirit to the competition. Makar Sankranti is a festival synonymous with kite flying. It is India’s most popular harvest festival. During this period, the players can indulge in a mini game on Erangel, where kites will be placed at the starting point. Each day, three free ‘Kite Tokens’ will be given to the players who can use them to roll a dice. Basis on the number rolled, a kite can be moved along the map to ultimately reach a designated spot to win rewards. Players will also fetch more tokens upon completion of in-game missions.

The Kite Event on PUBG MOBILE will be available only from the 8th of January to 19th of January 2020. The mini game will have three levels, with each containing a fixed number of ‘Kite Tokens’. Players choosing to move their kites faster can do so by spending UC, which allows the dice to be rolled an additional number of times.

PUBG MOBILE has previously partnered with AMC’s The Walking Dead where the brand introduced limited edition in-game items such as character skins, weapons and a vehicle. The new partnership with Bollywood and the introduction of the mini game signifying the popular Indian festival, reiterates PUBG Corporation’s commitment towards its growing Indian gamer community. For Indian players, these new additions enhance the entertainment factor, which supplements the thrill of the game, adding to the popularity of PUBG MOBILE.