Technology   In Other news  14 Aug 2018  Amazon's Cleo Skill to let you teach Indian languages to Alexa
Technology, In Other news 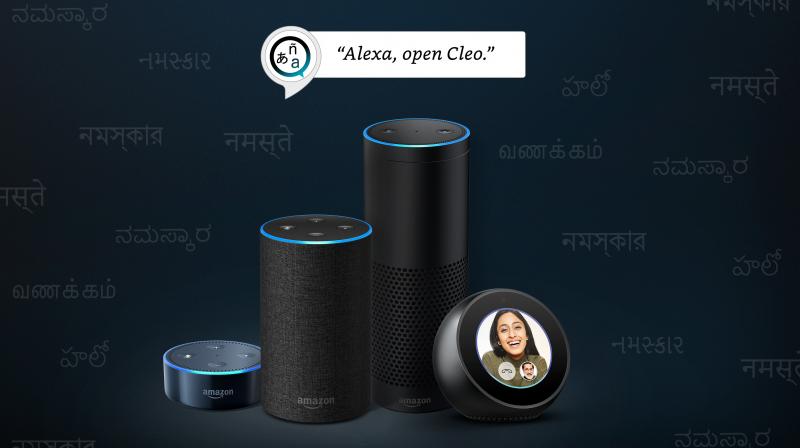 The more they use Cleo, the more it will improve Alexa’s speech recognition and natural language understanding in the long term.

Customers in India can now help Alexa learn Hindi, and other Indian languages, using the new Cleo skill. Developed by Amazon, Cleo provides an opportunity for users to share more about Indian languages and culture with Alexa — by talking to her. Using Cleo, customers can respond to Alexa’s English statements in Hindi, Tamil, Marathi, Kannada, Bengali, Telugu, Gujarati and other Indian languages. The more they use Cleo, the more it will improve Alexa’s speech recognition and natural language understanding in the long term.

The process of creating new languages for Alexa benefits from advances in data availability, computing power, and a subset of artificial intelligence called machine learning, in which systems improve organically as they incorporate more data. Cleo’s availability in India will help improve Alexa’s language model and help her to gradually speak in local languages. Built by a team of linguists and data scientists, Cleo has already helped improve Alexa’s understanding of languages such as French.

Customers can enable Cleo within the “Skills” section of their Alexa app or simply ask their Echo or Alexa-enabled devices to enable Cleo. If a customer prefers to teach Hindi to Alexa, they can open Cleo and be prompted by Alexa in English to respond to her in Hindi. Customers who speak variants of Hindi or any other Indian language and dialect can also use Cleo to improve Alexa’s language capabilities.

1. Say “Alexa, open Cleo.” (Pronounced: KLEE-oh)
2. Alexa will describe how the skill works and ask you for the language you speak. Say the name of your language in English (e.g. “Hindi”, “Marathi”, “Tamil”).
3. Alexa will ask you to confirm the language and will move into the first learning round.
4. During each round, Alexa will ask you to say at least five things in your language. Wait for her to prompt you and then go ahead and respond in the language you specified. She may ask you to say something specific or to just say anything at all. The type of round will differ each time you play.
5. Aim to speak as naturally as possible in your language. It’s better to say something naturally than to translate.
6. To close Cleo during a learning round, just say “Alexa, stop.”
7. Want to see how you stack up against the competition? Just say, “Alexa, ask Cleo how am I doing?” Play Cleo often to earn badges and climb up the ranks!

User: Alexa open Cleo.
Alexa: Welcome back! Would you like to continue teaching me Hindi?
User: Yes.
Alexa: OK, think of a city where they speak Hindi. Ask me for the weather there.
User: Delhi mein Mausam kaisa hai?
Alexa: Ask me for the time.
User: Kitna baj raha hai?
Alexa: Think of your favorite Hindi song. Ask me to play it.
User: Kala chashma sunaoo.
Alexa: Think of an actor. Ask me when they were born.
User: Amitabh Bachchan ka janm kab hua tha?
Alexa: Think of a store where you shop. Ask me when it opens.
User: Mantri Mall kitne baje khulta hai?