Scientist Kumar Loganathan has invented a machine, ‘My Ganga’ that can convert the vapour from the atmosphere into drinkable water. 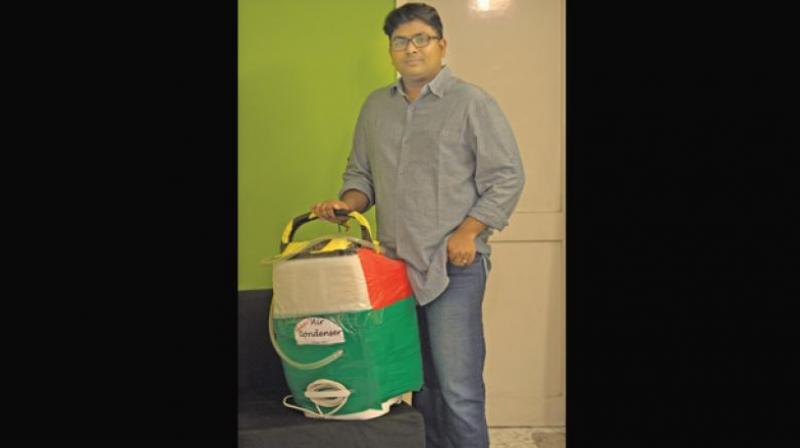 Kumar with his invention

Chennai-based scientist Kumar Loganathan has always been into science and inventions that benefit the mankind. “I love science because there’s logic; there’s fascination. Also when you complete steps with precision, the discovery of doing it right, feels great!” begins the 30-year-old. Having contributed to the society in many ways by inventing things like a machine that can pull kids that fall mistakenly into borewell holes, a prosthetic device that won a science award from Kapil Sibal, mosquito repellents that don’t damage the respiratory system and more, he has a new product, yet to be patented. His latest invention that converts the vapour into water is called My Ganga.

Elaborating more about the objective and its working, Kumar shares, “Atmosphere is one of the biggest sources of water and we tend to make very less use of it. Water is a natural resource and everyone has equal access to it, but with the increase in population, many places are in drought. We need to consume lesser groundwater. When I was researching about animals, I found that a particular type of beetle in Africa holds air and when the air touches the body, it condenses to form water. The same due point principle is used in my invention. I analysed the shape and functioning of the beetle and that’s when I perceived the idea for My Ganga.”

Talking about how My Ganga is different from other vapour converters, Kumar says, “Most converters use coolants and function like an air conditioner or a refrigerator, also producing heat. My Ganga has no coolant and runs with minimal electricity — which is less than 100 W (which is almost as much as what an electric fan needs) and leaves no carbon footprint thereby not harming the environment. It also works with solar panels and eliminates the need for electricity too!”

When asked how the water becomes drinkable after being converted from a polluted air, Kumar responds in ease to that as well. “The vapour condenses and goes through four filters to give a 7.2 pH, drinkable water. It’s tested and safe,” he says. The machine can produce upto 25 litres of water per day from just air and it can be used by both industries and households. “Since the humidity changes from place to place, the machine does not work in highly dry places like the Saharan dessert. For a city like Chennai, the machine is suitable for every household,” he adds. The higher the relative humidity, the more is the water produced per hour.

The product is to hit the market soon and the creator talks about why the name is very important — “Ganga is one of the biggest rivers. We are the people, who are making artificial changes to the natural flow of a river. I want my machine to give water for all and solve the water crisis.”