Underwater fibre-optic cables: How are they repaired

When an undersea submarine fibre-optic cable is damaged, it needs to be repaired with top priority. 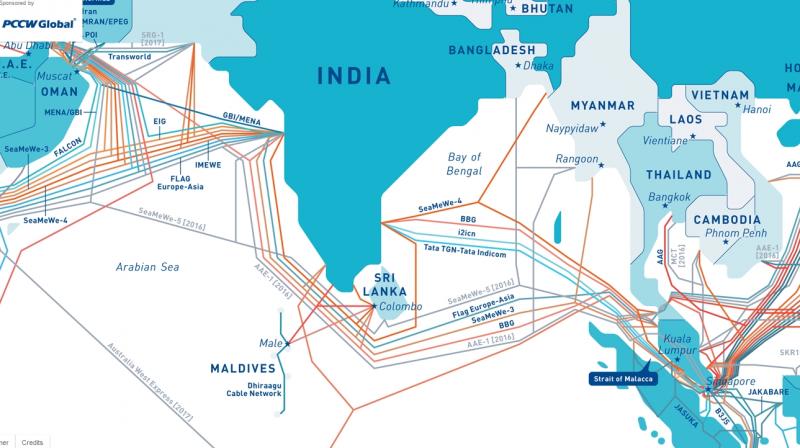 Majority of the internet flows through undersea cables and very little passes through satellites.

Most parts of India were badly affected by an internet blackout a few days ago. The reason — south-east coast of India, especially Tamil Nadu and Andhra Pradesh, was badly hit by cyclone Vardah. Chennai is one of the major landing points for India’s undersea internet telecommunication links, and the cyclone was responsible for major damage one of the undersea submarine cables.

Majority of the internet flows through undersea cables and very little passes through satellites. India receives its data connection from three major landing points, namely Mumbai, Tamil Nadu and Kerala. Internet data reaches India through a network of undersea submarine fibre-optic cables owned by telecomm giants such as Singtel, Etisalat, France Telecomm and China Telecomm. The cables run across thousands of miles across the floor of the seabed, connecting different nations to the internet circuit.

When an undersea submarine fibre-optic cable is damaged, it needs to be repaired with top priority as many nations depend on internet networks for data communication. Damaged by earthquakes, ship anchors and fishing trawls, undersea cables often need repairs and maintenance.

Repairing a cable is similar to repairing a punctured tire where the bad rubber is replaced with a new patch. When a fibre-optic cable breaks in mid sea, it is impossible to see the fault directly. Hence, when such incidents take place, the telecom operator has to locate the accident and replace the damaged stretch with a fresh new cable.

First, the telecom operator locates the damaged area by zeroing in on the problematic part. To do this, they send signal pulses through the cable from one end or base station. The damaged area (break) will bounce back the pulse to the signalling site which sent the data. Calculating the time delay from the reflected signal, engineers can zero in on the exact point and area of the problem. Then they send out a large cable repair ship, with fresh optic cables to replace the defective part under the sea. The cable is then lifted from the sea bed using special hooks (grapnel) and dragged onto the ship. The faulty cables are then spliced onboard, joined with a fresh cable, sealed with a watertight and anticorrosive covering and returned back to the seabed. Then the ship sends out the information to the base stations to test the cable again. Once the test signals are reaching the destination, the work is confirmed and the cable is repaired successfully. The data is then switched on and the connection restored. The entire process can take up to 16 hours or more, depending the number of cable breaks, successful repairs, time of day, weather conditions at sea and ships around the area.

Check out the video below which shows how engineers patch a fibre-optic cable: