Technology   In Other news  17 May 2020  Keep your background neutral! Canada Speaker lays down rules for MPs as they Zoom Parliament sessions
Technology, In Other news

Keep your background neutral! Canada Speaker lays down rules for MPs as they Zoom Parliament sessions

Every Tuesday and Thursday over the past month 338 Canadian MPs logged into Zoom from home. 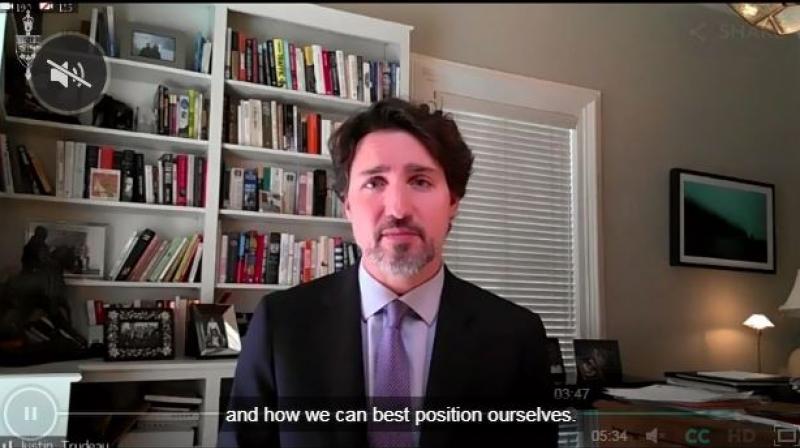 A screenshot of Prime Minister Justin Trudeau at a Parliament session being held over Zoom. Trudeau went for the typical bookcase background, while another MP streamed in front of a white bedsheet meant to hide home renovations, which was described as looking like a “hostage video situation”, and Industry Minister Navdeep Bains, a devout Sikh, won praise from viewers for using a painting of colorful turbans as a backdrop.

Ottawa: Canada’s parliament has gone virtual through the pandemic, assembling MPs across six time zones and giving a rare peek at Prime Minister Justin Trudeau’s bookcase, a deer head and a stifled opposition.

Every Tuesday and Thursday over the past month 338 Canadian MPs logged into Zoom from home to question ministers in lieu of holding a daily in-person question period.

The first sessions were marred by glitches—“Can you hear me now?” “There’s an issue with the translation.” “The minister is being cut off.” “Please unclick your mute.” “You might also hear my son, he doesn’t sound too happy, in the background.”

“This is a historic day,” Speaker Anthony Rota said when it began, while admonishing MPs over sounds of camera clicks “not to post photos on the Internet of the screen,” as per parliamentary rules.

A few others including the British and Latvian parliaments have also gone online to limit person-to-person spreading of the COVID-19 virus.

“We cannot be vectors for the virus,” New Democrat MP Peter Julien told AFP, explaining why his party pushed for this arrangement to maintain democracy in a crisis.

“The only way to ask questions on behalf of constituents and hold government accountable without endangering the public is a virtual parliament,” he said.

Critics such as Democracy Watch co-founder Duff Conacher lamented that it has diminished the role of the official opposition, while the minority Liberal government of Trudeau uses daily press briefings to discuss policy.

“It’s very difficult in these mass virtual sessions to put a minister or the prime minister on the spot,” Conacher said, describing the sessions as “chaotic.”

He also warned of the risk of abuse if parliamentary oversight is curtailed.

The official opposition Tories had from the start objected to the virtual confabs.

“Mr. Trudeau should not be using a pandemic to avoid accountability and oversight and should not be eliminating the role of the peoples’ representatives,” leader Andrew Scheer said Friday.

But the prime minister, with the backing of New Democrats and the Bloc Quebecois, had said it would be irresponsible to have regular sittings while public health officials urged social distancing.

No legislation except emergency spending bills have been passed during the nationwide lockdown. A ban on assault weapons was enacted by executive order after a mass shooting in Nova Scotia.

And the government has racked up Can$325 billion (US$230 billion) in pandemic aid.

Working from home in a suburb of balmy Vancouver, Julien doesn’t miss Ottawa, which had flurries this week.

But his days are longer as he deals with a surge in constituents’ concerns such as job losses, and challenges of politicking by phone across 5,500 kilometers (3,400 miles) from coast to coast.

“When people are scattered across the world’s largest democracy (geographically) it takes longer to actually get people on the phone,” he said, versus walking down the hall to MPs’ offices in Ottawa “for a quick face-to-face meeting.”

Now, an MP in Newfoundland might start work at 8:30 am local time, when it’s 4 am in British Columbia.

A committee report released on Friday called for setting up a “secure electronic voting system” for the virtual parliament to fully function.

It noted that Zoom also did not provide sufficient security for in-camera meetings.

Dozens of rural and northern MPs have also been unable to connect due to poor Internet.

Interpreters who translate English into French and vice versa, meanwhile, reported a steep increase in workplace injuries including acute acoustic shock and tinnitus.

Rota urged MPs to “please speak at a reasonable pace” for their sake.

The speaker also chided MPs over their choice of backdrops, which should be neutral, he wrote in a letter the House affairs committee, to “ensure that what is debated and decided upon in the House remains more important than what is seen.”

A deer head, for example, was mounted on a wall behind an MP criticizing the government’s new gun control measures.

Another MP streamed in front of a white bedsheet, described as looking like a “hostage video situation.” It was meant to hide home renovations.

Industry Minister Navdeep Bains, a devout Sikh, actually won praise from viewers for using a painting of colorful turbans as a backdrop.

Others noted what books were on the prime minister’s shelf.

This “peak inside of MPs’ homes,” said Julien, has “allowed Canadians to learn a bit about their personalities, it’s humanizing.”

Another upside: no heckling online, although one MP accused Rota of being “a little dictatorial” for threatening to mute MPs who interrupted.

In the coming days, parties will need to agree to extend the virtual parliament beyond May 25.

Some said regular sessions likely won’t resume until next year.

Microsoft Office 2021 consumer release to come out in October