WhatsApp to bring something more than emojis

Although WhatsApp didn't introduce it yet, many other messengers offer it.

With the WhatsApp Beta version 2.18.218, the popular messenger will introduce the preview of the upcoming stickers.

When words cannot explain the emotions in their best form, emojis are always there at our service. Almost every feeling can be explained through emojis. However, when the feeling is intense, and emojis don't justify the moment, stickers come across as a better option, for many. And, that's what WhatsApp is set to bring us in the near future.

With the WhatsApp Beta version 2.18.218, the popular messenger will introduce the preview of the upcoming stickers. As per the tweet updated on WABetaInfo, the stickers will be available in two packs namely Bibimbap Friends and Unchi and Rolli which will perhaps offer animation in two different types. 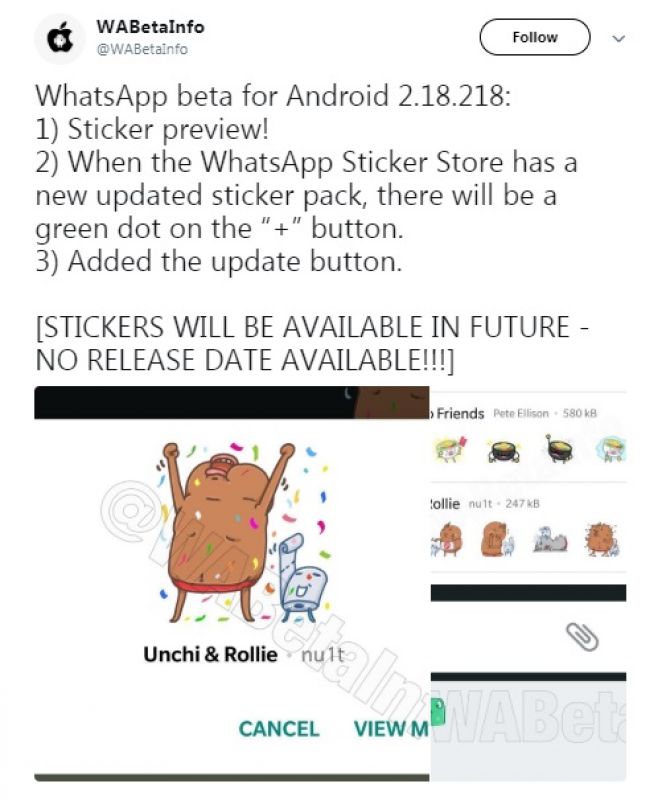 The Beta version has not released yet and the time it will come is still unknown. The feature in question will possibly be followed on the public version as well later. Moreover, it is also expected that the stickers may largely resemble those in Facebook as both the platforms work concertedly.

Although WhatsApp didn't introduce it yet, many other messengers offer the feature of sending stickers. Currently, you can see them on platforms such as Skype, WeChat, Line, Allo and Facebook Messenger. Looking at the adaptability of WhatsApp, the induction of stickers should add more elements and fun to the messenger.