Technology   In Other news  18 Apr 2020  Fake news being spread in US by conspiracy theorists claiming COVID-19 is a hoax
Technology, In Other news 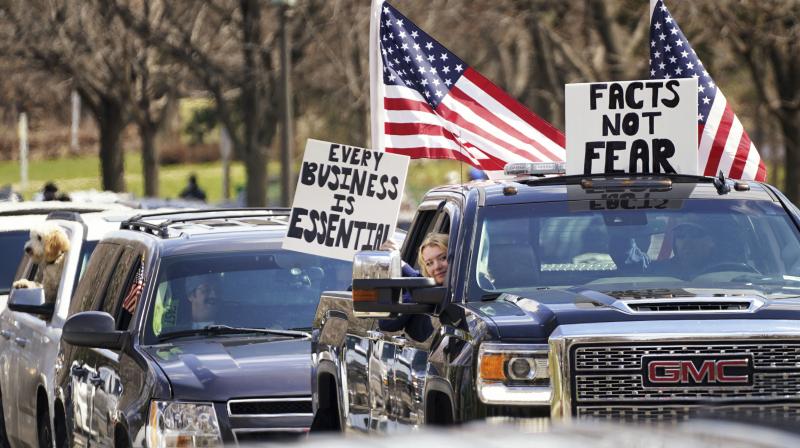 New York: The video lasts just 13 seconds and shows nothing more than the view from a car quietly driving past a hospital entrance. But the person who posted it on Twitter used the footage to sarcastically question reports of “apocalyptic conditions” at Mount Sinai Queens in New York City.

That video and dozens of others like it have been spreading on social media through the #FilmYourHospital hashtag. The people taking and posting videos of quiet scenes outside hospitals are promoting a right-wing conspiracy theory that fear-mongering media outlets and Democrats are intentionally exaggerating COVID-19's deadly toll. The clip from Queens racked up more than 227,000 views in less than three weeks.

“It's very sad because I'm working with a team of thousands of people who are putting their lives at risk. They are struggling every day to provide the best care they can in horrendous conditions,” said Dr. David Reich, president of Mount Sinai Queens and Mount Sinai Hospital in Manhattan. The Mount Sinai system has treated thousands of coronavirus patients.

Hospitals aren't the only targets of the far-right fringe during the pandemic. The coronavirus has breathed fresh life into old conspiracy theories and inspired a mishmash of new ones, with a cast of villains that includes Bill Gates, 5G wireless technology, the United Nations and President Donald Trump's political foes.

New York is also the setting for one of the wildest virus-related conspiracy theories circulating on social media _ that the pandemic is masking a military operation to rescue thousands of deformed “mole children” from the clutches of sex traffickers in underground tunnels beneath medical tents recently erected in Central Park.

Many of the social media accounts driving that baseless story and the #FilmYourHospital campaign belong to followers of “QAnon,” a far-right, apocalyptic conspiracy theory that believes Trump is waging a secret campaign against “deep state” enemies and Satan-worshiping Democrats who prey on children. The Twitter user who posted the March 29 video of Mount Sinai Queens has a profile that includes the QAnon slogan “WWG1WGA,” which stands for “Where we go one, we go all.”

Alex Friedfeld, an investigative researcher for the Anti-Defamation League's Center on Extremism, said quarantine conditions are ripe for conspiracy theories to mutate and quickly spread. The purveyors are scared and cooped up inside their homes with abundant free time to spend on the internet.

“We are in a time of crisis, so people are frightened,” he said. “They are looking for explanations. Conspiracy theories can be comforting because they basically place order on chaos. A lot of them give you somebody to blame, and that can be comforting to people at an uncertain time.”

Friedfeld said the virus has become fodder for old tropes like “Agenda 21,” a conspiracy theory that a network of global elites are using a United Nations resolution adopted in 1992 to control citizens and depopulate the earth.

Other new conspiracy theories being fueled by the virus include one that claims maps show a link between 5G networks and coronavirus outbreaks. Another holds that Microsoft co-founder Bill Gates intends to use a COVID-19 vaccine to track and control the world's population. Fox News host Laura Ingraham amplified the narrative with an April 7 tweet that said, “Digitally tracking Americans' every move has been a dream of the globalists for years.”

U.N. Secretary-General Antonio Guterres warned Tuesday that COVID-19 misinformation is a poisonous threat to the world and urged social media organizations to do more to counter it. Social media platforms say they are trying to stop the spread of coronavirus hoaxes and connect users with reliable information.

Facebook is removing content related to the “#FilmYourHospital” hashtag when it violates the social network's policies, according to company spokesman Andy Stone. The company says it removes coronavirus-related misinformation from Facebook and Instagram that could contribute to “imminent physical harm.”

Twitter says it is removing COVID-19 content “when it has a call to action that could potentially cause harm.” One of the first and most popular tweets promoting #FilmYourHospital remains on the platform. DeAnna Lorraine, a California Republican who unsuccessfully challenged House Speaker Nancy Pelosi, posted a video taken outside a Los Angeles-area hospital and urged her followers to get the hashtag trending. The video she tweeted on March 29 has 1.4 million views.

A copycat video posted on Twitter showed an empty parking lot and vacant tents outside University Medical Center Tucson in Arizona. “We should be picketing in protest of this hoax!” the user tweeted.

A hospital official said the exterior appears quiet because the medical center is not allowing visitors, has furloughed nonessential employees, canceled elective procedures and stopped using the tents to test outpatients with mild virus symptoms. Dr. Christian Bime, medical director of the intensive care unit at the Tucson hospital, said he has treated approximately 20 COVID-19 patients, some of whom have died.

“This is not a hoax. This is real. These are real patients who have real families,” Bime said.

A Mount Sinai spokeswoman says the lobby inside its Queen hospital appeared empty in the video because it also barred visitors. Another Twitter user posted a copycat video outside Mount Sinai's Manhattan hospital, which normally has about 970 patients but had approximately 1,250 on Wednesday. Around 700 were COVID-19 patients, including roughly 150 on ventilators, according to Reich. He called it “the worst crisis of our lifetimes.”

“There is so much obvious evidence that this is real. It almost defies imagination that anybody would have to try to prove it,” Reich said.