Technology   In Other news  19 Sep 2020  China retaliates for US' TikTok, WeChat ban with new provision to sanction foreign companies
Technology, In Other news

Punitive measures may include fines against the foreign entity, banning it from conducting trade and investment in China. 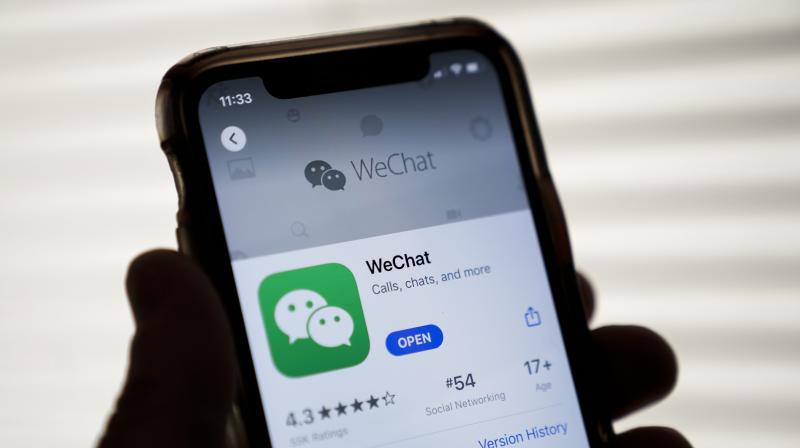 An announcement by China’s Ministry of Commerce that came after US's decision to ban WeChat and TikTok did not mention any specific foreign entities that could be targeted. But it said the new system would consider sanctions on entities whose activities “harm China’s national sovereignty, security, and development interests” or violate “internationally accepted economic and trade rules”. (Photo | AFP)

Shanghai: China on Saturday launched a mechanism that would allow it to sanction foreign companies, upping the ante in a tech war with the United States a day after Washington moved to curb popular Chinese apps TikTok and WeChat.

China’s long-expected “unreliable entities list” is seen as a weapon for Beijing to retaliate against the United States, which has used its own “entity list” to shut Chinese telecom giant Huawei out of the US market, while also moving against TikTok and WeChat.

Its implementation comes just a day after the US Commerce Department stepped up the pressure by ordering a ban on downloads of video app TikTok and effectively blocking use of WeChat, the Chinese super-app.

An announcement by China’s Ministry of Commerce did not mention any specific foreign entities that could be targeted.

But it said the new system would consider sanctions on entities whose activities “harm China’s national sovereignty, security, and development interests” or violate “internationally accepted economic and trade rules”.

That language closely tracks wording that Beijing has used to repeatedly denounce US actions against Chinese companies.

Punitive measures may include fines against the foreign entity, banning it from conducting trade and investment in China, and restrictions on the entry of personnel or equipment into the country.

It covers “foreign enterprises, other organisations and individuals”, the ministry said.

Under Friday’s US order against the Chinese apps, Tencent-owned WeChat would lose functionality in the United States from Sunday. TikTok users will be banned from installing updates but could keep accessing the service through November 12.

That timeframe potentially allows for a tie-up between TikTok, owned by China’s ByteDance, and a US company to safeguard data for the wildly popular app to allay Washington’s security concerns.

With President Donald Trump facing a tough re-election campaign, US officials have described the measures as essential to safeguard national security from potential Chinese espionage through the platforms.

But in a response to the US steps, China’s Commerce Ministry on Saturday condemned what it called US “bullying”, saying it violated international trade norms and that there was no evidence of any security threat.

“If the US insists on going its own way, China will take necessary measures to resolutely safeguard the legitimate rights and interests of Chinese companies,” it said, without specifying the potential measures.

A short time after that statement, the ministry announced the new sanctions regime.

TikTok vowed to fight the Trump crackdown in court, saying it impedes a tool “for entertainment, self-expression and connection.”

Critics said that while the security risks were unclear, the sweeping ban raises concerns about the US government’s ability to regulate free expression.

“It’s a mistake to think of this as (only) a sanction on TikTok and WeChat. It’s a serious restriction on the First Amendment rights of US citizens and residents,” said Jameel Jaffer, director of the Knight First Amendment Institute at Columbia University.

Some analysts say Trump’s moves are motivated more by reasons for business competition than security concerns.

The moves would effectively disable US use of WeChat—a so-called super-app used for messaging, shopping, payments and other services—and TikTok from the online marketplaces operated by Apple and Google.

After Sunday, services on WeChat will be “degraded”, said a senior US Commerce Department official, who added that existing users may retain some capability.

WeChat is widely used among Chinese expats to keep in touch with people back home. A court challenge to the ban by US-based WeChat users is pending.

The US ban on WeChat does not affect its service in China where the app is much more widely used.

Pressure grows for a deal

Existing TikTok users will be able to continue using the app until November 12 — when it would also face a full ban on its US operations if no deal is reached, according to officials.

TikTok’s brand of brief, quirky phone videos has become hugely popular, especially among young people, with 100 million users in the US alone.

The move ramps up pressure on ByteDance to conclude a deal to sell all or part of TikTok to allay US security concerns.

A potential deal would allow Silicon Valley giant Oracle to become the tech partner for TikTok, but some US lawmakers have objected to allowing ByteDance to keep a stake.

“For ByteDance, their back is against the wall to accept the terms of the deals outlined over the past few days,” Daniel Ives at Wedbush Securities said in a research note.

“We still believe a deal can be reached and this shutdown averted although it’s a critical 48 hours ahead for deal negotiations between all parties involved.”