The new MP-CD1 is small and is capable to project content up to 304.8cm in size from a distance of 350cm. 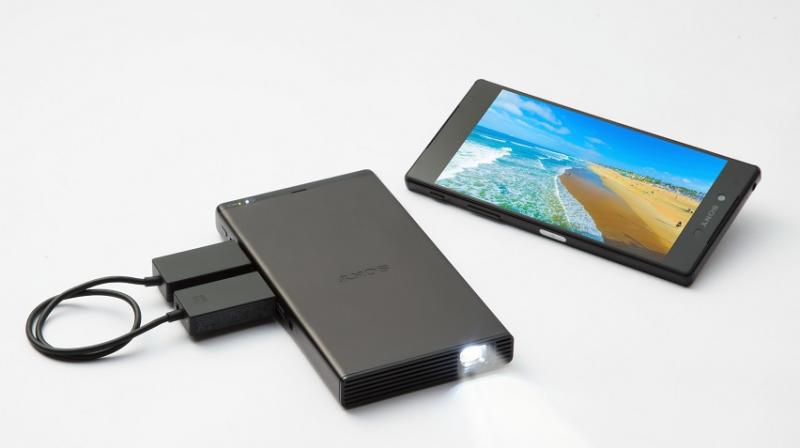 This projector weighs 280.6 grams and can transform a surface into a wide screen.

Sony introduced the ultra-portable MP-CD1 Mobile Projector. The new MP-CD1 is small and is capable to project content up to 304.8cm in size from a distance of 350cm. This projector weighs 280.6 grams and can transform a surface into a wide screen.

The MP-CD1, as Sony says, enhances brightness levels to reduce motion blurring and noise and ensures optimum performance. It is equipped with Texas Instruments’ DLP IntelliBright technology that manages brightness and power consumption. With a rating of 105 ANSI lumens, the projector’s display employs advanced image processing algorithms for better performance during any business presentation, gaming, outdoor events and movies.

The MP-CD1 has been claimed to boast a compact design, which allows it to minimize heat while still maintaining high brightness in a pocket-sized form factor. The ultra-mobile projector has a 5,000mAh built-in battery for users to project images with up to two hours of projection time.

To ensure a full-screen display without distortion the projector features the Automatic keystone correction technology. It also comes with a standard tripod socket, located on the underside of the device to facilitate projection at any angle, such as ceilings. The projector is cooled by an in-built fan that is almost noiseless even while projecting a movie.

The HDMI and USB ports on the MP-CD1 accept a variety of media-streaming devices, smartphones, laptops and gaming consoles. The device also sports an optional HDMI dongle that enables wireless connectivity with other devices or for watching streaming content from various video sources. The HDMI dongle also supports simultaneous powering from a USB port even during projection.

MP-CD1 will be available across all Sony Centers, Sony authorized dealers and major electronic stores across India at Rs 29,990.