The companies that supplied self-driving technologies could potentially be held liable if litigation ensued from the Tempe accident. 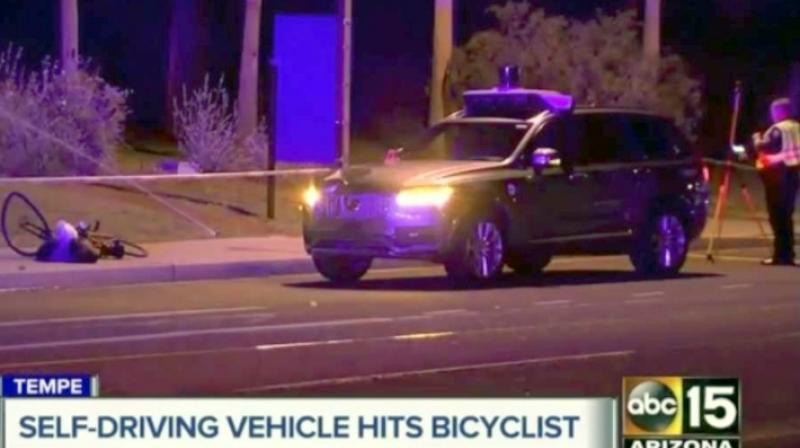 Uber said it was suspending North American tests of its self-driving vehicles, which are currently going on in Arizona, Pittsburgh and Toronto. (Photo/San Francisco Chronicle)

The death of a pedestrian hit by a self-driving Uber vehicle in Arizona this week could offer a test of who can be held legally responsible for accidents when a human is no longer at the wheel, legal experts said.

Any litigation that arises from the accident, the first fatality involving a fully autonomous vehicle, could pit the ride-hailing service against technology suppliers and the vehicle’s manufacturer, legal experts said. It could also provide a window into confidential indemnification agreements that companies developing self-driving car systems may have reached to shield themselves legally.

In Sunday’s accident, Elaine Herzberg, 49, was walking her bicycle outside the crosswalk on a four-lane road in the Phoenix suburb of Tempe when she was hit by the Volvo XC90 SUV, which was travelling in autonomous mode at about 40 miles per hour, police said.

Tempe Police Chief Sylvia Moir, who saw the video of the crash, told the San Francisco Chronicle that it “would have been difficult to avoid this collision in any kind of mode (autonomous or human-driven) based on how she came from the shadows right into the roadway.”

The Tempe Police Department said in a statement later that the department does not determine fault in vehicle collisions. “Ultimately the investigation will be submitted to the Maricopa County Attorney’s Office for review and any potential charges,” it said. It was not clear whether a lawsuit would be filed on behalf of Herzberg’s estate.

Bryant Walker Smith, a law professor at the University of South Carolina with expertise in self-driving cars, said most states, including Arizona, require drivers to exercise due care to avoid hitting pedestrians on a roadway, even if the pedestrians use an unmarked crosswalk.

Sergei Lemberg, a California-based lawyer who has brought several lawsuits against self-driving car manufacturers, said that Uber, Volvo, which manufactured the sports utility vehicle, and any companies that supplied self-driving technology could potentially be held liable if litigation ensued from the Tempe accident. The “safety” driver who was behind the wheel but who appears not to have operated the vehicle could also be named as a defendant, Lemberg said. “Suing all these parties would be my top thought right now,” he said. Uber said in a statement it was fully cooperating with local authorities investigating the accident.

Volvo, the Swedish car brand owned by China’s Geely, confirmed its vehicle was involved in the crash but said the software controlling the SUV was not its own. Volvo said in 2015 it would accept full liability when one of its vehicles equipped with its own self-driving system was in the autonomous mode. The company said in 2017 it had agreed to supply Uber with 24,000 self-driving vehicles.

Until now, most litigation over non-fatal accidents involving self-driving vehicles has been confidentially settled, according to legal experts. A case in which a motorcyclist sued General Motors (GM.N) after a collision last year with one of the company’s autonomous test cars in San Francisco is pending.

GM has said in a statement regarding the lawsuit that in its collision report the San Francisco Police Department determined that the autonomous vehicle was not at fault in the accident.

Legal experts said liability in the Tempe case would depend on the facts of the accident and the results of US National Highway Safety Administration and National Transportation Safety Board investigations.

WITH NO DRIVER, SPOTLIGHT ON DESIGN

Car accident litigation usually turns on whether a driver acted negligently, or failed to exercise a reasonable level of care. By contrast, a lawsuit involving an autonomous vehicle could revolve around whether the self-driving system had a design defect, legal experts said.

Design defect claims do not require a finding of fault or negligence. To prevail, a plaintiff must show only that a product had an inherent design defect that would render it unsafe.

Automakers and software writers could counter with detailed data gathered by on-board sensors on how cars behaved during a collision, experts said, to show that it was impossible for the vehicle to avoid a collision and that all the systems functioned properly.

One question that would likely arise in litigation is whether Uber, Volvo or any companies that supplied self-driving technology entered into indemnification agreements, in which an entity assumes another company’s liability costs.

Paul Rafferty, a California-based lawyer who represents carmakers, said such agreements in the autonomous vehicle world are confidential and disputes over indemnification are generally arbitrated or mediated behind closed doors. Volvo declined to comment on whether it had entered into indemnification agreements with Uber.

So if any litigation in the Arizona accident alleges design defect claims, it could set legal precedent and be “very impactful” on the nascent autonomous vehicle industry, she said.

Regardless of who is at fault, the University of South Carolina’s Smith said he would expect Uber, which has faced past scrutiny over its business practices, to settle any litigation quickly to avoid the public spotlight. “Only if Uber believes that it was wholly without fault could I see this case going to trial,” he said.