An official said a draft legislation would make social media companies accountable in Turkey legally and for tax purposes. 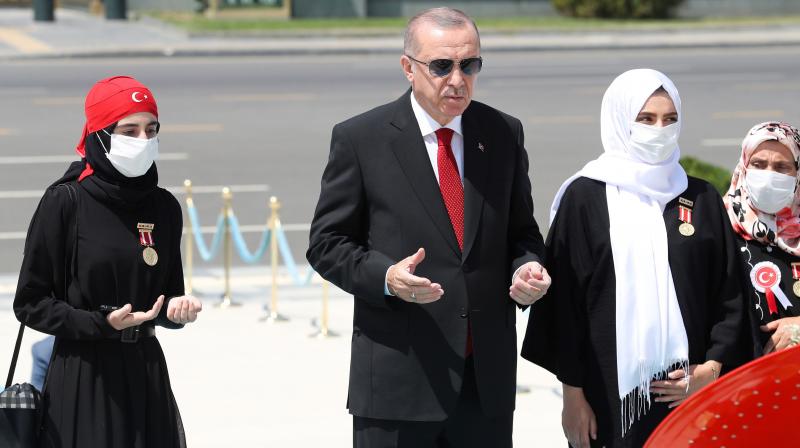 President Recep Tayyip Erdogan, who has greatly concentrated powers into his own hands during 17 years in office, vowed this month to bring social media platforms under control following a series of tweets that allegedly insulted his daughter and son-in-law. (Photo | AP)

Ankara: The Turkish president’s ruling party is submitting draft legislation to parliament that would enable the government to tighten its grip on social media, an official said Tuesday. The opposition fears the legislation will lead to greater censorship in the country.

President Recep Tayyip Erdogan, who has greatly concentrated powers into his own hands during 17 years in office, vowed this month to bring social media platforms under control following a series of tweets that allegedly insulted his daughter and son-in-law after they announced the birth of their fourth child on Twitter. At least 11 people were detained for questioning over the tweets.

The nine-article draft legislation would force social media companies with more than 1 million daily users in Turkey _ such as Twitter, Facebook and YouTube _ to establish a formal presence or assign a representative in Turkey who would be accountable to Turkish authorities legally and for tax purposes.

A social media company or its representative would also be required to respond within 48 hours to complaints about posts that violate personal and privacy rights.

The social media giants would be obliged to assign a representative within 30 days after the legislation comes into force, or face gradually increasing fines and bandwidth reductions of up to 90%, ruling party legislator Ozlem Zengin told reporters.

“We aim to put an end to insults, swearing, to harassment made through social media,” Zengin said, adding that the measures sought to “balance freedoms with rights and laws.”

“Our priority is not to close down the social media providers. We are aware of the importance in our lives,” she said.

Opposition parties, however, have expressed concerns that the government’s plans are aimed at further limiting the Turkish public’s ability to access social media and reach independent news and information in an environment dominated by pro-government media.

Thousands of websites already remain blocked in Turkey. In January, the government lifted a more than two-year ban on Wikipedia after Turkey’s top court declared it unconstitutional. Turkey halted access to the online encyclopedia after it refused to remove content the government deemed offensive. The Turkish government has also banned YouTube and Twitter in the past.

Meanwhile, at least 76 journalists and other media workers remain behind bars, according to The Journalists’ Union of Turkey. The Committee to Protect Journalists has labeled Turkey one of the world’s top jailers of journalists.

The draft bill is scheduled to be debated in the general assembly next week, Zengin added.

The legislation is expected to pass with the votes of the ruling party and its nationalist allies.

This story has been updated to correct the day of the week in the summary and lead to Tuesday instead of Friday.