The game is well worth it for its asking price of Rs 1,499 which includes the special headset and controller. 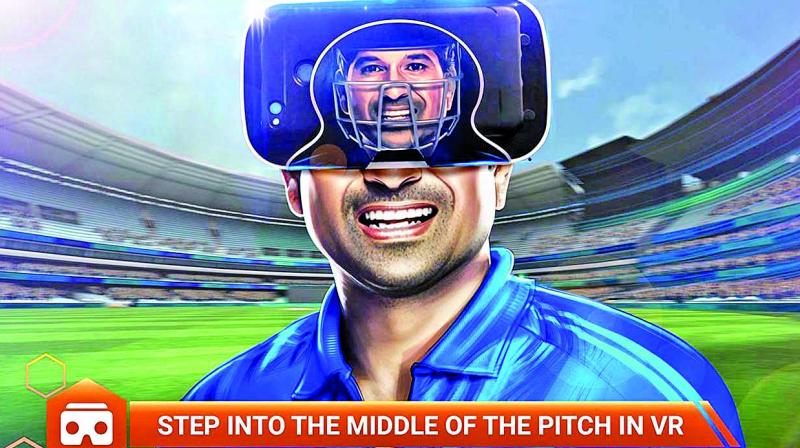 Learning the responsiveness is tricky but once you understand how to time the shots it becomes much easier.

Mobile games have been growing at an unprecedented rate for a while now, and even though everyone seems to be talking only about PUBG Mobile; they often forget the part cricket games play in the industry. Sachin Saga has been quite a hit among Indian audiences for obvious reasons, but their latest addition takes everyone out of their comfort zone for something different, Sachin Saga VR; possibly the first multiplayer VR Cricket game.

The setup is simple. Scan the qr code on the special edition headset to download the app. Connect the bluetooth controller to your phone, attach the phone to the headset and you are ready to go.

Learning the responsiveness is tricky but once you understand how to time the shots it becomes much easier. The game definitely needs a tutorial which helps you with the various shots available and how to perform them.

The controller is fully functional with face buttons that let you bring up menus, change the volume and so on. There is also an analog stick with a trigger button which allows you to aim your shots.

You can flick the stick up to run, but its not well made as more often than not you are shooting in the same upward direction, forcing the players to make a run.

The game looks surprisingly good in VR. The presentation of the pitch and the stadium definitely adds to the atmosphere which is what the game hoped to bring to life with the addition to VR. The commentary on the other hand like most sports games is woeful and can get extremely repetitive. Numerous times I heard the same lines in the same over.

As far as teams are concerned, In quick play you can select the countries, overs between 2, 5 and 10 as well as time of day and difficulty. In the main gameplay mode, you go through specific matches with certain objectives. Upon completing, you unlock the next match.

While it needs some adjustments and additions, Sachin Saga VR is well worth it for its asking price of Rs 1,499 which includes the special headset and controller. Just make sure you have a good enough phone, as low end phones might just struggle.