Technology   In Other news  22 Mar 2018  Watch: Shocking footage of self-driving Uber knocking down woman
Technology, In Other news

Uber is said to be suspending all of its autonomous testings after the incident. 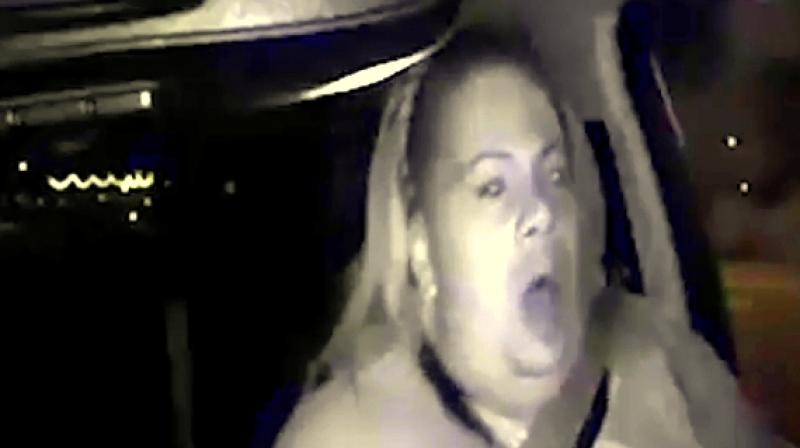 On Wednesday, March 21, the police released the dash cam video from the car which shows the human driver take her eyes off the road for a few seconds.

A few days ago, Uber was in the news for one of its self driving cars involved in an accident. The car knocked down a pedestrian crossing the street in Arizona. The woman who was mowed down was died in the hospital later.

An Uber self-driving car hit and killed a woman crossing the street in Arizona, police said on March 19, marking the first fatality involving an autonomous vehicle and a potential blow to the technology expected to transform transportation. The ride services company said it was suspending North American tests of its self-driving vehicles, which are currently going on in Arizona, Pittsburgh and Toronto.

“This tragic accident underscores why we need to be exceptionally cautious when testing and deploying autonomous vehicle technologies on public roads,” said Democratic Senator Edward Markey, a member of the transportation committee, in a statement.

Elaine Herzberg, 49, was walking her bicycle outside the crosswalk on a four-lane road in the Phoenix suburb of Tempe about 10 p.m. MST Sunday when she was struck by the Uber vehicle traveling at about 40 miles per hour (65 km per hour), police said. The Volvo XC90 SUV was in autonomous mode with an operator behind the wheel.

Herzberg later died from her injuries in a hospital, police said.

On Wednesday, March 21, the police released the dash cam video from the car which shows the human driver take her eyes off the road for a few seconds. The video also shows that the woman suddenly appeared out of nowhere.

Cameras are not as efficient as human eyes and hence the woman could not be spotted in time. However, the self-driving cars are supposed to also work with radars that are meant to spot obstacles and humans on the road in dark environments.

The released video shows the front view as well as the car’s interior view. The human driver in the video is seen distracted by something under the dashboard — probably a smartphone. The human driver was distracted for a few seconds just before the incident took place, giving absolutely no room for braking in time. The human woman driver behind the wheel is identified as 44-year-old Rafael Vasquez. As seen in the video, Vasquez was shocked and surprised as the car hits the woman.

Another shocking revelation shows that the self-driving Uber car, a Volvo XC90, was in autonomous mode and was travelling around 40mph in a 35mph zone.

AS for a few reports online, Uber is said to be suspending all of its autonomous testings after the self-driving car struck and killed a pedestrian Arizona.