Google makes it sure that you will do something after watching a cute fox showing its efforts to save planet earth. 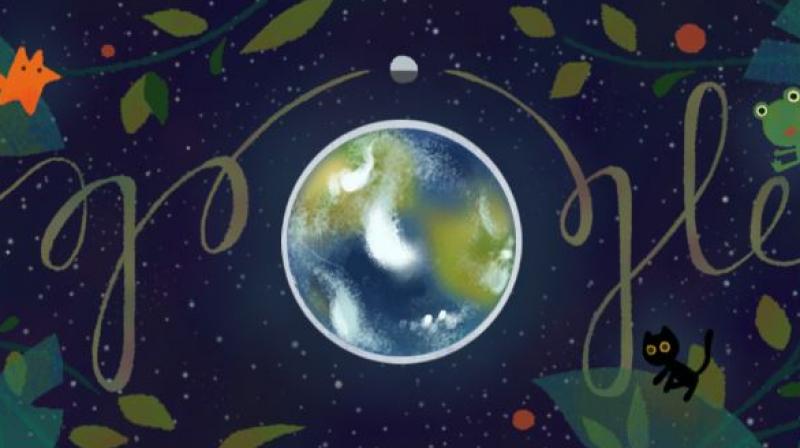 Google’s doodle for the Earth Day takes an emotional and cute approach to the issue of making our planet breathe.

Conservation of the ecosystem around us has been a topic that is discussed as a regular topic for debates around the world but seldom being acted upon. Yes, you will often see school kids and white-collar corporate planting sapling in their campus or some roadside parks. However, you will see them driving in their own cars or wasting water the very next moment. Google though has decided to make everyone around the world, who open their computers on the occasion of Earth day, take notice of this grave issue of ignorance towards eco-saving measures.

Google’s doodle for the Earth Day takes an emotional and cute approach to the issue of making our planet breathe. The doodle depicts a fox having a dream that turns out to be a nightmare.

In its dream, the fox sees a dying coral reef with dead fishes floating around. It also sees melting icebergs that are endangering the penguin species. These major eco- horrors startle our little fox who now plans to act on the issue in its own little ways that could make a little difference.

So, it rushes out to plant saplings around his place that was barren. In order to balance the ecosystem, he prefers to avoid meat products and go for vegetables and fruits. It doesn’t want to take part in contributing to the enormous carbon emissions from traditional transportation methods, which makes it cycle to his workplace and even bicycle-pool with its friends (made us laugh a lot).

The fox and its friends also prefer to keep up their daily appliances, like lights and mobile phones, run on sustainable free sources of energy like hydro and wind power. They also make sure that they conserve these exhaustible resources by switching off lights and pulling off plugs on appliances when not in use.

In the end, they are seen sleeping peacefully, satisfied with their efforts towards conservation of mother earth’s natural resources. That makes us wonder – what if all of us could try inheriting a little of that into ourselves? Our little efforts could make a major step towards restoring our planet’s former “green” glory. We could be saving on a lot of resources that could be used to help the poor and needy. In short, we could be doing a great deal of social as well eco-service. Google has surely got us thinking for sure and a bit sad for the current condition of our yellow-turned blue planet.