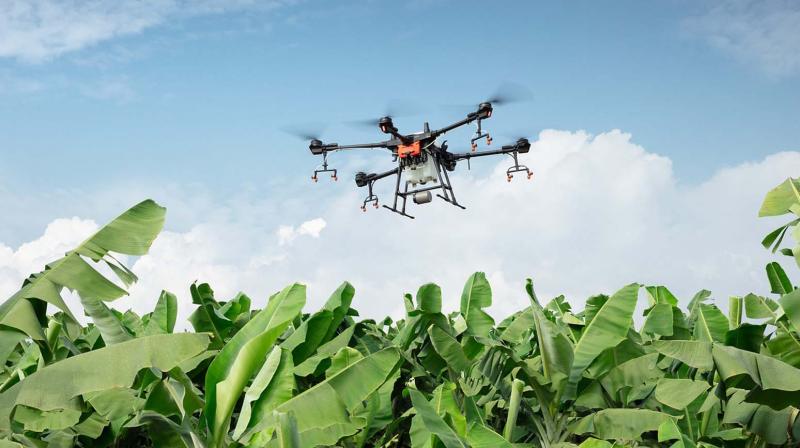 Farmers are slowly using drones, mostly micros or minis, for watering fields, for pesticide or seed spraying -- and they are served by an entire ecosystem of drone developers

In farming as in all economic activity, Schumacher' famous mantra is true: Small is Beautiful. But is it sustainable?

According to the last agricultural census, 85 percent of India's farmers run marginal or small fields of 2 hectares or less. Their output is limited, and they can't compete with the big players because of high production costs, low access to credit, and poor market connections. But a leveler is waiting in the wings: Information technology and its most recent avatars: Artificial Intelligence, Machine Learning, Internet of Things are already helping to even the odds; to give the small players the ability to overcome shortages -- in manpower and information -- and make their businesses viable. December 23 is National Farmers Day in India -- and it is the right time to run an agri-tech reality check

Drones are turning out to be the biggest disruptors, ever since their civilian use in India was regularised by the Civil Aviation Ministry which has classified them based on their maximum take-off weight: Nano (less than or equal to 250 gm); Micro ( 250 grams to 2 kg); Mini ( 2 kg to 25 kg); small ( 25 kg to 150 kg) and Large ( greater than 1250 kg). Farmers are slowly using drones, mostly micros or minis, for watering fields, for pesticide or seed spraying -- and they are served by an entire ecosystem of drone developers. The University of Agricultural Sciences in Dharwad, Karnataka and the KLE Technological University, Hubballi, joined to support the development of drones for crop spraying. They partnered a startup-- SkyKrafts Aerospace -- which developed a drone to carry a maximum payload of 20 litres. The drone can spray one acre per hour or 10 acres per day, saving the manual labour of two persons, explains SkyKrafts founder - CEO Srinivasulu Reddy. The entry level version of their Kissan Drone, weighs 1 kg, can fly for 13-18 minutes and costs Rs 1 lakh. Dozens of Indian startups are now in the business of crafting drones for agriculture and the only impediment to wider usage is the cumbersome procedures to license their usage.

Another leading agritech player is CropIn, which has shrewdly morphed data analytics, AI and satellite-based remote sensing to offer a suite of services for larger operations: on-farm trials for seed suppliers, farm management solutions and interventions at every stage of the crop cycle. Its flagship tool is the SmartFarm which was successfully used at the bottom of the pyramid, by the Tata Trust's Collective for Integrated Livelihood Initiative (Cini) to help over 40,000 tribal households in central India by providing best farming and livestock practices.

An Amazon for farmers

One traditional hurdle for small farmers has been the lack of an affordable supply chain to procure, farming tools, seeds, manure, pest controllers -- and timely cropping advice. This lacuna is now overcome-- thanks to a number of B2B or business to business digital platforms which are the agricultural equivalent of an Amazon or a Flipkart.

The Patna headquartered DeHaat platform at agrevolution.in uses a combination of bricks and clicks -- an online portal and physical stores to touch over 1.7 million farmers with a ' seed to market' solution.

Bangalore-headquartered Agriplex decided that an app on a mobile phone was the easiest way for farmers to access all their supplies says CEO Tejas Narayanaswamy. On the Google Playstore they have an app offering a wide range of seeds and fertilizers, recommended for a specific field or season. Agriplex largely serves Karnataka, but this is a growing field and many such apps now serve regional clientele across India.

Farmkart is led by a team of seven in Toronto, Canada aims to make farming a profitable profession. Every farmer, whether educated or not, gets access to the most affordable agricultural products and services, within 36 hours, in just one click. It has proved popular in Madhya Pradesh where it was launched.
Soon to join is a Bhopal-based startup whose name describes its role: AgriGator is building a platform that will connect grain traders, food processors, wholesalers and logistic providers.