Technology   In Other news  25 May 2020  Big technology firms should be stopped from turning the world into a China, Noam Chomsky says
Technology, In Other news

He is referring to China's social credit system that tracks citizens to award/deduct points on a score determining one's access to services. 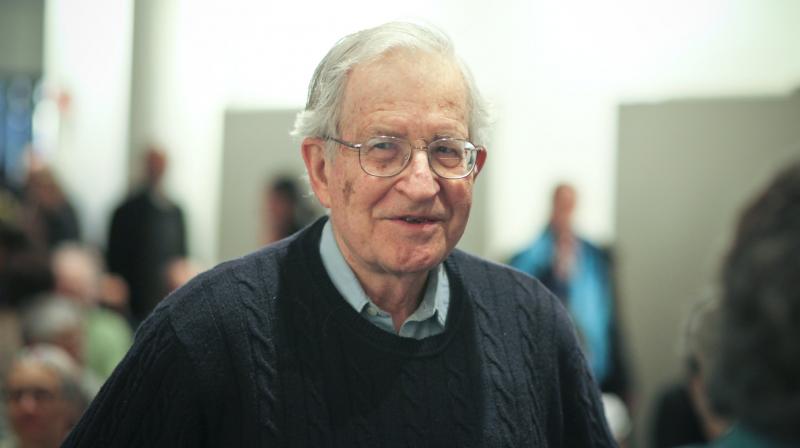 “There are now companies developing technology which make it possible for the employer ... to look at what's on your computer screen and to check your keystrokes and if you get up and walk away for a minute, they'll send you a warning. That's being installed right now.... It's not the future," Noam Chomsky said, highlighting a reality that the public doesn't seem to take cognisance of or care enough about.

New York: The role of technology in helping push back against the novel coronavirus has been hailed widely. But it also means that people are constantly being watched by entities that can set the tone for public behaviour without giving a shred of consideration to people’s privacy. One of the greatest contemporary thinkers, Noam Chomsky, warns of the consequences of technology being allowed to control our lives in the guise of making our lives easier.

In an interview with AFP, Chomsky talked about how the dystopian reality of digital surveillance is already here.  “There are now companies developing technology which make it possible for the employer ... to look at what's on your computer screen and to check your keystrokes and if you get up and walk away for a minute, they'll send you a warning.”

“That's being installed right now.... It's not the future.”

The very things that are convenient are the ones that are invasive, he pointed out. “The so-called Internet of Things is coming along. It's convenient. It means if you're driving home you can turn on the stove — but it also means that that information is going to Google and Facebook, to the government, the American government, the French government, it's an enormous amount of potential control, surveillance and invasion. But this has happened. It's not the future.

“If we allow the huge tech companies, the state, to control our life that's what will happen. They'll turn it into something like China, where you have social credit systems and in some cities you get a certain amount of credits, there's face recognition technology all over the place and everything you do gets monitored.

“If you cross the street in the wrong place, you can ... lose some credits, and so on.

“It's not inevitable, just like global warming, that it's going to happen — unless people stop it.”

When asked whether the use of surveillance was justified in combating COVID-19, said “It might be — during the period of threat. There's controls needed during wartime, you have rationing. But it doesn't have to be permanent.... 'Yes, we'll let you have this authority now, but it can be revoked at any time.'"

Speaking about other major problems facing humankind, Chomsky said global warming was a greater threat than even the deadly pandemic. . “As severe as this pandemic is, it's not the worst problem. There will be recovery from the pandemic at severe cost ... but there isn't going to be any recovery from the melting of the polar ice caps and the rising of sea levels and the other deleterious effects of global warming,” he said.

However, it is evident that the public is either not aware or not bothered to see global warming as a serious enough problem.

That kind of a public in the US also voted for a leadership that has proven itself wholly unequal to the task of managing the pandemic in the country where more than 100,000 people have died of it . “There's no coherent leadership. It's chaotic. The presidency, the White House, is in the hands of a sociopathic megalomaniac who's interested in nothing but his own power, electoral prospects — doesn't care what happens to the country, the world,” Chomsky said, in scathing criticism of President Donald Trump.

Chomsky spelled out how the administration under Trump never even gave the US a chance against COVID-19. “As soon as Trump came in, his first move was to dismantle the entire pandemic prevention machinery. At the start, defunding the Center for Disease Control, which would deal with this. And canceling programs that were working with Chinese scientists to identify potential viruses. So the US was singularly unprepared,” Chomsky said.

He explained the economic model that led to the current situation. “It's a privatised society, very wealthy, with enormous advantages — far more than any other country — but it’s in the stranglehold of private control.

“It doesn't have a universal health care system.... It's the ultimate neoliberal system, actually.”

He compared it to Europe, which in “many ways is worse, because the austerity programs just amplify the danger, because of the severe attack on democracy in Europe, the shifting decisions to Brussels....” But he added, “At least it has the residue of some kind of social democratic structure, which provides some support, which is what I think is lacking in the US.”