Technology   In Other news  25 Aug 2020  Flipkart promises to switch to a full electric vehicle fleet by 2030
Technology, In Other news

It has joined Climate Group’s EV100 initiative to transition to electric vehicles and make electric transport the new normal by 2030. 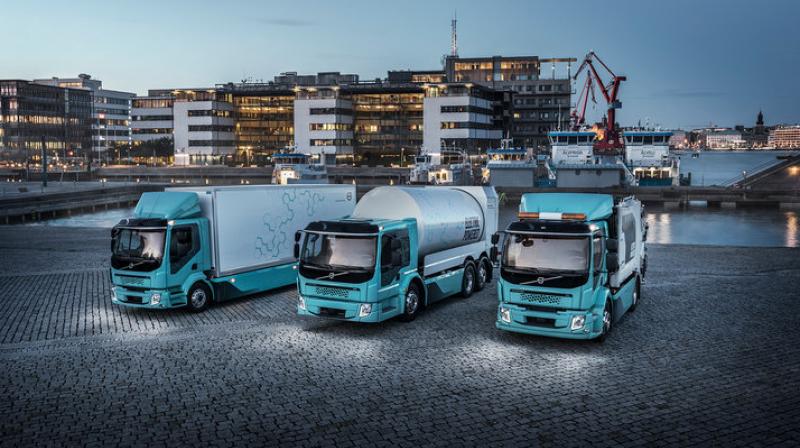 In June last year, Flipkart had said it aims to replace nearly 40 per cent of delivery vans of Ekart, its logistics unit, with electric vehicles by March 2020, and that it was running pilots in Delhi, Bengaluru and Hyderabad. Volvo is one of the automakers that have been producing and operating heavy duty electric trucks as cities in Europe and the US as they go green. (Representative Image | volvotrucks.in)

New Delhi: Walmart-owned Flipkart on Tuesday said it will transition completely to the usage of electric vehicles (EVs) by 2030 as part of its sustainability efforts, and has joined the Climate Group’s global electric mobility initiative, EV100.

EV100 brings together companies committed to accelerating the transition to electric vehicles (EVs) and making electric transport the new normal by 2030.

As a part of this commitment and to support wider adoption of EVs, Flipkart is committing to a phased integration of electric vehicles into the entire fleet (directly owned or leased corporate fleets) by 2030, Flipkart Head (Sustainability and Social Responsibility) Mahesh Pratap Singh told PTI.

“This will be done through placing requirements in service contracts, installing charging infrastructure close to its 1,400 supply chain premises, conducting awareness programs and incentivising delivery executives towards the use of electric vehicles,” he said but declined to comment on the investments to be undertaken.

In June last year, Flipkart had said it aims to replace nearly 40 per cent of delivery vans of Ekart (its logistics unit) with electric vehicles by March 2020, and that it was running pilots in Delhi, Bengaluru and Hyderabad.

“We have seen great traction in the last 12 months or so. We now have EVs in 4-5 cities, there are pilots running in state capitals. We have 8-10 times more EVs on road than what we had a year ago. A combination of all these has given us the confidence to be able to take the pledge to go 100 per cent EVs,” he said.

Asked if the company has been able to meet the target of 40 per cent announced previously, Singh said: “we are making firm progress, it may be a bit off because of issues like COVID-19, but we are on track”.

Flipkart has already deployed EVs in Delhi, Hyderabad, Jaipur and Bhubaneswar. Pilots have been conducted in Pune, Mumbai, Bengaluru, Kolkata and Lucknow and deployment will begin in September.

Over the past year, Flipkart has worked towards creating a wide network of ecosystem partners across charging providers, regulators, policy makers, skill development agencies, aggregators and original equipment manufacturers (OEMs) to work on various areas.

These include designing and the manufacturing of EVs optimised for e-commerce while supporting market demand for EVs to emerge as a mainstream mobility solution, Singh said.

The Indian government has been promoting use of electric vehicles (EVs) in India with a goal of reaching 30 per cent EV penetration by 2030.

“As a homegrown company, we always pride ourselves in making e-commerce more inclusive, progressive and impactful for all our stakeholders, which also includes communities and the planet...

“Our commitment to the Climate Group’s EV100 initiative ties in with this larger vision of environmental sustainability and allows us to learn from the most forward-thinking global perspectives as part of the EV100 ecosystem,” Kalyan Krishnamurthy, CEO of Flipkart Group, said in a statement.

With Flipkart’s scale, scope and intense focus on sustainability agenda, the company believes it can play a significant role in not just fast-tracking the adoption of electric vehicles but also making clean mobility mainstream, he added.

Divya Sharma, India Executive Director of Climate Group, said Flipkart will play a significant role in fostering innovation in technology and exchanging knowledge on e-mobility within its global network of committed businesses.

“To help make swift emissions cuts and improve air quality for the long-term, we urge more Indian companies to follow suit, sending a powerful signal of support to policymakers wishing to see a faster roll-out of EVs,” she added.

As part of the EV100 programme, Flipkart will also get an opportunity to learn from over 70 forward-looking companies from across the globe.

Founded in 2004, Climate Group is an international non-profit organisation. Under the EV100 programme, it is working with companies across the globe to accelerate the transition to EVs.