Technology   In Other news  26 Apr 2020  German startup's escalator disinfecting fitment in demand across globe amid COVID-19
Technology, In Other news

Europe’s largest elevator and escalator makers Thyssenkrupp, Schindler, Otis and Kone were early customers but demand has surged amid corona 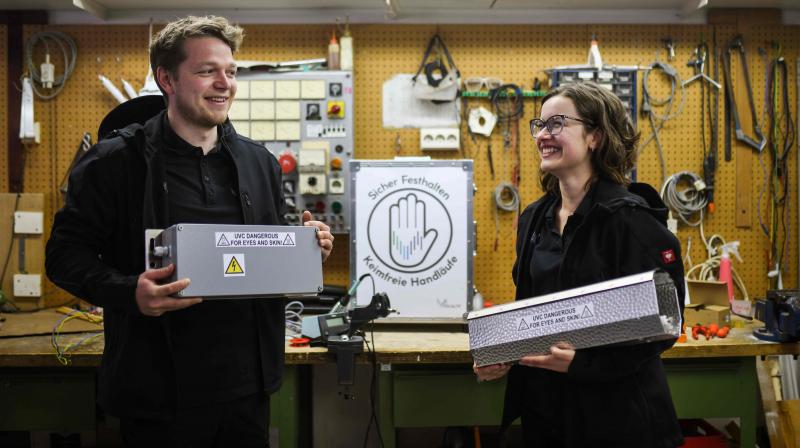 Cologne: Tanja Nickel and Katharina Obladen were still in high school when they patented an idea to disinfect escalator handrails using UV light.

A decade later, their small German startup UVIS can barely keep up with orders from around the world for their coronavirus-killing escalators and coatings for supermarket trolleys and elevator buttons.

“Everybody wants it done yesterday,” Obladen, 28, told AFP at the company’s workshop in central Cologne.

“The pandemic has made businesses realise they need to invest in hygiene precautions for staff and customers. It’s gone from nice-to-have to must-have.”

As Germany begins to relax some lockdown restrictions, the startup’s five-person team has been inundated with requests from shops, offices and cafes eager to reopen to a public newly aware of the health risks lurking in shared spaces.

Friends since kindergarten, Nickel and Obladen were 17 and 18 years old when they entered an inventors’ competition.

Worried about the swine flu pandemic at the time, they wanted to come up with something to make public places germ-free.

Inspired by New York City’s use of ultraviolet radiation to sterilise drinking water, they designed a UV light box that can be built into escalators to disinfect handrails, with the radiation destroying the DNA of disease-causing micro-organisms.

They asked their families for help filing the patent.

“They knew us and knew we would stick with it,” Obladen recalled.

After finishing university, the pair founded UVIS in 2016 with seed money from programmes for startups. They remain a rare example in Germany of women running an engineering firm.

This year, the duo added an antimicrobial coating to their line-up, not based on UV technology. The invisible coating can be sprayed onto surfaces to destroy mould, bacteria and viruses like the novel coronavirus, using the self-cleaning properties of titanium dioxide.

But the coronavirus has seen demand explode.

Interest has been especially strong in Europe and Asia. The startup recently shipped over 30 escalator modules to Singapore.

Standing in the same workshop where her electrician grandfather used to tinker away and where his old hard hats still line the shelves, Obladen demonstrated how the light box works.

Three blue-glowing UVC lamps, emitting the strongest kind of UV beams and highly dangerous when exposed to skin and eyes, line the inside of a rectangular metal case.

The escalator’s handrail passes through the case as it continually loops around, getting a full blast of germ-killing radiation.

The metal case, roughly the size of an adult arm, and an accompanying power box can be fitted into any escalator, which Obladen said was “the biggest challenge”.

UV disinfection was already routinely used in the food industry and hospitals worldwide before COVID-19 spurred wider calls for the technology.

In China, where the virus first emerged, it has been used to clean buses and banknotes.

Obladen said they too were considering other ways to deploy UVC light.