Smartphones, TVs with three times resolution in the offing

Video screens are made up of hundreds of thousands of pixels that display different colours to form the images. 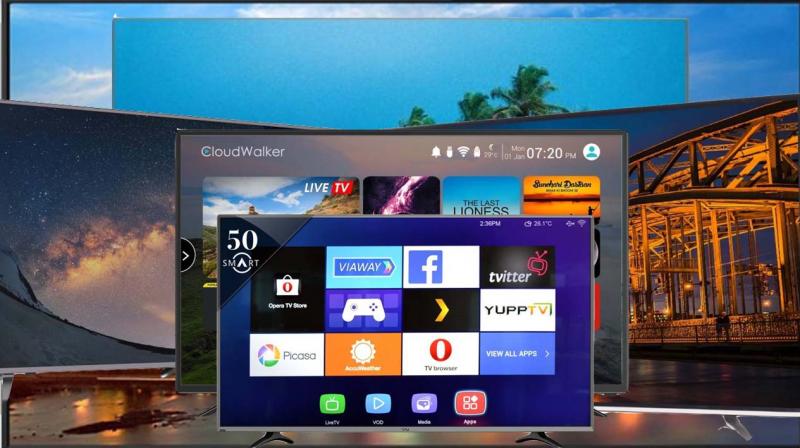 Researchers, including one of Indian origin, have developed a new colour-changing surface that could increase the resolution for TVs, smartphones and other devices by three times.

Video screens are made up of hundreds of thousands of pixels that display different colours to form the images. With current technology, each of these pixels contain three subpixels - one red, one green, one blue.

Now, researchers from the University of Central Florida (UCF) in the US have come up with a way to tune the colour of these subpixels. By applying differing voltages, they are able to change the colour of individual subpixels to red, green or blue – the RGB scale - or gradations in between.

"We can make a red subpixel go to blue, for instance," said Debashis Chanda, Assistant Professor at UCF.

"In other displays that is not possible because they need three static colour filters to show the full RGB colour. We do not need that now; a single subpixel-less pixel can be tuned across a given colour gamut," said Chanda.

Aside from the inherent value of an improved design for the pixel-based displays that are ubiquitous in today's world, their findings have other advantages. By eliminating the three static subpixels that currently make up every pixel, the size of individual pixels can be reduced by three.

That would have major implications for not only TVs and other general displays, but augmented reality and virtual reality headsets that need very high resolution because they are so close to the eye, they said.

"A subpixel-less display can increase resolution drastically. You can have a much smaller area that can do all three," said Daniel Franklin, physics doctoral student at UCF.

Since there would no longer be a need to turn off some subpixels to display a solid colour - there would be no more subpixels, after all - the brightness of screens could be much greater, researchers said.

Franklin and Chanda created an embossed nanostructure surface resembling an egg crate, covered with a skin of reflective aluminium. However, they needed several variations of this nanostructure to achieve the full range of colours.

In the latest research published in the journal Nature Communications, they found that modifying the roughness of the surface allowed a full range of colours to be achieved with a single nanostructure. The nanostructure surface can be easily integrated with existing display technology, so the underlying hardware would not need to be replaced or re-engineered.