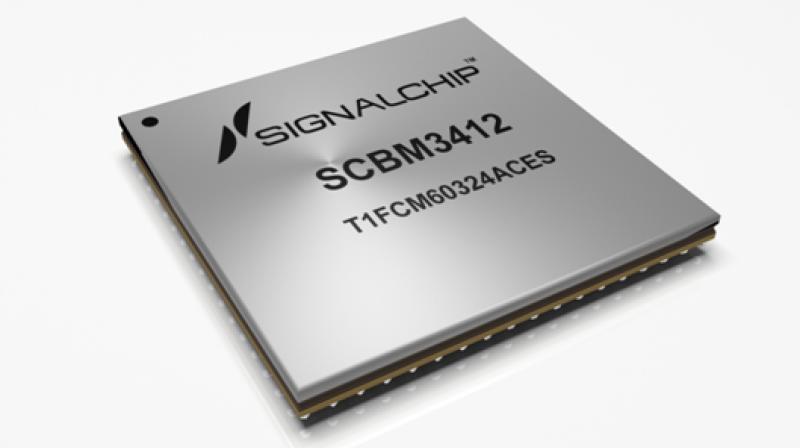 This launch from Bengaluru firm SignalChip places India on the global map for its silicon-chip technology.

Bengaluru-based fab-less semiconductor company, Signalchip unveiled India’s first semiconductor chips for 4G/LTE and 5G NR modems in the presence of Telecom Secretary Ms. Aruna Sundararajan. The SCBM34XX and SCRF34XX/45XX series of chips, code-named ‘Agumbe’, are the result of over eight years of relentless and deep R&D by Signalchip engineers. These chips put India into an elite group of countries that own this widely used fundamental technology.

1.    SCBM3412: a single chip 4G/LTE modem including the baseband and transceiver sections in a single device

The combined multi-standard system-on-chip (SoC) can serve as a base station chipset for a wide range of form factors from low-cost indoor small cells to high performance base stations. These are optimally designed to support evolving network architectures like Open RAN/CRAN with flexible interface configurations. Through the IPs created for this device, the company now has the potential to design products for multiple related fields and is currently forging ahead with additional chipsets for advanced 5G NR features. With India having more than 1.1 billion mobile phones in use, one of the highest in the world, Signalchip has created high performance and cost-efficient systems to enable densification of the network.

Unveiling the chips, Telecom Secretary Ms. Aruna Sundararajan, said, "This is a proud moment for India's Digital Communications industry. I congratulate the Signalchip team for designing India's first indigenous semiconductor chips for 4G/LTE and 5G NR modems. India aspires to take a leadership role in developing inclusive 5G technologies for economic self-sufficiency and strategic needs of the country. These chips are a significant step in this direction as they have the potential to cater to the growing digital connectivity needs of the next 5 billion users, by enabling high performance mobile networks at lower cost.” She added, “The Signalchip team's persistence over the 8-year R&D period and the commitment shown by Sridhar Vembu to believe in this vision is indeed commendable."

At the launch, Himamshu Khasnis, Founder and CEO of Signalchip said, “Currently in India, all devices and infrastructure, whether imported or domestically manufactured, use imported silicon chips. Silicon chip design is a very challenging activity requiring high-cost R&D, deep knowhow and mastery of multiple complex domains. Hence, this technology is not available in most countries. Given that wireless communication is central to almost all economic, strategic and domestic activities happening today, the ability to indigenously design and develop silicon chips is vital for the security and prosperity of our country.”

This team was mentored and funded by Sridhar Vembu, Founder and CEO of Zoho - a pioneer in cloud technology. Sridhar’s association with Signalchip was born out of a common vision to build an enterprise that develops world-class technology from India and caters to the world. The company was also guided by an elite set of professors at IIT Madras in the field of complex analog/RF design.

Sridhar Vembu, Founder & CEO of Zoho said, “India has always had the talent required to build any technology. We just need to be patient and have enough capital to put it all together. It's a long-term commitment. Through smart planning and relentless efforts, Signalchip has acquired the capability required to create any complex and globally competitive silicon chip, indigenously from India. I truly appreciate the patience and diligence the Signalchip team has shown to build this chip. Only long-term R&D can make Indian companies globally competitive."

SCBM3404: 4X4 LTE + WCDMA base station baseband chip: This device implements all digital baseband functions of a 4x4 MIMO LTE base station in a single chip. The device can transmit and receive 4 streams of data and can perform complex 4x4 MIMO reception. This device is targeted for larger form factor base stations to be paired with two SCRF3402 RF transceiver chips either through JESD204B ports on the same board, or through a CPRI link when used in a Baseband Unit that connects to a Remote Radio Unit (RRU).

SCRF3402: 2X2 LTE/WCDMA Analog-RF transceiver chip:  This device implements all analog baseband and RF front end functions of a 2x2 MIMO wireless system in a single chip. It contains the RF portions like low noise amplifiers, power amplifier interfacing with the antenna, filters, high speed data converters, frequency synthesizers, and mixers. The device also integrates a third auxiliary receiver to facilitate network listen, LTE-LAA listen before talk and the reception of navigation signals. This can be paired with SCBM3404 device and external PA modules for covering large area networks. In a unique feature, it supports direct operation with CPRI interface and hence can reduce significant cost in remote radio units.

Signalchip adapts the principle of extreme design optimization as a way to achieve higher performance and Agumbe achieves same performance and functionality as the most advanced LTE modems in the industry while remaining in a relatively inexpensive technology node. This has enabled Signalchip to achieve this task in a significantly lesser cost.

Furthermore, Signalchip’s smart hardware-software partitioning provide extreme design optimization to get more functionality/performance per gate. Extreme integration by including all components of the system from packet processing to high speed digital signal processing to analog baseband to RF components on a single chip, enables optimal analog-digital distribution of processing.