Technology   In Other news  28 Aug 2020  'I can tell when you're sad, I can see that you're fat': Amazon Halo your new blunt best friend?
Technology, In Other news

'I can tell when you're sad, I can see that you're fat': Amazon Halo your new blunt best friend?

The fitness tracker can analyse from the "positivity and energy" in your voice how happy, sad, tired or excited you are. 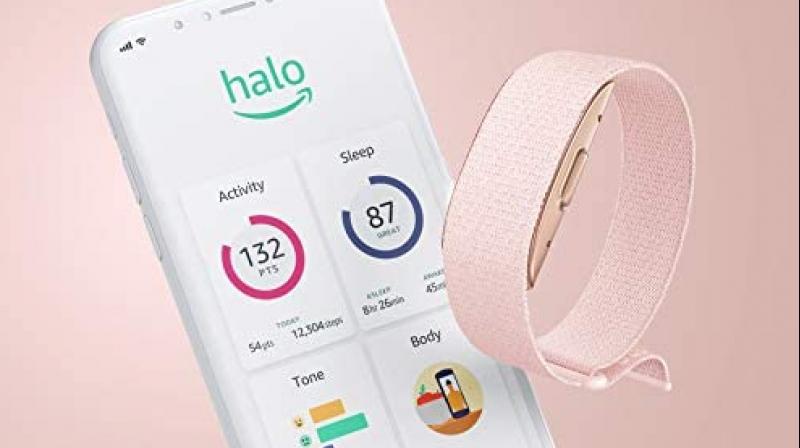 Amazon has been trying to score a hit in the competitive wearable tech business, which is dominated in the US by FitBit and the Apple Watch. Last year, Amazon started selling wireless earbuds, finger rings and prescription eyeglasses with Alexa built in, but none have proven to be hits so far. Will this fitness tracker without a screen manage any better? (Photo | Amazon.com)

San Francisco: Amazon on Thursday unveiled a wristband that goes beyond simply tracking activity to gauging how happy a person is by the sound of their voice.

Amazon Halo combines data gathered by a sensor-packed wristband with artificial intelligence tools to provide wearers with feedback regarding their physical and mental health, the internet titan said.

Amazon might already know what books you like and how often you need toilet paper, but the fitness tracker may give the company a wealth of new information about its customers, although Amazon says it won’t use the for marketing or advertisements or to sell you stuff.

“Despite the rise in digital health services and devices over the last decade, we have not seen a corresponding improvement in population health in the US,” Amazon Halo’s principal medical officer Dr Maulik Majmudar said in a release.

“We are using Amazon’s deep expertise in artificial intelligence and machine learning to offer customers a new way to discover, adopt, and maintain personalised wellness habits.”

People in the US were invited to request early access to Amazon Halo, which was priced at $65 and included six months’ membership access to AI-powered analytics. The regular cost of the device, which has no screen, is pegged at $100.

There’s also a monthly $4 charge to use all of its features. Those who don’t pay up can still track steps, sleep times and heart rates.

Amazon Halo takes on Apple Watch and Fitbit wristwear that provide people with insights about activity levels, sleep patterns and more that could be used to make healthy lifestyle decisions.

Halo can discern intensity of activity, distinguishing walking from running, and reliably assess a wearer’s level of body fat, according to Amazon.

To measure body fat, Amazon is asking users to get personal, scanning their body with their smartphone cameras while wearing boxers or a sports bra with bike shorts.

Jon Reily, global chief strategy officer at Dentsu Commerce and a former Amazon executive, says that the microphones in the tracker could help it listen to how people talk, which could make its voice assistant Alexa smarter by detecting moods and providing better responses.

With the help of microphones in the wristbands, a Tone feature is designed to analyse “the positivity and energy” in someone’s voice to assess how happy, sad, tired or excited they sound, the company said.

“You might see that in the morning you sounded calm, delighted, and warm,” Majmudar said.

“Tone results may reveal that a difficult work call led to less positivity in family discussions, an indication of the impact of stress on social well-being.”

To protect privacy, speech samples are analysed on a wearer’s smartphone—which syncs to their Halo wristband—and then deleted after the process, Majmudar said.

People can turn off Halo microphones by pressing a button on the wristband, he added.

Data has been a concern with other fitness trackers, including FitBit, which tech giant Google is in the process of buying. Regulators in Europe are investigating how the deal could give Google more data to use for personalised ads, furthering its dominant position in the online ad market.

Amazon Halo apps have been tailored for smartphones powered by Apple and Google-backed Android software, according to Amazon.

Seattle-based Amazon has been trying to score a hit in the competitive wearable tech business, which is dominated in the US by FitBit and the Apple Watch. Last year, Amazon started selling wireless earbuds, finger rings and prescription eyeglasses with Alexa built in, but none have proven to be hits so far. Will this fitness tracker without a screen manage any better?