Here are the three best games from the annual gaming gala. 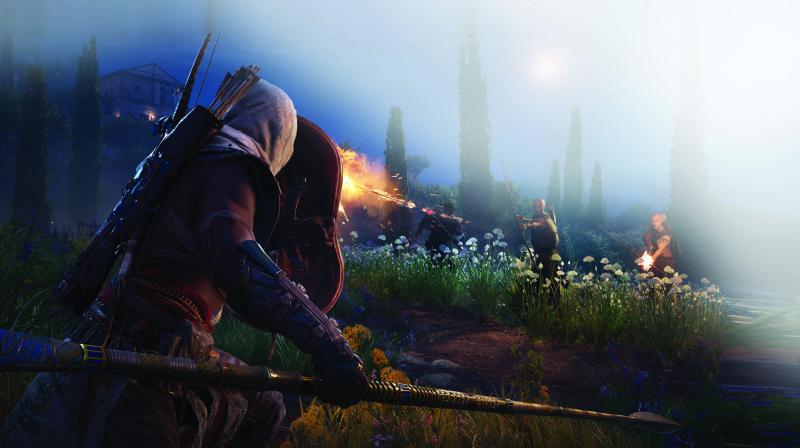 A screenshot from the game Assassins Creed Origins.

Gamescom is every gamers dream destination. For one entire week the city of Cologne is overrun with gamers of all ages trying to attend mini events and parties across town, but the main attraction however is the unbelievable setup over at Koelnmesse for Gamescom.

I was lucky enough to be in attendance and got exclusive access to special builds of the latest games coming out in 2017 and 2018. Out of all the games I managed to try out at Gamescom 2017, here are the best.

Polygon by VR Tech
Polygon was a VR demo that blew my mind away. While its not available to the public yet, the VR game is intended for large theme parks and malls. This is the future of entertainment. Powered by three VR Backpacks, three HTC Vives and another few high end laptops and a lot of motion sensors, Polygon is a coop military shooter where players must walk around, take cover, solve puzzles, activate keypads and of course, shoot dozens of enemies. What makes it stand out from the pack is the fact that its not a VR game that restricts you to where you are, the wireless VR backpacks enable you to move around freely in a 30 sq metre area and the sensors do an amazing job of recreating your body and movements in game, for the most part. The realism and immersion was far beyond what I could have imagined, hands down the best demo at Gamescom this year.

Need For Speed Payback
Arguably the most popular racing franchise in India, the last few Need for Speed games were definitely not up to the mark. I’ll admit I had my doubts with NFS Payback with the added story element with scripted scenes, given our poor experience with NFS The Run, but it seems I was judging a bit too early. I got a chance to play the highway heist mission, race the new BMW M5 and have a chat with the game’s lead designed, Riley Cooper at Gamescom and boy was I impressed. I played it on PC, running 4k 60 FPS and the game looks beautiful. But more importantly, the driving mechanics were quite on point with what you’d expect from a Need For Speed game — easy to drift, solid vehicular combat with the enemies in the games story mode. The game will also be returning with all the cosmetic and tuning customisation options you could ever need and will have a big open world along with regular races and your story missions. There will also be a balance between the scripted story sequences and actual driving.

Assassins Creed Origins
Another popular franchise in desperate need of reinventing itself to hold onto its fanbase, Assassins Creed goes back to the dawn of civilization with AC Origins taking place at the height of the Egyptian Empire. The story, from what I could gather, revolves around Cleopatra (obviously) and a secret organisation trying to overthrow her by discrediting her connection to the gods. I managed to play an early build of the game running on 4K on console and it looked quite impressive. However what I liked more was that the setting of Egypt was brought to life —  lush green cities along the rivers and canals but travel a few 100 metres outside the city and you’re faced with a desolate desert, and of course, the pyramids of Egypt that lay in wait with their many puzzles. The good thing about Assassins Creed Origins I felt was that movement is a bit smoother since there aren’t really flat walls in ancient Egypt, you can climb almost any surface or building, not necessarily looking for grooves or ledges. I got to play a ‘Story Mission’ and explore one of the pyramids during my session, which allowed me to get a look at what the game offers at a very surface level. The combat revamp is quite interesting as now you can carry and equip multiple weapons that you can swap out based on the situation. The skill tree also lets you customise your playstyle, you gain the points by completing story missions or pyramid challenges in the open world. Overall, there are a lot more RPG elements and exploring this time around and quite frankly more content than ever in an Assassins Creed Game, so I’m excited to see where this takes us.