iBall's new feature phone focusses on the holistic needs of seniors with a bigger screen than the counterparts. 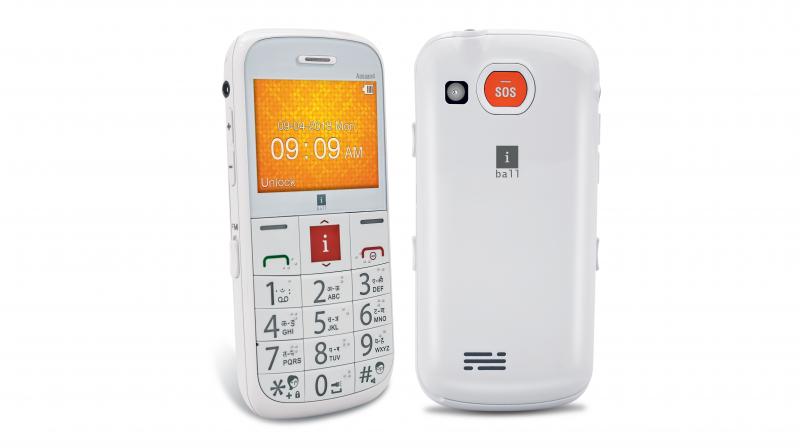 The iBall Aasaan 4 comes with unique features of ‘Braille and Talking keypad’ for the visually impaired as well as mobile tracker which alerts one of the predefined family members once the new SIM card is inserted.

The device features a larger 2.31-inch screen, large display fonts and large dialling keys. iBall's new feature phone focusses on the holistic needs of seniors with a bigger screen than the counterparts. It also comes with unique features of ‘Braille and Talking keypad’ for the visually impaired as well as mobile tracker which alerts one of the predefined family members once the new SIM card is inserted. Users who are not conversant with Braille can activate the talking keypad feature that speaks out the digit pressed in English.

Keeping security as utmost importance with senior citizens, Aasaan 4 comes with the SOS feature which will help the users to get help during emergencies. Pressing the SOS button sets off a siren to alert the folks nearby; It also starts sending SMS to five predefined numbers and starts calling five predefined loved ones till one of them picks the call. Keeping in mind on communication needs during emergencies, the phone is equipped with the activated speed dial. At the touch of a button, it gets automatically directed to the first emergency contact.

With the built-in app ‘Aasaan’ the phone also backs senior citizens’ needs. It comes with 'Medicine Reminder' that will help keep their road to recovery on track, while the 'Hearing Aid' feature allows conversations with better clarity. The feature phone also acts as the Magnifier to zoom in and read out contents with clarity, while the Human Voice incoming call enables to know the caller without straining an eye. Users can also save favourite speed dial numbers on the ‘*’ and ‘#’ keys, thus avoiding the hassle of remembering the speed dial numbers assigned.

The dual-SIM phone is backed by a 1800mAh battery. It supports MicroSD expansion of up to 32GB and can store up to 200 text messages and 1000 contacts on the phonebook. The phone is also armed with ‘Chambered Speaker’ and built-in FM Radio.