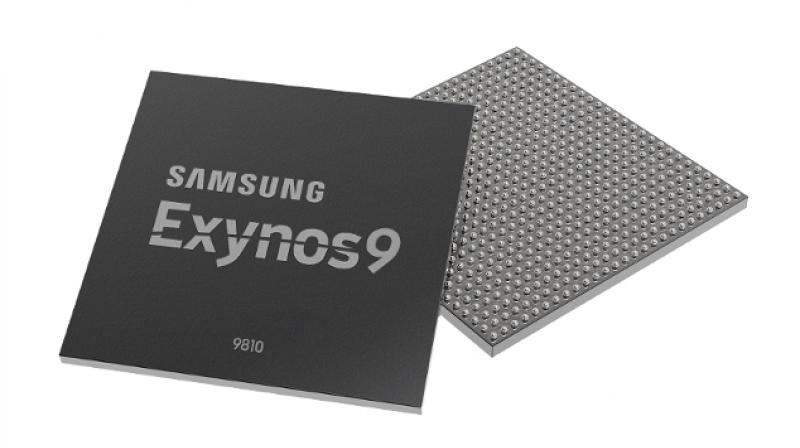 The Exynos 9 Series 9810 is currently in mass production and is expected to be a part of Galaxy S9’s specifications list, which is due in early 2018.

In Exynos 9810, the processor has a new eight-core CPU under its hood, four of which are third-generation custom cores that can reach 2.9 GHz, with the other four optimised for efficiency. With an architecture that widens the pipeline and improves cache memory, single-core performance is enhanced two-fold and multi-core performance is increased by around 40 per cent compared to its predecessor.

Exynos 9810 introduces a technology that allows the processor to accurately recognize people or items in photos for fast image searching or categorisation, or through depth sensing, scan a user’s face in 3D for hybrid face detection. By utilising both hardware and software, hybrid face detection will try to enable realistic face-tracking filters as well as stronger security when unlocking a device with one’s face. For added security, the processor has a separate security processing unit to safeguard vital personal data such as facial, iris and fingerprint information.

The LTE modem in the Exynos 9810 makes it much easier to broadcast or stream videos at up to UHD resolution, or in even newer visual formats such as 360-degree video. Following the 1.0Gbps LTE modem last year, Samsung claims the first 1.2Gbps LTE modem is embedded in Exynos 9810. The company also claims it as the first Cat.18 LTE modem to support up to 6x carrier aggregation (CA) for 1.2Gbps downlink and 200Mbps uplink. Compared to its predecessor’s 5CA, this new modem might deliver more stable data transfers at a decent speed. To maximize the transfer rate, the modem supports a 4×4 MIMO (Multiple-Input, Multiple-Output) and 256-QAM (Quadrature Amplitude Modulation) scheme, and utilises enhanced Licensed-Assisted Access (eLAA) technology.

The upgraded MFC supports video recording and playback at up to UHD resolution at 120fps. With 10-bit HEVC (high-efficiency video coding) and VP9 support, the MFC can render 1,024 different tones for each primary colour (red, green and blue). This translates to a vast 1.07 billion possibilities of colours, or 64 times the previous 8-bit colour format’s 16.7 million.

The Exynos 9 Series 9810 is currently in mass production and is expected to be a part of Galaxy S9’s specifications list, which is due in early 2018.