HTC's U Ultra is a beautiful phone with too many flaws. 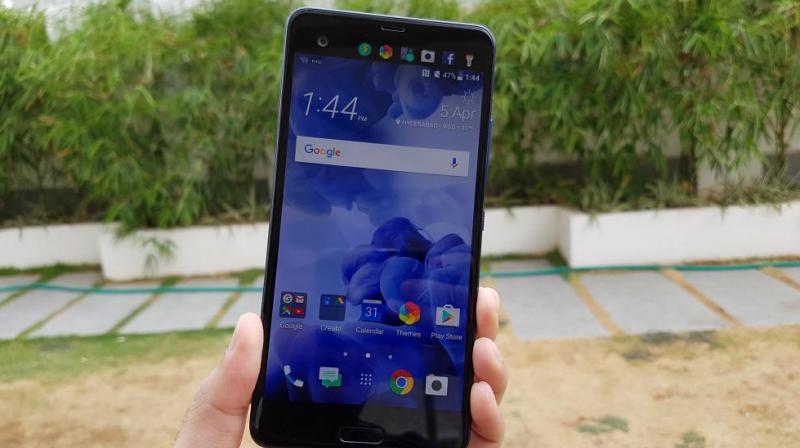 The HTC U Ultra is powered by Qualcomm's Snapdragon 821 chipset.
Rating:

If you are in the market for flagship Android phone, Samsung, LG, and HTC are the brands to watch out for. While the Taiwanese handset maker HTC never actually matched Samsung in terms of sales, it does have a significant fanbase. In light of Samsung's recent Galaxy Note 7 failure, HTC had a window of opportunity to turn some of the Korean company's customers on its side. HTC took the shot at filling the gap left by Samsung's ill-fated oversized phone with its U Ultra. Now, let’s find out how good it has turned out to be. Starting off with HTC's strong department, design.

HTC may not be doing well in terms of finances. However, as long as design is concerned, it has proved itself time and again. The Ultra U is no exception. It is an outright premium phone with some incredibly fancy materials gone into the manufacturing process. The Ultra U's design is a clear departure from HTC's previous flagship handsets. Unlike the HTC 10, which looked sharp, the Ultra U looks more on the curvy side. 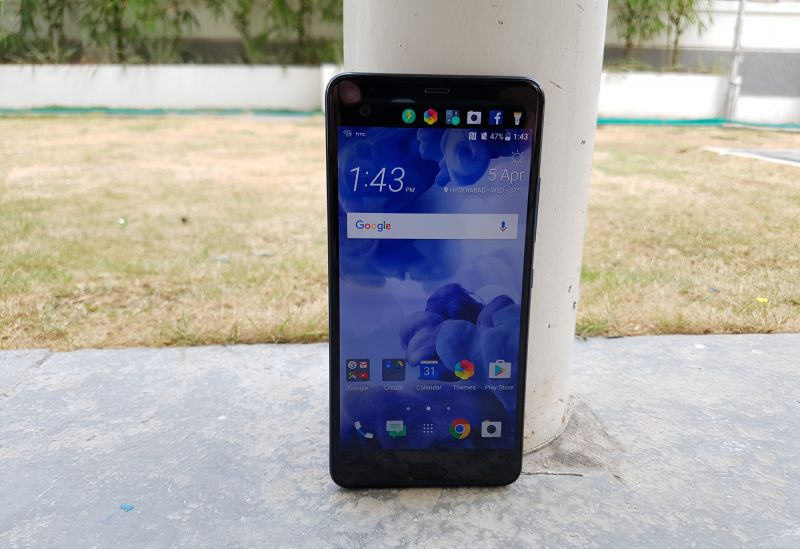 HTC built a lot of hype around its colouring process. Unlike other premium smartphones, the hues on HTC Ultra U run through the glass instead of sitting under it. HTC calls it the "liquid surface", and without a doubt, it looks stunning. To fully appreciate HTC's work, you have to take a look at the blue variant.

It does however picks up fingerprints like there's no tomorrow. So much that I have been carrying micro fibre cloth handy only for this phone. Since the glass back is incredibly slippery, you have to be careful not to drop the phone. As a precautionary measure, HTC bundles a clear plastic cover with every HTC Ultra U handset. 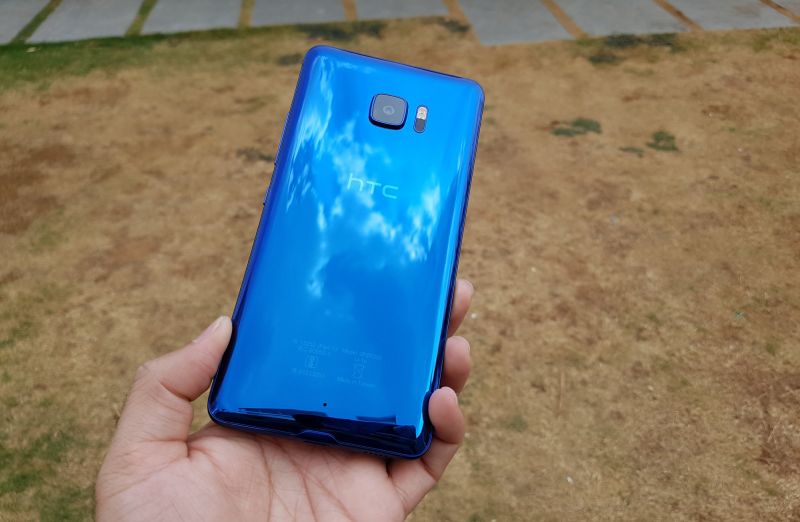 Considering that this phone costs Rs 60,000, the lack of water and dust resistance is criminal. Competing phones such as the Galaxy S7 Edge and iPhone 7 can easily withstand liquid and dust.

Following Apple's footsteps, HTC has dropped the 3.5mm audio jack in favour of USB audio. The same type Type-C USB port is also used for charging. This effectively means that you can't charge your phone and listen to the music simultaneously. 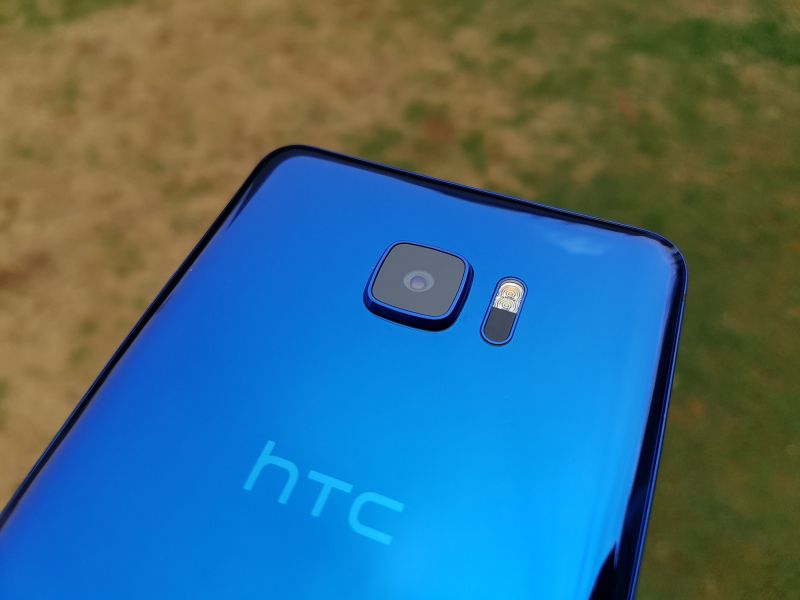 The phone has a 5.7-inch Super LCD5 panel with 1440x2560 pixels. The 2K display is no match for the OLED found on Samsung's flagship phones. Comparing it strictly with LCD panels, it is nowhere as good as the IPS panel found on the LG G5 either. Similarly, the iPhone 7 Plus' screen is way better than what HTC has to offer. Among the top-end handsets, the U Ultra has the worst rendition of blacks. Moreover, the colour shifts are noticeable at angles. 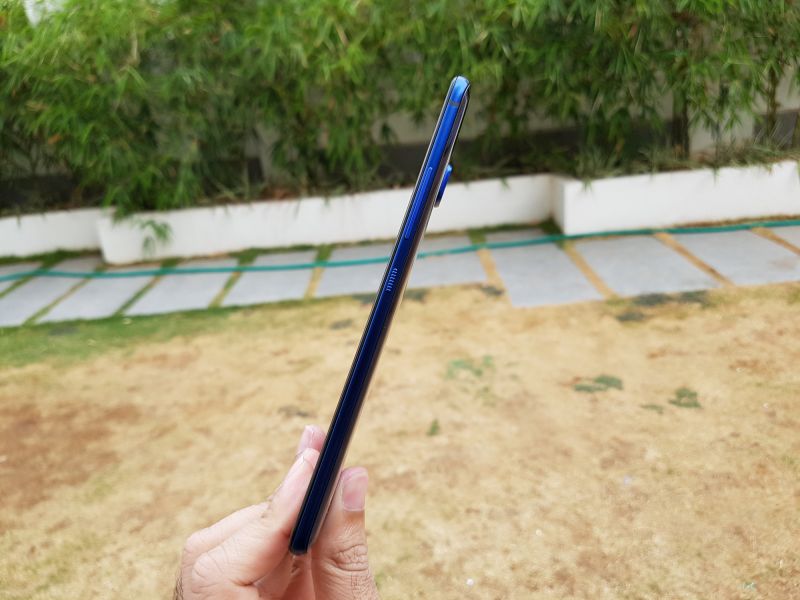 Right above that there's a secondary 2-inch screen strip sitting beside the front-facing camera. The placement is pretty reminiscent of LG's V10 and V20. The idea of a secondary screen looks good on paper, but it looks awful in reality. HTC has used an LCD panel, which is sad at producing blacks. Hence, you can clearly see the separation between the bezel and the secondary display. This kills the symmetry; we have come to take for granted in every smartphone.

The handset runs Android Nougat with HTC's Sense customisation on top. While Samsung's UI is utilitarian, HTC aims for aesthetics. Undoubtedly, it is the best looking Android skin in the market. HTC has made changes to Android where it makes sense. For instance, stock Android looks puerile. Hence, HTC has brought in some elegance with its classy icons, typography, and transition effects. The overall effect is that the Sense UI looks way more cohesive than Google's version. 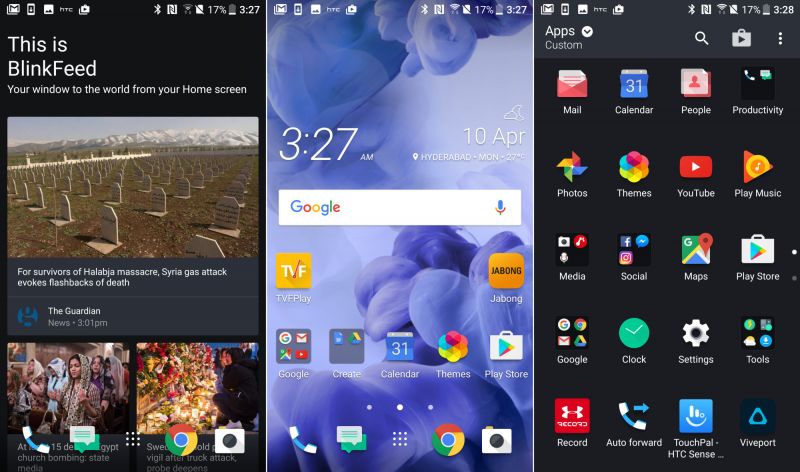 At the same time, HTC has decided not to tamper with things where Google clearly outperforms it. Hence, you won't see HTC’s browser, Scribble, and office suite. BlinkFeed is still present though. You can access it by swiping right from the first homescreen. BlinkFeed aggregates news and updates from different sources and your social profiles. HTC has started showing up ads in this feed, which is quite annoying.

AI is the new buzzword. Not wanting to lose out on this gimmick, HTC too has built its Sense Companion virtual assistant. The goal here is to nag users with information that they may need. For better or worse though, the feature is not live for users in India. 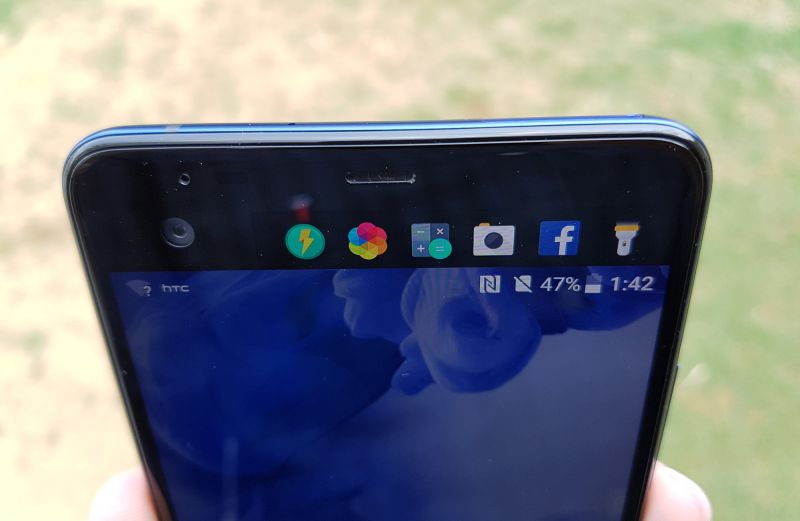 The secondary screen is used for surfacing notifications. It gives you access to your favourite contacts and apps. You can access music playback controls for pre-loaded apps. Moreover, you can also access settings tray. In use case though, I hardly found myself using the second screen except when I wanted to check time without unlocking the phone. In short, this additional piece of hardware is nothing more than a gimmick.

The HTC U Ultra is powered by Qualcomm's Snapdragon 821 chipset. This 64-bit chip comprises of two 2.15GHz Kryo and two 1.6GHz Kryo processors. To handle graphics, you get Adreno 530 GPU. The phone has 4GB RAM, 64 GB internal storage, and a microSD card slot. The latter is a hybrid slot, which means you can either expand the storage or add a secondary SIM.

Hardware junkies will be disheartened by the lack of Snapdragon 835 SoC. However, the U Ultra's processor packs-in more than enough power to keep everything run smoothly. Be it heavy multitasking or resource hungry games, the phone handles it all. The only concern here is that the HTC U Ultra heats-up during gaming.

Since the phone lacks a 3.5 mm audio jack, using your favourite earphones with the U Ultra is out of question. It does however comes with a fancy USB earphones, called USonic. These earphones, made specifically for the U Ultra, analyse your ears by sending a sonic pulse. The technology works much like SONAR. Based on its findings, the HTC software then fine-tunes the earphones for your ears. 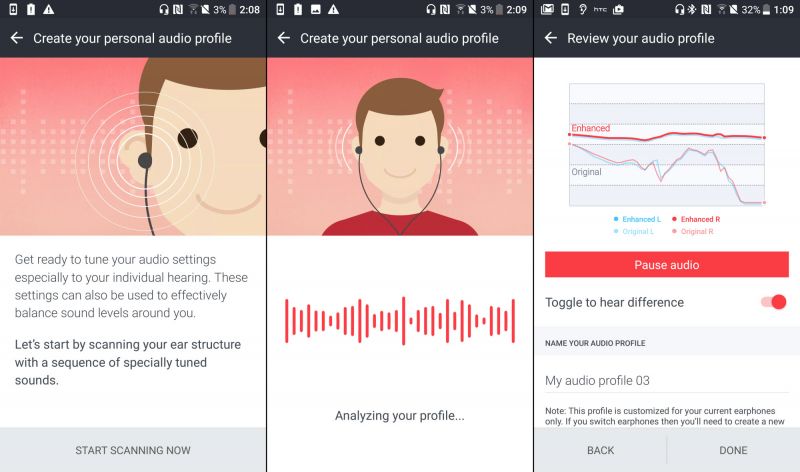 On paper, it sounds impressive. However, in reality, the audio profiles it created for five different individuals sound exactly the same. The software does try to impress you with some fancy graphs, but the sound enhancement feels merely a bass boost option found in most phones.

The U Ultra comes with a 12-megapixel rear camera. It has OIS (Optical Image Stabilisation) to enhance performance in low-light. HTC has also thrown in Pro mode that offers control over white balance, exposure, ISO, and shutter speed. This interface is reminiscent of Lumia camera found on Windows Phone, and is ideal for shutterbugs.

Thanks to laser focus system, the camera is quick to lock on objects. In good lighting, the shots contain good amount of detail. The colours look good too.

The U Ultra pulls off better low-light performance than any of HTC phones. Compared to the likes of Galaxy S7 edge and Google Pixel though, U Ultra has a long way to go in terms of quality.

The camera supports 4K video recording. If you do not have high capacity microSd card, it is better to stick with Full HD. Moreover, the handset tends to heat-up when recording a 4K video.

To please the selfie-lovers, the U Ultra is equipped with a 16-megapixel front-facing snapper.

The HTC U Ultra packs-in a 3000mAh battery. Of course, it is a downer considering that the S7 edge comes with a 3600mAh pack. Little wonder then, that the phone hardly lasts a day without needing a top-up. If you play games or record 4K clips, it will run out of juice even faster. It is a shame that despite such a huge footprint, HTC only managed to squeeze in a 3000mAh battery.

The HTC U Ultra is a great looking handset. Every inch of the phone screams premium. Especially, the coloured glass on the back shows HTC prowess in manufacturing process. However, this beautiful phone is let down by harsh realities such as average battery life and lacklustre camera. To make the matters worse, its keys features including the secondary screen and USonic earphones are mere gimmicks.

Despite costing almost 60k, the phone lacks water and dust resistance. Display too is not good enough to compete with the likes of the Galaxy S7 edge and iPhone 7. All in all, HTC's U Ultra is a beautiful phone with too many flaws.

— by Chandrakant Isi. Chandrakant has been covering all-things-tech for over a decade. He is a sci-fi aficionado, wannabe space explorer, and Content Lead at MySmartPrice.com. He hates writing about himself in third person