Samsung is expected to launch its Galaxy Note 8 smartphone on 23rd August at its ‘Unpacked’ event. 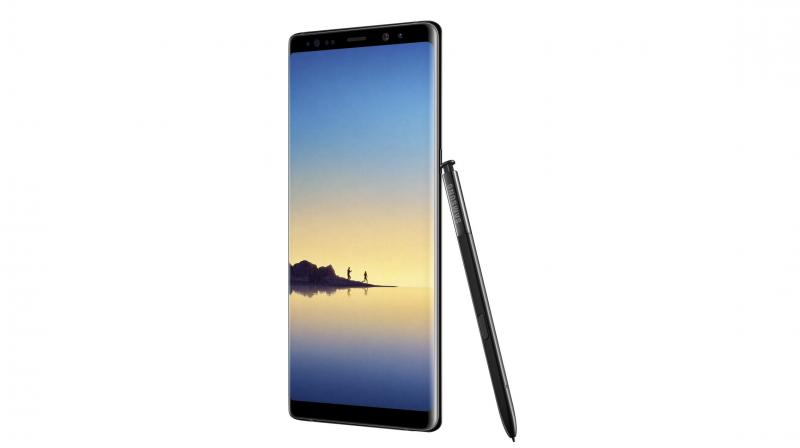 The smartphone has now appeared online in a new batch of leaks revealing storage information, colour variants, what's inside the box, as well as live photos. (Representational image)

Samsung earlier last week confirmed that they were going to be launching their highly-anticipated Galaxy Note 8 phablet on 23rd August at the company’s ‘Unpacked’ event. Unfortunately, the company did not provide any productive details regarding what one can expect from its Note 7 successor. Thanks to the endless leaks and speculations, the fans have a vague idea of what to watch out from the upcoming high-end smartphone. The latest leak seems to have revealed the possible colours that the smartphone is going to arrive in.

Alleged colour variants along with wallpapers of the upcoming Galaxy Note 8 smartphone appeared on the Chinese social media platform, Weibo and a Vietnam-based blogsite, Samsungvgn.com. On the basis of the information provided through the latest leak, it is safe to assume that the upcoming high-end phablet is going to arrive in eight colours: Midnight Black, Arctic Silver, Orchid Gray/Violet, Coral Blue, Dark Blue, Deep Sea Blue, Pink, and Gold. The post on Weibo also revealed the rear panel of the smartphone, thereby confirming the integration of the dual rear camera setup. The front panel of the smartphone will probably be black in colour, with the device’s S Pen matching the colour variant that users choose. Stunning new wallpapers expected to come with Samsung’s Galaxy Note 8 smartphone have also been consequently published.

A report by ETNews recently suggested that the device will end up carrying a free transparent case (which costs roughly Rs 1,100 to Rs 1,600) along with the smartphone itself.

Additionally, the Samsung Galaxy Note 8 smartphone is also expected to come with force touch support built into the device, reported South-Korean website The Investor. If this turns out to be true then it seems like Samsung is following Apple’s footsteps, as the latter integrated the 3D Touch feature in its iPhone devices last year itself. “The so-called force touch will work very much the same as that of the Galaxy S8 and S8+ smartphones, which Samsung adopted earlier this year for its flagship devices, replacing the functionality of the home button and providing shortcuts to various common functionality of some of the pre-installed Android apps,” a report by Softpedia reads.

As per previous leaks, the upcoming Galaxy Note 8 smartphone is expected to sport a 6.3-inch Super AMOLED display, a dual rear camera setup, a 3,300mAh battery and 6GB of RAM tagged along with 64GB of internal storage.