After resounding success of the Note 5, Infinix has launched the Note 6 with X Pen stylus. 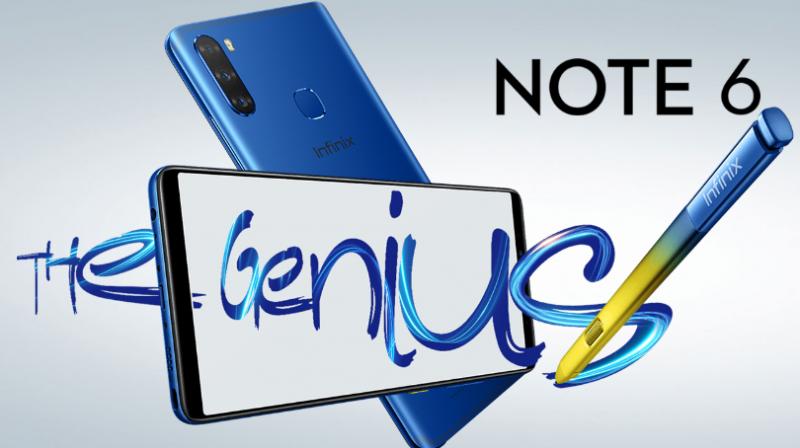 Infinix fans will appreciate the compact 6.01-inch FHD+ Always-On AMOLED display that bears the 16MP camera at the top.

The Samsung Galaxy Note 10 launch is just around the corner and in a bid to steal some of its sparks, Infinix has launched the Note 6, a budget smartphone with all the bells and whistles of a flagship device. And just like the Note 10, this handset will come with stylus support as well and the brand refers to it as the X Pen.

The Infinix Note 6 features a Helio P35 chipset that’s paired with 4GB of RAM and runs XOS 5.0 on top of Android 9 Pie along with 64GB of storage. This ROM can be further expanded by way of a micro SD card up to 128GB.

Infinix fans will appreciate the compact 6.01-inch FHD+ Always-On AMOLED display that bears the 16MP camera at the top. At the back, you get a fingerprint scanner and a triple rear camera setup which comprises of a 16MP primary sensor, an 8MP ultra-wide camera and a 2MP depth sensor. The handset comes with a stylus and as mentioned earlier, the brand terms it as an X Pen. Using the stylus with AI and AR you can “create immersive sketches or notes in any space within reach." The X Pen can also be used with a feature called AR Measure to measure objects in the real world.

To keep the Infinix Note 6 juiced up, the brand has added a 4000mAh battery which is becoming a commonality on all smartphones these days. Unfortunately, there’s no Type-C slot here but a micro USB charging port. The handset is available in Midnight Black, Mocha Brown and Aqua Blue. Interestingly, the Blue variant comes with a goldish yellow power button that enhances the appearance of the device.