Apple foldable device unlike anything you expect

Apple will make its entry into the foldable smartphone category with something that isn’t a smartphone. 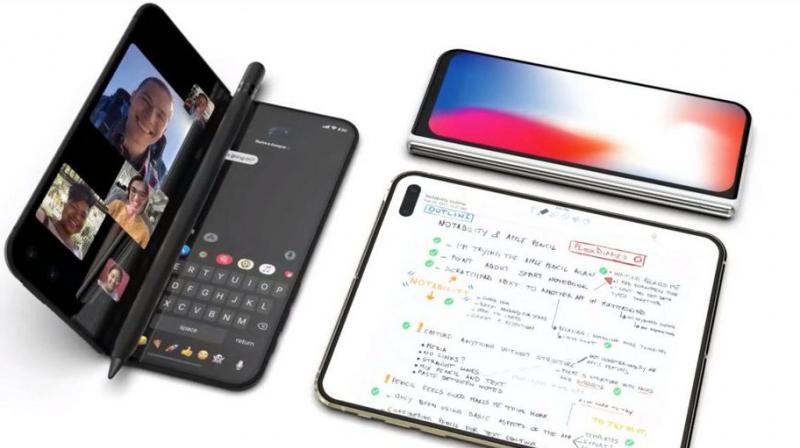 The Apple foldable device will be unexpected. (Photo: EverythingApplePro)

2019 is the year when smartphone manufacturers are going all-out with various form factors as displays can now be folded. The Samsung Galaxy Fold and the Huawei Mate X are the two best-known products in this category; however, other brands such as Xiaomi, Motorola and others are also believed to have their own devices in the works. After a ton of rumours and speculations, Apple also appears to be working on a device and it’s nothing like the Galaxy Fold or the Huawei Mate X. Instead, it will be a foldable device in a category that’s not seen such a form factor so far.

As per a report by Trusted Reviews, based on patents filed in the last few years, analysts have come to the conclusion that Apple isn’t working on a foldable smartphone. Instead, the foldable iDevice will be a folding iPad and it will feature an in-display fingerprint scanner.  This 2021 product is surprising as many believed that Apple’s first foldable device would be an iPhone and not a tablet.

A UBS report states that Apple is “steadily working on the technology;” however, it is a few years away to becoming a reality. The major hurdle here is nothing but the massive price tag that will be associated with it. The report states, “A survey has found that people interested in a folding Apple device are only willing to pay a maximum of $600 on top of the price for the ability of folding it up, but considering that Samsung’s ill-fated Galaxy Fold was planning to retail for $2,000 at launch, which could put the price out of reach for even hardened iFans.”

As of now, this foldable technology is still in its fledgeling state and the first folding smartphone was supposed to be the Galaxy Fold. However, several reviewers who had the opportunity to test the product ahead of its launch managed to break the device. This prompted Samsung to perform a recall and push back its April launch date. Now, after months of internal testing and redesigning the Galaxy Fold, Samsung will be launching their Galaxy Fold in September.

With Apple, they will want to launch a foldable iPad that has a twist to it. The report goes on to state, “However, based on the fact that Apple is now moving from design into being a more security-conscious company, it’s hard not to see the prospect of a folding phone from the tech giant as a case of the emperor’s new clothes. After all, who really wants a folding phone, beyond to brag about having a folding phone?”