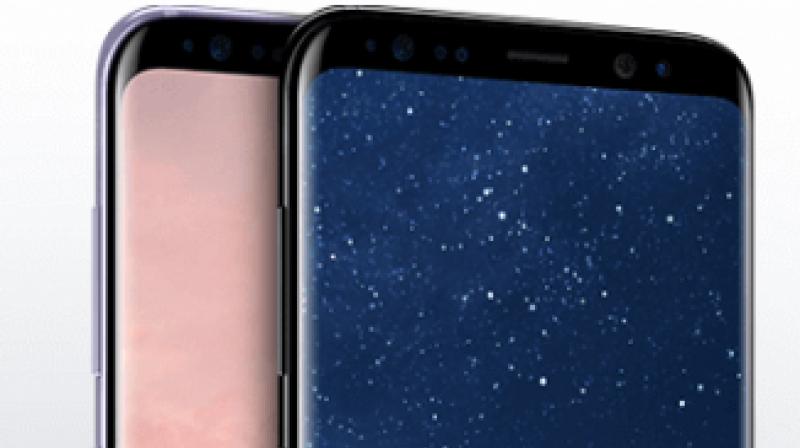 The day has finally come when Samsung’s new top-notch babies are finally launched in the country. While everything was in paper and all over the internet, there’s no feeling like having to touch it for the first time. I finally got to have my hands on the two display units at the launch event here in New Delhi and here is what I have to say about the Korean smartphone giant’s latest innovation.

At first glance, the phone looked all glass with a tiny little footprint that makes the phone look smaller than it actually is. From the very beginning itself, it was always about that display. The design is a jaw-dropping edge-to-edge bezel-less unit that simply shuts anyone who would probably challenge the design element. In fact, even Xiaomi’s Mi Mix does not stand a chance here as the device is still larger than the Samsung, even with its almost-bezel-less body. 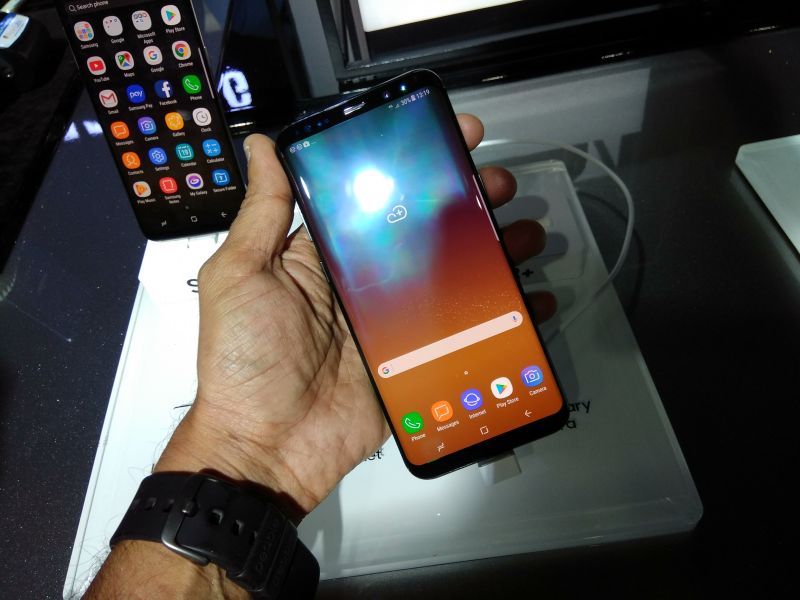 The curved glass takes a step further from the previous siblings, the Galaxy 7 Edge. The display’s curve goes all around the sides, creating an infinity display look, hence the name ‘Infinity Display’. The almost-bezel-less smartphone has a display that blesses the phone with an 80 per cent display-to-body ratio. Filled with enough pixels to give you an immersive display quality, the Super AMOLED panel sports a resolution of 2960 x 1440 pixels on a surprisingly smaller, yet large enough 5.8-inch display on the Samsung Galaxy S8 and a 6.2-inch on the Galaxy 8+. Both the handsets are protected with a stronger Corning Gorilla Glass 5. 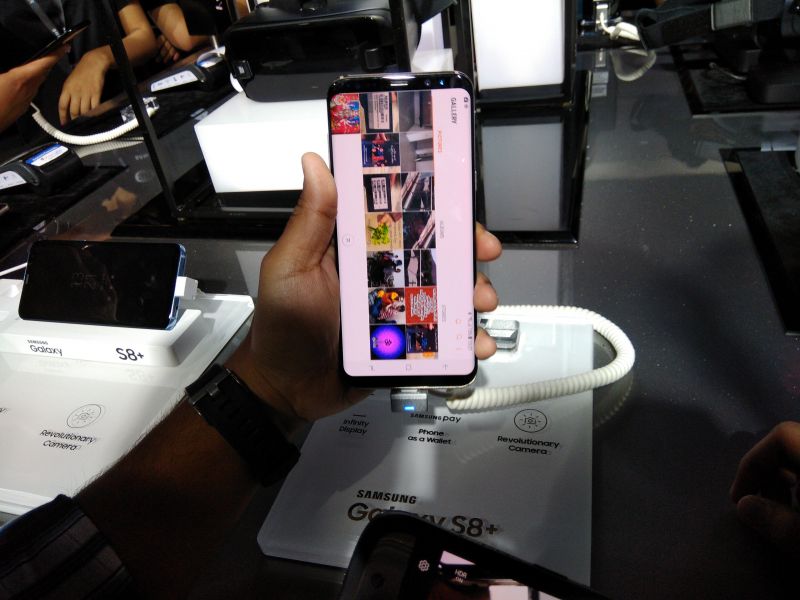 The display is pretty glossy, and so is the rear glass panel. So being a fingerprint magnet is what you could term the two new entrants as. However, if you own one of these, you should immediately get yourself a silicon case – transparent if possible – not only to protect it from grime, but also to prevent any accidental damage to the most expensive display around. The rounded edges also tend to get a little slippery, especially if you have clumsy hands.

The aspect ratio on the two display units are a weird 18.5:9, which make it look taller and slimmer as compared to other smartphones with a similar display size out there. The display also made do with the physical home button completely, making the forehead and chin thinner than usual and hence giving the smartphone a larger look on a smaller footprint. Though the home button has gone away, the click hasn’t. A haptic buzz greets you to a physical button feel, similar to that witnessed on the latest iPhones. 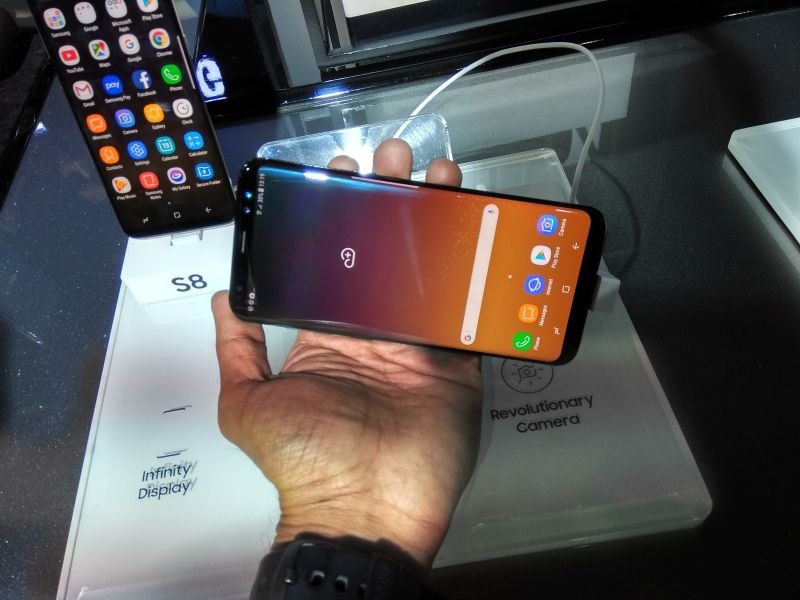 The phone feels comfortable to hold – thanks to the weird aspect ratio and the curved edges that gives it a larger screen size on a smaller dimension. The home button is now replaced by software buttons that are replaceable – you can switch the menu and the back buttons from the settings for user preference. The fingerprint that was usually up front below the home button, now takes to the rear panel, besides the primary camera. To my comfort, though this is one of the most comfortable places to have a fingerprint sensor. 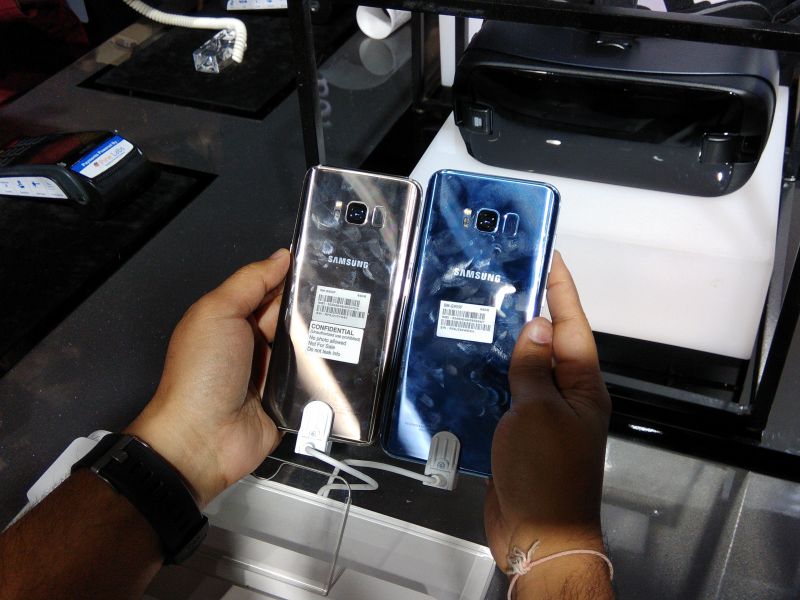 However, Samsung has managed to ruin it a little as it is too close to the camera and can cause discomfort as the finger tip does not always reach comfortably there. Additionally, the finger tip can accidentally create a smudge-town on the camera. Getting used to the fingerprint stretched to the side of the rear panel can take a little getting used to, even for those with larger hands. To sum up the display area, Samsung has definitely managed to put almost all of it there without sacrificing anything – from quality, to functionality and even down to the thickness. 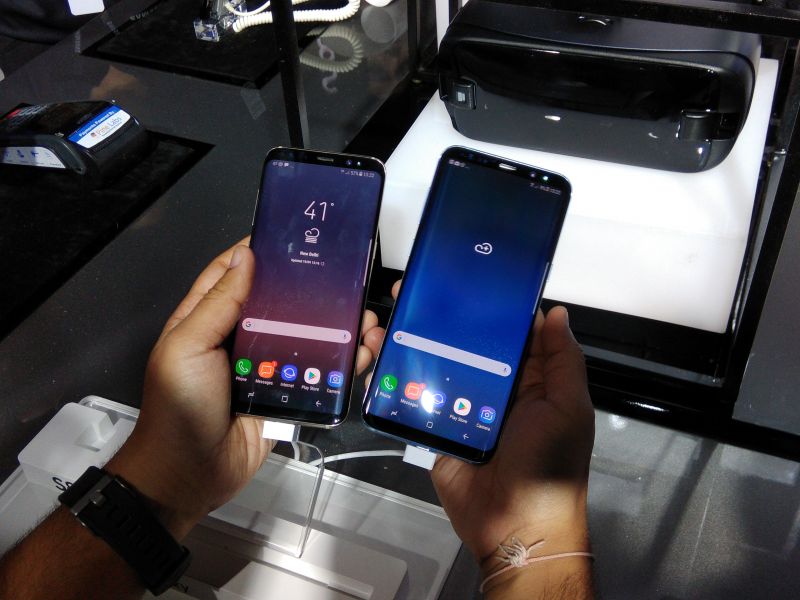 Heading on to the interiors, the new Samsung Galaxy flagships are presently the only fastest smartphones out there. The S8 and S8+ are the only smartphones with Qualcomm’s Snapdragon 835 chipsets sporting quad core processors and an Adreno 540 graphics support with 4GB of RAM and 64GB of storage, expandable to 256GB using a micro SD card. India may not be as lucky to receive the 6GB RAM variant, but who knows if Samsung may just change its mind later. Also, the Indian variant of the Samsung Galaxy S8/S8+ will employ the Samsung’s in-house developed Exynos 8895 processors which are just as good as the Snapdragon 835 chipsets.

As for the camera, Samsung seems to have worked pretty hard this time. Sporting a Dual Pixel 12MP rear camera with Optical Image Stabilization (OIS) and a front 8MP camera with auto-focus, the Galaxy’s cameras need to be taken for a test drive later. The camera has been stated to focus heavily on quality with the hardware working harder on the image processing as opposed to the earlier software APIs that used to do the trick.

While both the flagships sport identical looks and hardware, the only differences between the two are the display size and the battery (3000mAh on the smaller one and 3500mAh on the larger) – and obviously the price. The Samsung Galaxy S8s are powered by Google’s Android Nougat, sport 4G Nano-SIM slots with expandable storage options and as usual, retain the IP68 water and dustproof body and wireless charging. Other highlights that should not go unnoticed are support for Bluetooth v5.0, iris scanning as additional security apart from fingerprint, face scanning and KnoX, audio enhancement with Samsung’s newly acquired audio company Harman and definitely the new option to convert your S8 smartphone into a desktop PC using the new Dex dock. Lastly, both devices sport NFC and MST. The two features along with support for Samsung Pay will help make cashless payments easier than before and probably make plastic money a thing of the past. 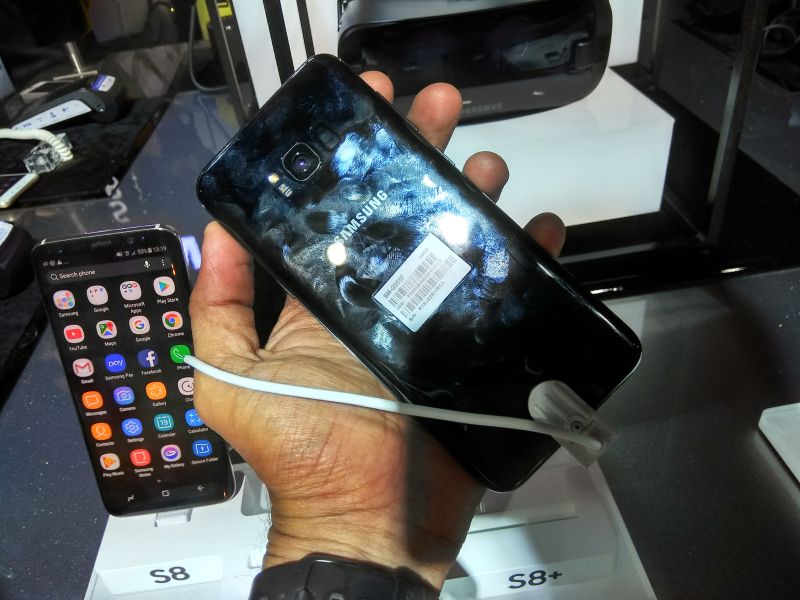 Another highlight we would love to mention is Bixby – Samsung’s own AI assistant that will not compete against the likes of Google’s Assistant and Apple’s Siri. A dedicated physical button on the side brings up the digital assistant to your service. However the new AI assistant is not up to the mark and need a lot of improvisation. Samsung has presently put Bixby on hold and will roll out the service to all handsets soon. The new intelligence needs to learn new languages and accents before coming to life.

However, you sill have Google’s Assistant will always be at your service.

The Samsung Galaxy S8 and S8+ have finally been announced in India for a price of Rs 57,900 and Rs 64,900 and will start shipping in the country from May 7. The two models will be available in three colour variants – Midnight Black, Coral Blue, and Maple Gold colours.

Surely, there will be many phones launching soon that can do almost identical jobs for less than half the amount here. But with innovative features, eye-catching designs and Samsung’s aggressive marketing, the Korean giant is surely going to see these phones in many, many pockets.