Huawei talks up own apps with Mate 30 challenge to Apple, Samsung

The Chinese firm said its new Mate 30 Pro and Mate 30 devices were more compact and their cameras more sensitive. 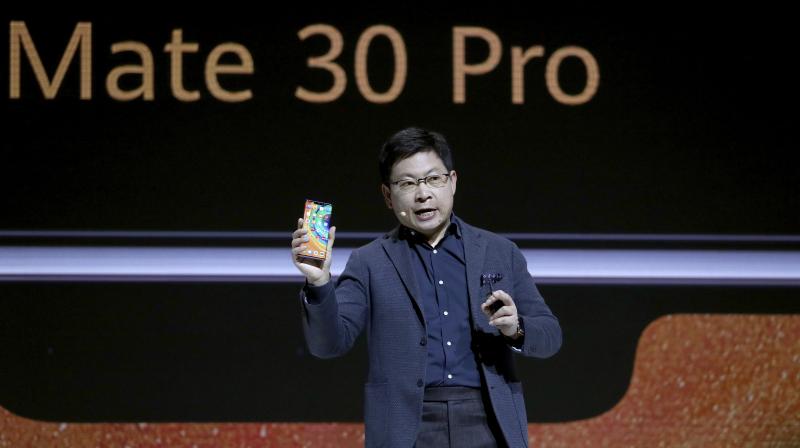 It was Huawei’s first launch of an all-new smartphone since US President Donald Trump hit the world’s No. 2 player in the market with a US export ban in May.

Huawei unveiled its new smartphones to challenge Apple’s iPhone 11 on Thursday, talking up slick design and best-in-class features while playing down concerns about the lack of access to Google’s popular apps.

At a glitzy launch in the German city of Munich, the Chinese firm said its new Mate 30 Pro and Mate 30 devices were more compact, their cameras more sensitive, and wraparound screens more vivid than those of the latest Apple iPhone.

It was Huawei’s first launch of an all-new smartphone since US President Donald Trump hit the world’s No. 2 player in the market with a US export ban in May.

Washington has effectively barred US firms from supplying Huawei, alleging it is a national security risk as its equipment could be used by Beijing to spy - something the Shenzhen-based company has repeatedly denied.

The result is the Mate 30 lacks access to a licensed version of US Google’s Android operating system, as well as mobile services that include its Play Store and popular apps like Gmail, Youtube or Maps - all victims of the ban.

Huawei pressed ahead with the launch regardless, betting that the Mate 30’s design and hardware would still win fans.

“This is the best-performing smartphone in the world,” Yu told a news briefing.

“Yes, we have some limitations on Google Mobile Services. But we have a huge advantage with the phone itself.”

The Mate 30 Pro’s three-camera array is able to bring images to life in low light. Its on-board video camera has a fine definition of 40 megapixels and, in super-slow motion, a speed of 7,680 frames per second that is several times that of its nearest rival.

The 6.53-inch flex OLED screen wraps further round the body than earlier models, making it possible to fit a display larger than the one on the iPhone 11 Pro Max, onto a smaller device.

Huawei also has a luxury Porsche Design model for 2,095 euros.

The build-up to the Huawei launch was overshadowed by uncertainty over whether buyers of the flagship Android device will be able to use apps supported by Google, a unit of Silicon Valley giant Alphabet.

Instead, the new devices will carry Huawei’s own app gallery, while the company will spend USD 1 billion to promote the system around it. In another incentive to boost its appeal, Huawei is charging app partners a commission of 15 per cent - half the cut taken by Apple and Google.

The phones will run on an ‘open-source’, or generic, version of the Android operating system - like Huawei’s phones in its Chinese home market. That option means that some apps may not work properly or run smoothly, say experts.

Holding the launch in Europe underlines the importance of the 500 million consumers in the region, where Huawei lost five percentage points in market share since the US ban, even as buyers rallied to its brand at home.

Without Google on board, however, analysts say Huawei may struggle to win over consumers.

“Even though this phone is filled with lovely features we don’t think it will sell like past generations,” said Annette Zimmermann of consulting firm Gartner.

“The average user will not accept that they do not have easy access to their favourite apps,” added Zimmermann, who attended the event.

Huawei says the phone’s ‘brain’ - the Kirin 990 chipset unveiled at a recent tech fair in Berlin - outperforms the Qualcomm-powered 5G rivals already on the market from Samsung.

In particular, the ‘big core-tiny core’ configuration of the hardware means it can run power-hungry applications like artificial intelligence or support online gaming, while saving battery on routine tasks.

“Huawei has Apple soundly beaten when it comes to form factor design but even these beautiful-looking devices are going to struggle to see any volume without the Google ecosystem,” analyst Richard Windsor said in a note ahead of the launch.