There is more to Agra than the stunning monument of love. 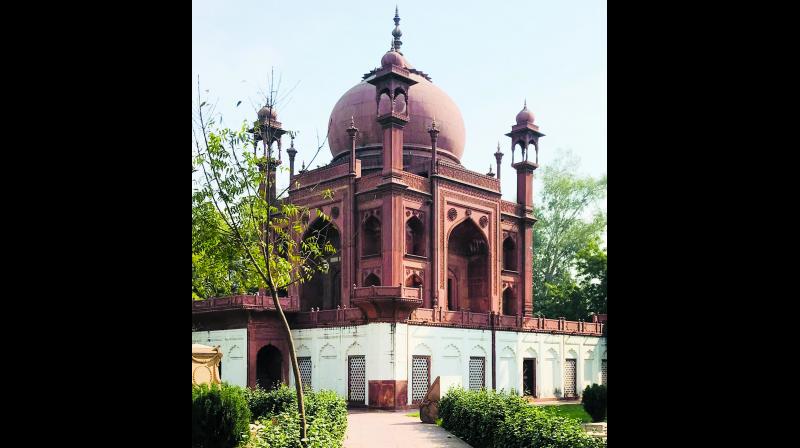 I have been to Agra several times on a day long trip and it was largely to visit the Taj Mahal, considered one of the eight wonders of the world.  But sometimes our perceptions can be misplaced as I discovered when I was recently invited by the Tourism Guild of Agra to explore the city beyond the Taj. Honestly, my first reaction was what could Agra have more to offer, but I was soon to discover otherwise.

I began my day with the colonial heritage tour and our first stop was at John Hessing’s Tomb, I honestly thought it will be just an ordinary Tomb but was amazed by the beauty of this unknown Red Taj Mahal. This is also a symbol of love –  John Hessing was a Dutch traveler who joined the Maratha troops in Agra as an army officer. Just like Shah Jahan, who built the Taj Mahal as a symbol of his love for Mumtaz, this sandstone Taj Mahal was built by John’s wife Anne after his death to express her love for John.

You can find this unique Red Taj Mahal in Agra’s Roman Catholic Cemetery, which a part of the archaeological survey of India. This cemetery can overwhelm you as you can spot a number of headstones from Armenian and Portuguese traders to Italian jewelers who were employed by the Mughals, to even catholic nuns, which are laid to rest.

As a kid, I was always passionate about visiting old churches, that’s why the next stop was one I looked forward to and this was Akbar’s Church, This church was built in 1598 by a Jesuit father under Akbar’s order and served as a Cathedral of Agra till 1848.

This place made appreciate Akbar for being a secular ruler. But the interesting story about the church was that it was demolished in 1635 and was rebuilt by the same person (Emperor Shah Jahan) in 1636. After the Portuguese become too ambitious in Bangal, Shah Jahan destroyed the church to punish the Christians but rebuild it after the Portuguese made peace with him. So finally on September 8 1636 the church held its first holy mass.

While I was excited to roam in the lands of the great Mughal Empire, having great Indo-Persian monuments, it came as a revelation when I discovered that this city had a sizeable Christian population as well. St. George’s Cathedral located in the cantonment area, in Sadar Bazaar is a church build in the colonial era; this place was our next destination, This church has been maintained well considering that it was built by Major General John Theophilus Boileau in 1828. John was an engineer who first came to India in 1822. He was the man responsible for the architecture and style of this English Gothic church that still draws the attention of nearby Christian communities and tourists.

Is there more history here? Yes, the next fascinating place to be seen in the list was Munshi Abdul Karim’s Tomb. Yes, you heard it right another Tomb having a lot of history belonged to an ordinary clerk, who graduated to becoming a Royal servant to Queen Victoria.

Agra is truly indeed full of surprises this time. Abdul Karim better know, as Munshi was an attendant of Queen Victoria back in the day from 1887 – 1901. Karim was born in 1863 in Lalitpur near Jhansi. He was once just a clerk whose fortune turned around and become one of the two Indians to be selected as a servant to Queen Victoria. Victoria took a great liking to Karim and gave him the title of ‘Munshi’.

Karim had a close platonic relationship with the queen made and this made him quite powerful during her regime. He was so thankful to her that Karim ended up donating land to build the Queen Victoria Girls College in Agra. Not just that, he even helped to arrange finance for building a statue of Queen Victoria in the Victoria Garden near the Taj Mahal in Agra.

But our trip had not yet ended; we also had a quick stopover at St: John’s College, this building was built in red sandstone in Indo-Saracenic style of architecture and was established in 1850 by the church Missionary society of England in 1840. This beautiful structure makes you want to become a college student once again.

But clearly there is more to Agra like the ‘City Heritage Walk’ or cycle tour but I leave that for my next visit and that should happen soon!