Drive to see how safe it is

Sangeetha Sridhar is on a solo trip across 150 cities in India to prove a point. 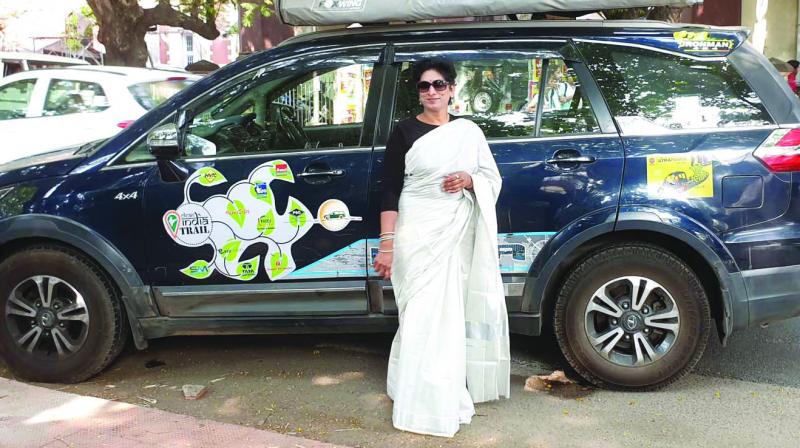 Sangeetha Sridhar is on a mission. The UAE expat has embarked on a solo drive across 150 cities in India. That means she will pass through 29 states and five Union Territories. However, that is not the highlight of the six-month-long trip. As she drives, she will check the public toilet facilities on the way, the condition of the state as well as national highways and how safe India is for solo woman travellers.

Gandhiji’s visions inspired Sangeetha to embark on this solo trip. “It took me one-and-a-half years of planning,” Sangeetha says. She kick-started the trip from the Gateway of India, Mumbai, on August 12, 2018, and expects to return to Mumbai in the second week of April. She has covered over 43,000 km so far and was in Kochi recently.

“The journey has not been an easy one, mainly because I have to live inside the vehicle most of the time,” she says. The car she drives has been sponsored by Tata, automobile partner of the trip. She has modified it by removing the backseats and setting up a small living space there. A solar panel has also been installed which provides the power to operate the fan and charge her electronic gadgets.  MarkmyIndia is her tracking and navigation partner and Amul is her nutrition partner. “I also have the support of the Indian Oil Corporation Limited (IOCL) and have a few gift cards for fuel refills.”

Sangeetha uses public toilets on the way, speaks to swachhagrahis or sanitation motivators, and talks to school-college students on women empowerment, food and nutrition, adventure with a purpose and other inspirational topics. Visiting major tourist sites is another objective of the drive. “I am happy to see that women’s safety is given high priority in Kochi. Also, the Cochin International Airport is the world’s first green airport, running completely on solar energy. People here understand the importance of renewable energy,” she says.

Speaking more about Kochi, the thing that upsets her the most is the littering of garbage on the roads. “I wish there is a complete ban on plastic in a water-rich area and tourist destination like Kochi,” she says. Kerala has always impressed her with its rich heritage, ethnic food, rituals and modern facilities. But she was surprised by the hospitality given to a solo women rider and the support she received from Kerala.

“I have been thrown out of parking lots, and had sleepless nights due to mosquitoes inside the car. I have slept inside the car without any dinner,” Sangeetha says. “I have stayed at police stations, toll gates, and street sides, but I never faced any threat from any gentleman in India.” With the help of the Army, she crossed 25 international borders, some of them mountain passes including those in the Himalayas.

“Sexual harassment incidents are highlighted so much by the media. I wish  people know that a new India has arrived and women empowerment is here with a purpose and a clear cause. We are not here to compete with men, to show who is bigger, but to compliment men and to take India forward,” says Sangeetha.

She also talks about the importance of education, eating right and diet. Her husband Sridhar is CEO of a company in Abu Dhabi. Their son Aswath Sridhar is a robotic engineer in the US, who gives huge support to her mission.