Coming into land, the waves crash two metres high, enough to topple down me and do my kayak some real damage. 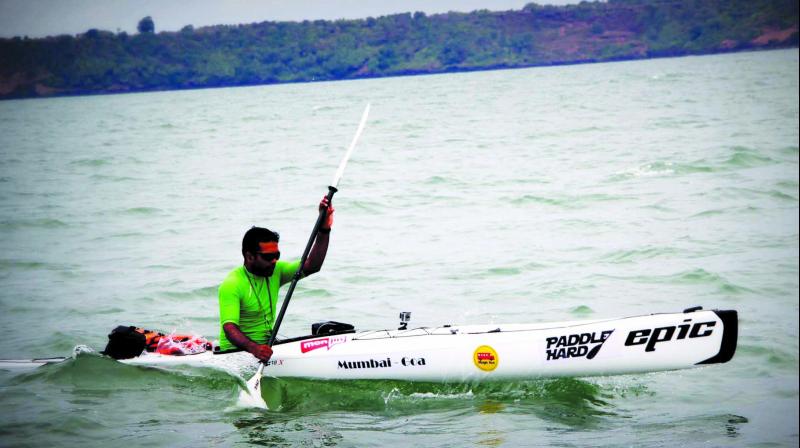 It’s day 10 of a 83-day kayaking mission from Dwarka to Kanyakumari. From my previous trip of kayaking from Mumbai to Goa, my daily routine was to head out a kilometre perpendicular to land, and maintain that distance as I made a beeline for the finishing point.

It’s day 10 of a 83-day kayaking mission from Dwarka to Kanyakumari. From my previous trip of kayaking from Mumbai to Goa, my daily routine was to head out a kilometre perpendicular to land, and maintain that distance as I made a beeline for the finishing point. As the land mass curves, I’d find myself a couple of kilometres out at the most. But Gujarat has been vastly different. For one, the winds. Large land  breeze would propel the massive windmills all pointed inwards. One minute I’m next to shore, the next minute the coast and the 100-metre-high windmills are a blurred line and I’m for kilometres from land.

Coming into land, the waves crash two metres high, enough to topple down me and do my kayak some real damage. Mul Dwarka has been kind, but with just one rest day so far, it’s been a rough 10 days. A calm morning to get out on the water. What is my average? How far am I from today’s destination? When can I reach there? The sun is taking its time heating up today, and I’m perfectly fine with it. But something is off. It’s not the wind though. It’s a decently still morning now that we are rounding the southern tip of Gujarat. And I’m picking up speed. Have I chosen to pick up speed? No. Have I been paddling quicker without knowing? When you’re a human powered vessel on a three-month expedition, you keep a steady pace. So, what now? Then it kicks in. Waves, kicked up by a headwind. The tidal effect of the Gulf of Khambhat. This is going to be fun. And, I just have 32 kms of it to do. I brace myself.

After four hours of twisting and turning and being sprayed with water left and right, I glance at my watch that says Diu is straight ahead. I can make out the stream that cuts off Diu from the mainland. I spot fishing trawlers. Only they aren’t coming straight at me. They’re plying dangerously close to the shore till they round a small lighthouse and then heading out to sea. As I sit there, I figure it out. A long line of reef. Hard cut, barnacled rock. And I’m headed for it. I kick into gear and make a beeline for the lighthouse. I’m now in the middle of the boats leaving and returning. Cut here, stroke there as I navigate between three big vessels, their crew calling out for me to stay clear.

As I put my feet on land after my five-hour ordeal, I drag my kayak up the white beach to realise that it weighs a ton. All that wave slapping found a way through the back hatch. And I’m carrying about 10 litres of water in the back. A little longer and I might not have evaded the reef or those fishing vessels. It’s day 10 and we’ve covered half of the first state. Just 5.5 states and 73 days to go.