18 Mar 2020  RiderGirl Vishakha: 'It's exciting to see how a man’s ego is hurt when I overtake him on the road.'
Travel

RiderGirl Vishakha: 'It's exciting to see how a man’s ego is hurt when I overtake him on the road.' 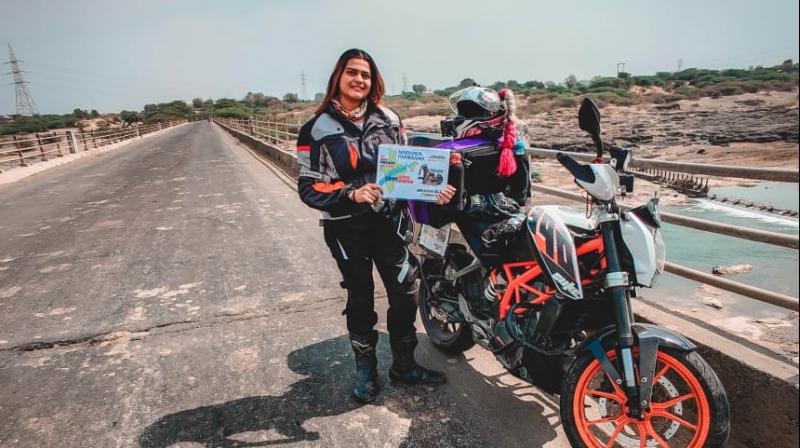 From sitting on her father’s bike as a toddler to riding solo across the country, motovlogger Vishakha Fulsunge — better known as RiderGirl Vishakha — has carved a niche for herself.

An MBA professional, Fulsunge learned how to ride a bike at the age of 12 and hasn't let go off it since then. From being the fastest girl in the KTM Circuit Race at Vroom 2016 — covering the difficult terrain of Leh — to being the first female rider to doing the whole Bay of Bengal coastline, the rider has proved her mettle.

The 26-year-old has now embarked on a 4600 km solo bike ride from Mumbai to Madhya Pradesh to spread awareness about the ‘Clean Rivers Initiative’ with the slogan ‘Save River Save Nation’ that focuses on the increasing pollution in the Narmada.  The motovlogger is encouraging people to undertake a parikrama around the river rather than bathing in the water using soap.

“I wanted to do something around water. If we do not take precautions now and keep the water clean, in future, we might not even have dirty water to clean and drink,” says the motorcyclist, who was on her way back to the Omkareshwar temple to end her parikrama.

“It has religious importance and people take it for a picnic spot. Mostly, I want to encourage the youth to take up parikrama as they are the future, and if they do it, then people will take note. The Narmada is the only river of which you can do a parikrama, so we should do what it is best known for,” adds Fulsunge, who carried with her stickers and a board declaring her slogan.

“The board says ‘Save the Narmada River’. Whenever I stop for water, tea, or lunch break, I stand with my board in my biking gear. When people are curious, I talk to them. Otherwise I just give out stickers,” smiles the vlogger, who has over 370k subscribers and over 17 million views on her YouTube channel.

While safety is a concern, taking up bike riding brought its own set of challenges for RiderGirl since the beginning. “When I started, the reactions weren’t encouraging. More than me, society was clear about my future, which is when I should finish college, get married and settle down. Everybody wanted me to just give up biking,” she recalls.

She adds that gender roles have affected even her ongoing trip as she was refused shelter at various places because she was a woman.

Nevertheless, there were moments when families took her in upon learning that she was on a parikrama and fed her. The biker girl notes that as soon as she rode across India, the narrative changed in society, giving her immense satisfaction.

“Exciting is how it hurts a man’s ego when I overtake them on the road. It is a wicked feeling. It is exhilarating,” smiles the motorcyclist, for whom biking is not just a profession but also her passion. So much so that at one point, she was searching for jobs that involved riding bikes.

“This is my love and passion. I did an MBA, but it was difficult for me to take up a desk job. I was frustrated after a point. When I started looking for jobs that had bike riding, all I could find was that of a delivery boy,” laughs Fulsunge, who then stumbled upon an international motovlogger’s account and found her calling.

“For most people biking is just for fun, but for me it is everything. I wanted to create memories so when I die, I will have a lot to look back on and secondly, I didn’t have anything to refer to when I started. This will now help the future generation of girls to learn from my mistakes and excel,” she concludes.