A screenshot from the past

The book also documents a fire that spread along the waterfront of Kochi destroying the premises and stocks of the company. 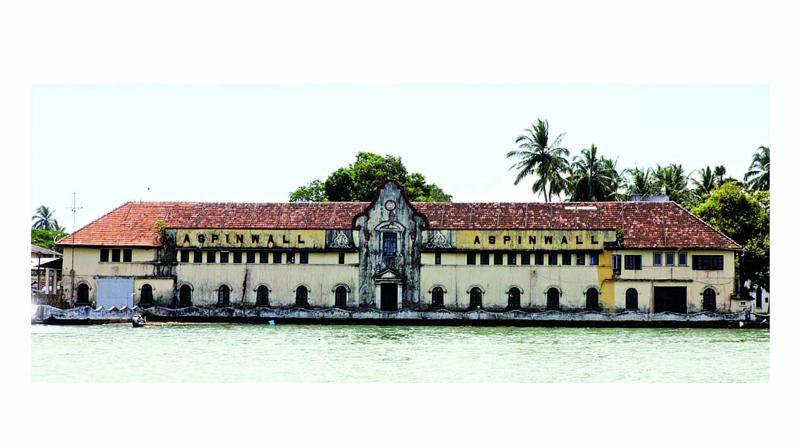 Though not exactly in mint condition, the remnants of its lost majesty are still evident.

The history of Fort Kochi is closely linked to that of the famous Aspinwall House — the waterfront property that was established in 1867 and still stands majestic against the Kochi skyline. Though dilapidated in parts and bereft of any activity, it was once a bustling centre of trade from where coconut oil, pepper, coir fibre, hides, lemongrass oil, ginger, turmeric, timber, cotton seeds and copra would be sent across the seas. The most substantial trading was in coconut oil, followed by pepper and then coir fibre and rope.

It took the Kochi Biennale for Aspinwall to metamorphose into a venue, thereby giving the crowds a peep into what was once a formidable compound surrounded by high walls. The compound still houses remnants of office buildings, a residential bungalow and a number of warehouses and other smaller structures. Though not exactly in mint condition, the remnants of its lost majesty are still evident.

Those enamored by the Aspinwall House and would love to spend some time understanding the importance it had in promoting trade and commerce, can now use the coffee table book titled 15 years of Making History — a time capsule to get lost in the interesting history of the Portuguese and the British trade, the rise and the fall of some of its owners and their contribution to the history of Kochi. For instance, how many know that J.H. Aspinwall was a prominent figure in Kochi who took a keen interest in the enhancement of the town and the trade? During the period 1875-78, he also served as the vice-president of Fort Kochi Municipality. He was also instrumental in proposing for the first time, the construction of a deep water port to allow steamers to enter the bay.

The book also documents a fire that spread along the waterfront of Kochi destroying the premises and stocks of the company. It recovered and went on to trade in coffee, moving on to new businesses like rubber plantations, all under subsequent owners. In 1956, the erstwhile royal family of Travancore acquired a small interest in Aspinwall House.