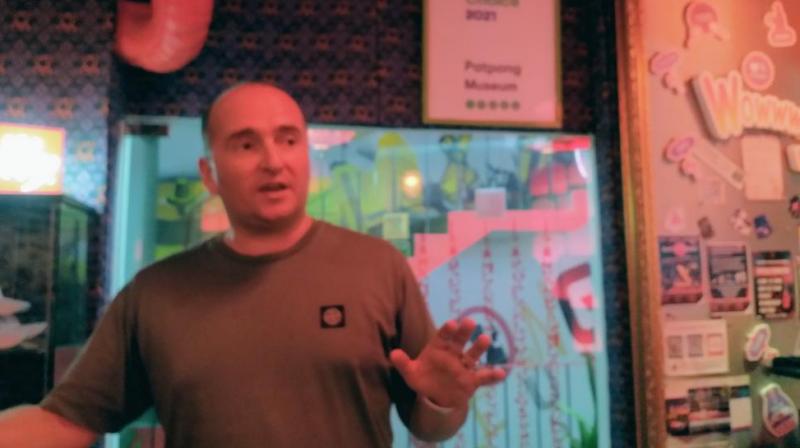 A tour of the unique Patpong Museum, said, and showed it all. (DC Image)

One of the newest, most talked-about museums in Bangkok is the Patpong Museum, based on the incredible history of the Thai capital’s most notorious nightlife district.

“Everyone expects Patpong Museum to be a sex museum, but the museum traces the 100-year-old social, political and cultural history of one of the most iconic areas of Bangkok which no one knows about,” says Michael Messner, long-time Austrian resident of the city, who set up this museum after 14 years of intensive research. He opened it in 2019, but was forced to shut it down during Covid. The museum was recently reopened to the public, after the addition of several important memorabilia.

Messner’s father was an artist from Vienna and he made his first trip to Bangkok, to cast bronze images for the family business. But his life changed, when he bumped into “the last, real godfather of Bangkok”, who introduced him to many parts of Bangkok, including the Patpong nightlife district. Before he knew it, Messner had opened his first bar there, and in time, as many as 10 bars. His interaction with numerous people in Patpong, including international visitors, introduced him to the incredible history of Bangkok’s famed sex life district.

A tour of the unique Patpong Museum, said, and showed it all.

One learnt that the story of Patpong started when a Chinese trader Tun Phu from Hainan migrated to Thailand more than 100 years back, and changed his name to Pun Phat. He became a very well established businessman, and was bestowed the title of “Luang Patpongpanich” by the Thai King. His son Udom went to the London School of Economics for his education. But when World War-II started, he moved to the US, and became part of the CIA training programmes.

This was where he encountered Jim Thompson, the famed American who moved to Bangkok, and started the Jim Thompson silk empire.

When he returned to Thailand, the Patpongpanich family bought a banana plantation at the edge of Bangkok, with a teak villa. They built many shop houses there, and Udom soon convinced well-known corporate, financial, travel companies, and even media houses, to set up offices there — everyone, from IBM to Caltex to Air France. It aimed to become the Wall Street of the city, and set up a modern power plant, cable lines, air-condition connections.

But it also became an undercover centre for CIA Operations, and the drugs trade.

It was after the Vietnam War, when the American soldiers filtered into Thailand, that the go-go bars and lounges opened. Sex, drugs, and rock and roll soon became the theme of the well-known bars which included the Grand Prix Lounge, and the Mississippi Queen, that were visited by many celebrities, including Bob Hope, Don King. William Dafoe. It was also visited by various infamous personalities, which included the notorious killer Charles Sobhraj. He lived in Patpong from 1975-76, and visited the bar often with his girlfriend, and even some of his victims. The clippings of his first killings in the city, reported by Bangkok Post newspaper, are all on display in Patpong Museum. In fact, a lot of the memorabilia in Patpong Museum came from the Bangkok Post Archives, including rare photographs, posters, videos.

Some of the well-known go-go bars, like the Black Pagoda, Madrid Bar, and so on, are re-created in the Patpong Museum. Many films were shot here, and excerpts from the films are on display, including the Oscar winning films Deer Hunters, Apocalypse Now, and others. The well-known character Colonel Kurtz, from the latter film, was based on a real-life character Tony Poe from Patpong, whose life story is enumerated in the museum.

The House of Fame video section, exhibits the many celebrities who visited Patpong — Jean Claude Van Damme, David Bowie, whose song “Ricochet” was shot here, and many others.

The go-go section in the museum has pictures and videos of the infamous go-go acts and shows of Patpong. There is even a fun ping-pong game, based on Patpong’s most notorious sex show.

That’s why the age bar for the museum is 18 years. There is a Lady Boy section, referring to the many transgenders in the sex business.

A unique addition is a gallery section, with portraits of the sex workers, by a top Thai artist. Some of the paintings were sold recently, and the money went towards an educational fund for the sex workers.

The Patpong Museum has already won the Museum Thailand Award, as “the best local and community museum”. It has also won the Trip Advisor’s Award, as a “top 10 per cent” attraction worldwide. Messner and his son Tennessee are proud of the museum, which has tours every half-hour. They hope to welcome Indian tourists soon.