The death toll from a cyclone in Mozambique and Zimbabwe rose to more than 300 as rescuers raced against the clock to help survivors. 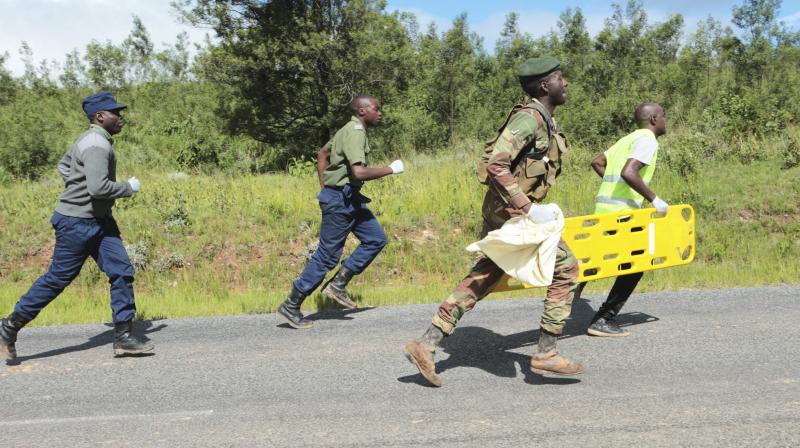 The UN, meanwhile, said that one of the worst storms to hit southern Africa in decades had also unleashed a humanitarian crisis in Malawi. (Photo:AP)

Beira: The death toll from a cyclone that smashed into Mozambique and Zimbabwe rose to more than 300 as rescuers raced against the clock to help survivors and the UN led the charge to provide aid.

"We already have more than 200 dead, and nearly 350,000 people are at risk," Mozambican President Filipe Nyusi announced Tuesday, while the government in Zimbabwe said around 100 people had died but the toll could be three times that figure.

The UN, meanwhile, said that one of the worst storms to hit southern Africa in decades had also unleashed a humanitarian crisis in Malawi, affecting nearly a million people and forcing more than 80,000 from their homes. Four days after Tropical Cyclone Idai made landfall, emergency teams in central Mozambique fanned out in boats and helicopters, seeking to pluck survivors from roofs and treetops in an inland sea of floodwater, sometimes in the dead of night. Air force personnel from Mozambique and South Africa were drafted in to fly rescue missions, while an NGO called Rescue South Africa said it had picked up 34 people since Friday night, using three helicopters.

"It is the only way to access the people that are stranded," Rescue SA's Abrie Senekal told AFP, saying the NGO was trying to hire more helicopters. Ian Scher, who heads Rescue SA, said the helicopter teams were having to make difficult decisions. "Sometimes we can only save two out of five, sometimes we drop food and go to someone else who's in bigger danger," he said.

"We just save what we can save and the others will perish." In Nhamatanda, some 60 kilometres (40 miles) northwest of Beira, 27-year-old Jose Batio and his wife and children survived by climbing onto a roof. But a lot of their neighbours "were swept by the water," he said.

"Water came like a tsunami and destroyed most things. We were prisoners on the roof," he told AFP after they were rescued by boat. The city of Beira, Mozambique's second largest city and a major port, was immediately cut off after the storm. According to the Red Cross, the cyclone damaged or destroyed 90 percent of the city of half a million people.

President Nyusi, speaking on Tuesday after attending a cabinet meeting in the ravaged city, said the confirmed death toll stood at 202 and nearly 350,000 were "at risk". The government had declared a national emergency and ordered three days of national mourning, he said.

"We are in an extremely difficult situation," Nyusi said, warning of high tides and waves of around eight metres (26 feet) in the coming days. On Monday, Nyusi had said he feared more than 1,000 had died and more than 100,000 people were in danger. Mozambique, one of the poorest countries in the world, was also hit by deadly floods in 2000 that killed 800 people and left at least 50,000 homeless.

The storm also lashed eastern Zimbabwe, leaving around 100 dead, a toll that could be as much as 300, local government minister July Moyo said after a cabinet briefing. "I understand there are bodies which are floating, some have floated all the way to Mozambique," he said.

"The total number, we were told they could be 100, some are saying there could be 300. But we cannot confirm this situation," he said. At least 217 others are missing and 44 stranded, officials said. Worst hit was Chimanimani in Manicaland, an eastern province which borders Mozambique.

Families started burying their dead in damp graves on Monday, as injured survivors filled up the hospitals, an AFP correspondent said. Military helicopters were airlifting people to Mutare, the largest city near Chimanimani.

The storm swept away homes and bridges, devastating huge areas in what Defence Minister Perrance Shiri said "resembles the aftermath of a full-scale war". Some roads were swallowed by massive sinkholes, while bridges were ripped to pieces by flash floods.

The UN World Food Programme (WFP) said it was mobilising aid for some 600,000 people, saying the world did not yet appreciate the scale of the "massive disaster". So far, it has dispatched more than five tonnes of emergency provisions to the affected areas.

"WFP aims to support 500,000 to 600,000 people in the coming weeks," spokesman Herve Verhoosel told reporters in Geneva. "I don't think that the world (has) realised yet the scale of the problem."

In Malawi, 920,000 people have been affected by the cyclone and 82,000 people have been displaced, the UN said. "OCHA (the Office for the Coordination of Humanitarian Affairs) has deployed resources to support assessments and information management, and UNICEF is deploying additional supplies to affected areas including tents, water and sanitation supplies and learning materials to affected children," it said.