Once taken away from their African mothers, these women now demand justice 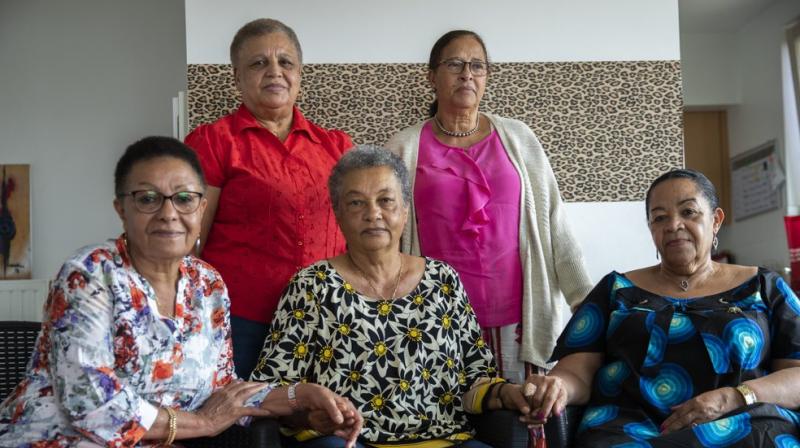 Clockwise from top left, Simone Ngalula, Monique Bitu Bingi, Lea Tavares Mujinga, Noelle Verbeeken and Marie-Jose Loshi pose for a group photo during an interview. These five women who were taken from their families as children in Belgian Congo and placed in a religious mission run by Catholic nuns have filed a lawsuit seeking reparations from Belgium. (AP)

Belgium: Monique Bitu Bingi was only 4 years old when she was taken from her family in Belgian Congo and locked up in a religious mission run by Catholic nuns. Her friend Lea Tavares Mujinga was even younger the day her mother was forced to give her up: just a 2-year-old toddler.

Born from a white settler father and a Black mother — and despised because of their biracial heritage — both girls were seized from their mothers and separated from their African roots by Belgian authorities that ruled over the area from 1908-1960.

During colonial times, they, like thousands of other biracial children known as “métis,” were taken away and raised in Belgian institutions as the colonial power promoted a strict separation of white and Black people and systematically tried to prevent interracial unions.

At the St. Vincent de Paul sisters’ mission, they went through years of deprivation and abuse that have left indelible scars.

“We have been destroyed, both morally and psychologically,” Bitu Bingi told The Associated Press on Monday, the eve of the 60th anniversary of Congo’s independence on June 30, 1960. “We have lost our identities. Excuses are not enough.”

Now in their 70s, Bitu Bingi and Tavares Mujinga want reparations. Along with three other biracial women born between 1945 and 1950 in the African country, they have filed a lawsuit in Brussels targeting the Belgian state for crimes against humanity.

Their complaint comes amid growing demands that Belgium reassesses its colonial past. In the wake of protests against racial inequality in the United States, several statues of King Leopold II, who is blamed for the deaths of millions of Africans during Belgium’s colonial rule, have been vandalized and a petition has demanded that Belgium remove all of his statues.

Last year, the Belgian government apologized for the state’s role in taking thousands of babies from their African mothers. And for the first time in the country’s history, a reigning king expressed regret Tuesday for the violence carried out by the former colonial power. In a letter to Congolese President Felix Tshisekedi, Belgium’s King Philippe conveyed his “deepest regrets” for the “acts of violence and cruelty” and “suffering and humiliation” inflicted on Belgian Congo.

Bitu Bingi, Tavares Mujinga and the three other women now live in Belgium and France after emigrating from Congo and have requested compensation of 50,000 euros ($55,000) each but are also seeking broad reparations for all children seized from their mothers and placed in institutions during the colonial era.

“There were official documents from the administration, it’s a state crime that was organized by the Belgian colonial administration,” said Christophe Marchand, a lawyer representing the women.

Tavares Mujinga said she was taken away from her family while her father, a Portuguese man who worked in the cotton industry, had left the country for a holiday. Bitu Bingi’s father worked for the Belgian administration.

According to legal documents, in all five cases the fathers did not exercise parental authority and the Belgian administration threatened the children’s Congolese families with reprisals if they refused to let them go.

Time has passed since the five women were forced to cut ties with their relatives, but the trauma they went through has never been fully addressed, and their pain remains immense. None of them has ever received psychological assistance.

“When we talk about it, we cry,” Noelle Verbeeken, one of the five plaintiffs, told the AP on the outskirts of Brussels.

“We have no identity. We don’t know where we come from. ... We are nothing. Just the ‘children of sin,’” Verbeeken said, quoting the expression used to describe the children when they arrived at the religious mission in the Congolese town of Katende. There, Tavares Mujinga was reunited with her older brother, who had been seized a few years earlier.

The women lived in the mission with 20 other biracial children and Black orphans in very harsh conditions. Bitu Bingi recalls that food was scarce, and rare were the days when she could properly wash.

“We did not know how chicken tasted. And one of the doors of our dormitory was overlooking the morgue,” she said.

The girls did receive an education. Tavares Mujinga, who went on to marry a Belgian airplane pilot, became a primary teacher while Verbeeken studied Greek humanities and became a nurse.

“They wanted to make nuns out of us. We had other plans,” Bitu Bingi said.

The women’s traumatic journey took a turn for the worse several months after independence when they and the other children were abandoned by both the Belgian authorities and the Catholic Church. The nuns and other mission personnel were evacuated amid political upheaval and the children were left on their own.

“There was no room for us,” Bitu Bingi said, recalling mutilated bodies around the mission during the post-independence unrest.

She doesn’t dwell on the sexual abuse and rape by Congolose militia fighters after the nuns left that is described in the lawsuit, which says the militiamen sent to the abandoned mission to look after the young girls molested them instead. Bitu Bingi was only 11.

To this day, she says she can’t help but think of the militia trucks whenever she hears the sound of a truck engine.

She found solace during a trip to South America decades later after finding out that her father had emigrated to Argentina to start a new life. She travelled there and finally met that branch of her family, a trip she said eased her suffering.

“My father was already dead, but I received a warm welcome,” she said.

Bitu Bingi and the women she calls “sisters” now hope their lawsuit will lead Belgium to finally recognize its responsibility in their suffering and in the pain of the thousands of other children who were snatched away.

“What we expect, and what they expect, is a reparation law, a strong decision,” said Jehosheba Bennett, another lawyer for the women. “Telling the stories of what happened during the colonization is really important because now there is not much awareness about this.”