At least 45 killed, over 100 injured in fuel tanker blast in Nigeria

The blaze began when a bus tried to pass the scene and its exhaust pipe scraped along the ground causing sparks to fly. 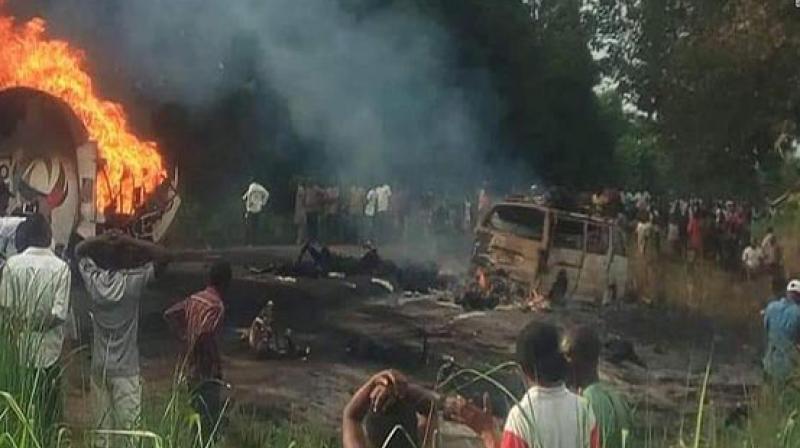 People walk amid burned cars after an oil tanker exploded on a highway in Nigeria. (Photo: AFP)

Ahumbe: At least 45 people were killed and more than 100 injured in central Nigeria when a petrol tanker crashed off the road and exploded as people gathered fuel, the emergency services said on Tuesday.

The truck overturned close to shops as it was travelling through the village of Ahumbe in Benue state on Monday.

Local residents rushed to collect the leaking gasoline for over an hour before the fuel caught fire, causing a blast that tore through the surrounding area.

"From the look of things and considering their condition, many of them might not survive."

Baba said a pregnant woman and at least two children were among those who had died and two firefighters had sustained serious burns.

He said the blaze began when a bus laden with passengers tried to pass the scene and its exhaust pipe scraped along the ground causing sparks to fly.

"Sixteen of the passengers in the vehicle, including the two children and the pregnant woman, were instantly burnt to death," Baba said.

Police and emergency services crews were working to clear the tanker's charred hulk from the road, an AFP reporter at the scene said.

At least one building was gutted by the explosion. Locals spoke of their shock.

"I lost a brother and two others are seriously burnt and in the hospital. They were trapped in the fire when the truck exploded for a second time," resident Ade Derfer told AFP.

Earlier a spokesman for the local council said that over 64 people were killed in the incident, but the police did not give a toll.

Petrol tanker and pipeline blasts are common in Nigeria, where despite the country's multi-billion-dollar oil and gas industry, most people live in poverty.

In January, at least eight people were killed in Odukpani, in the southeastern state of Cross River, in an accident of this kind.

In July 2012, at least 104 people were killed and some 50 others injured in the southern state of Rivers.