The victims are gunned down in their cars, shot dead outside their homes or killed at public events. 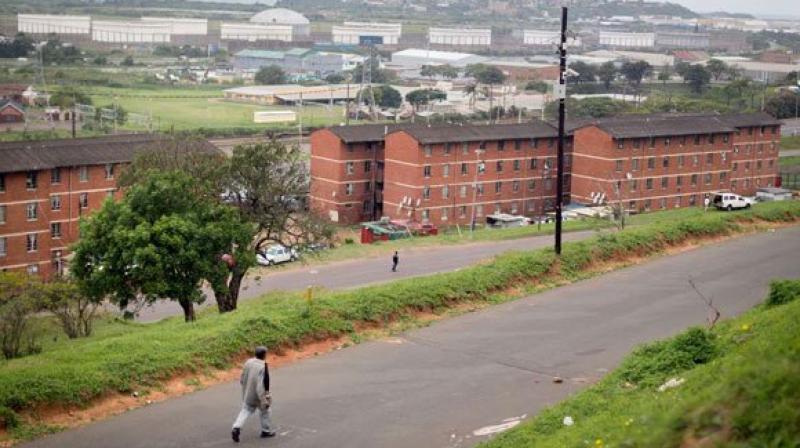 Violence has spread across the province on the country's east coast, but much of the killing can be traced back to hitmen hired from the notorious Glebelands complex of hostels in the provincial capital Durban. (Photo: AFP)

Durban: In the South African province of KwaZulu-Natal, local politics is a deadly game, with at least 40 people killed in politically motivated shootings since last year.

A battle for control is raging ahead of a conference of the African National Congress to choose a new leader when President Jacob Zuma steps down as ANC chief in December.

Violence has spread across the province on the country's east coast, but much of the killing can be traced back to hitmen hired from the notorious Glebelands complex of hostels in the provincial capital Durban.

The 71 lawless hostel blocks - originally built to house migrant workers - are home to about 20,000 people, often crowded into decrepit accommodation, sleeping more than 30 to an apartment and sharing a single toilet.

"Hitmen here are being used by the politicians," one Glebelands resident, a father of five dressed in a grey tracksuit and sitting under a bullet-scarred shelter, said.

"It looks like we have no government. We have been forgotten," said the 48-year-old man, adding that giving his name would put his life in danger.

Vanessa Burger, a community rights activist who works with Glebelands victims' families, has kept a detailed log of each killing by hitmen living in or hired from the hostels.

Burger's log now stands at 93 dead since 2014, with many of the victims linked to politics through factional fighting, tit-for-tat revenge killings and criminal associates.

But there have been few arrests. The low number fuels allegations that murders are sanctioned by some parts of local ANC branches and ignored by the police.

"If you are using hitmen from a specific area to take out rivals... that must have political support, otherwise they would have been removed a long time ago," said Burger.

"It needs political will to change the situation and I don't see that happening in the near future."

After sitting for a year, a judicial inquiry into the killings was due to complete its hearings last month, but has asked for more time to gather evidence.

"We have to extend until March next year because it's only now that the commission is gaining momentum," said Solo Mdledle, secretary of the Moerane Commission.

KwaZulu-Natal is the ANC's heartland. Whoever controls the province could determine the party's next leader from December.

In the run-up to the party conference, few weeks go by without an ANC provincial official or elected councillor being murdered in the struggle for power, jobs, money and lucrative government contracts.

The victims are gunned down in their cars, shot dead outside their homes or killed at public events, but the police and authorities seem helpless.

When former ANC Youth League secretary-general Sindiso Magaqa died in September after being shot 15 times in an ambush in July, his family laid the blame squarely with the party.

"We love [the ANC] but when they do this' we are scared... Everything points to December," Magaqa's uncle said at his funeral.

The culture of violence in KwaZulu-Natal was graphically demonstrated recently by an internet video of two bodyguards of an ANC regional secretary bragging they were about to kill someone.

"That dog is going to die today," one said as they sat in a car and cocked their pistols and an assault rifle.

KwaZulu-Natal is not new to political unrest.

It endured the worst of the violence in the final days of apartheid as the ANC fought against another black party, the Inkatha Freedom Party.

Zuma, who was born in KwaZulu-Natal, will remain in office after giving up the party chief post in December, but the new ANC leader will have a strong chance of succeeding him as president in 2019 elections.

The province is seen as divided among supporters of Deputy President Cyril Ramaphosa, Zuma's ex-wife Nkosazana Dlamini-Zuma and Zweli Mkhize, the party's treasurer.

Speaking in the small town of Harding, where four government officials have recently been murdered, Dlamini-Zuma told AFP that the killings must stop.

"We cannot continue with this kind of culture. Killing is a crime... so we cannot tolerate it," she said after addressing party supporters.

"Death threats is a completely normal mechanism for enforcing political control in that part of the country," said Richard Pithouse, a professor at the University of Witwatersrand in Johannesburg.

The country's Police Minister Fikile Mbalula recently said he was "very much confident that we will make major breakthroughs in relation to the killings".

But many analysts and activists worry that the violence points to a volatile general election in 2019.

The ANC provincial leadership, which admits that corruption and the battle for local positions are fuelling the assassinations, have vowed to stamp out the killings.

"We must address these things swiftly before the violence escalates," said ANC's provincial chairman Sihle Zikalala.